Home Lifestyle Hublot Goes Big on All That Glitters With a New Yellow Gold... 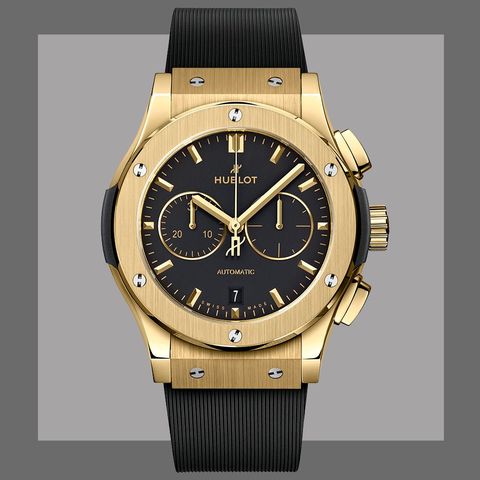 Welcome to Dialed In, Esquire’s weekly column bringing you horological happenings and the most essential news from the watch world since March 2020. This week marks the official beginning of a new year in watchmaking with LVMH’s Geneva Watch Week. It’s happening online, which means we can bring to you direct the brand-new launches, unveiled a few hours ago, from some of the luxury group’s storied Swiss brands.

Never knowingly understated, Hublot has been a celebration of cold hard flash since its inception in 1980. Founder Carlo Cracco’s first design, the Fusion, paired solid gold with natural rubber straps for the first time in a watch that looked like no other. It was a polarizing move and the first of many that didn’t always sit comfortably with the prevailing traditional sense of Swiss luxury.

When the watch industry’s favorite maverick, Jean-Claude Biver, joined the brand in 2004, Hublot took that DNA and supersized it. In 2005, Hublot launched the Big Bang, an outsize watch in a new sandwich case construction that managed all at the same time to be simple and complicated, elegant and unmissable. Even the name was a hearty, one-fingered poke in the eye of convention. It proved an instant hit, garnering major watch industry accolades the same year.

While much of Hublot’s out-of-the-box thinking of late has brought forth unforgettable limited-edition collaborations—like its recent Takashi Murakami flower watches—and new materials, like forged carbon, colored ceramic, and even colored sapphire crystal cases, it’s reassuring to know that in 2022, amongst all that innovation, there’s still nothing wrong with gold old yellow gold.

Yellow gold proved for a while (indeed for much of the past 20 years) something collectors linked with flashy 1970s and 1980s tastes. Much of the refined end of the industry stayed away and went instead for the relatively subdued luster of rose gold. It’s only recently that yellow gold has made something of a comeback. Hublot, however, has never had an issue with knowing where its customer’s head is at. As if to prove the point, the house today unveiled a collection unified by its love of the shiny stuff. 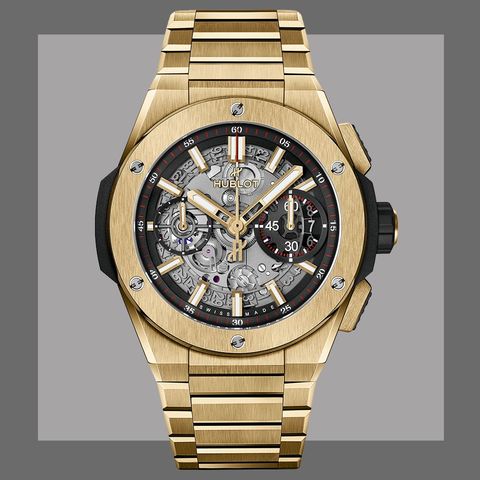 Across six watch designs, the house goes back to the original founding cocktail of yellow gold and rubber starting with the Classic Fusion Chronograph—for the first time in gold in a 42mm size. At the other end of the scale is the Big Bang Integral, whose case, bezel, and bracelet are entirely made in gold. Should that not prove baller enough, you can also have the whole thing, strap and all covered, in two all-over diamond configurations. The remaining styles include the Big Bang Unico, which features an in-house Unico movement and a case that combines brushed and polished gold as well as deep black details and a skeletonized display, and the Spirit of Big Bang in a tonneau shape with an in-house movement echoing the mixture of brushed and polished gold with a black skeletonized movement. 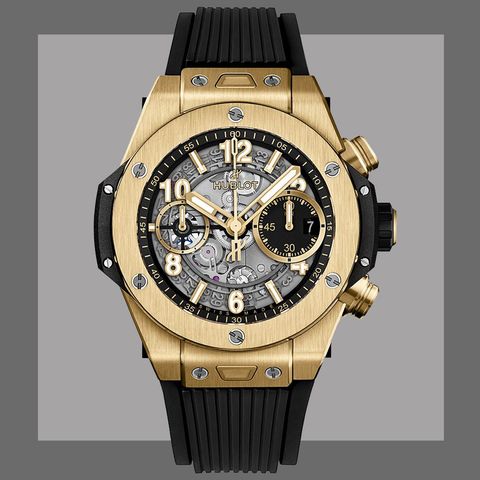 None of these watches are shy and retiring; neither are the prices. But Hublot’s penchant for thinking through everything to the nth degree, and creating memorable, beautifully crafted timepieces in the process, has built a strong following among the ballerati and a deal of respect from its fellow Swiss watchmakers for both its ingenuity and its finishing. One glance at the prices may tell you that you don’t have the dough to buy one, let alone all six. It might not even be your cup of tea. But you will certainly be impressed.

The 10 Best Sports Headbands Will Keep Your Brow Sweat-Free

This Unbeatable Crossbody Bag Is a Steal Right Now

Junior WRC Embarks Upon The First Gravel Round Of The Season...

InterContinental brand to debut in Crete

UK’s tourism sector to create 700,000 jobs over the next decade