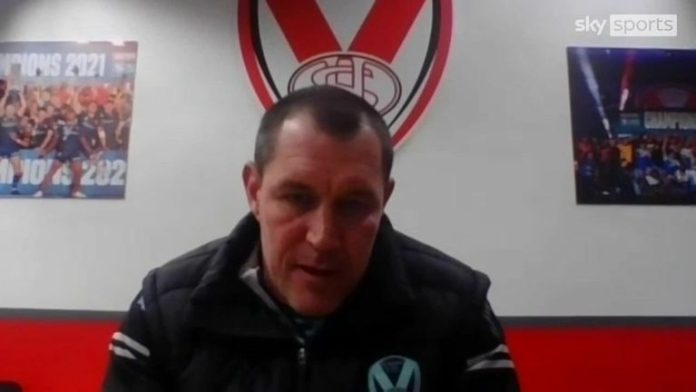 Hurrell was finally able to contact his family in Tonga after facing days without knowing whether they were safe or not. “I can’t imagine that time when it happened, and I hope a lot of people overseas have heard from their families and their families as well,” he said

Konrad Hurrell has opened up on the emotions he went through waiting for news from his family in Tonga following the tsunami which struck 10 days ago.

Like his compatriots and those with connections to Tonga in Super League and the NRL, the St Helens centre was left to anxiously wait for communications to the Pacific island country before he was able to find out whether his family were safe.

When he was finally able to contact his father and sister, Hurrell was relieved to hear his family were safe and well, and admitted it was difficult to comprehend the circumstances they had faced.

Thank you all for the messages. Appreciate you all 🙌🏽 pic.twitter.com/kgOEeo5k8g

“It has been tough,” Hurrell told Sky Sports News. “I don’t have the words to describe or imagine what they’ve been through, but it’s just trying to be strong.

“But, at the same time, they all work together to get through it. I can’t imagine that time when it happened, and I hope a lot of people overseas have heard from their families and their families as well.”

Hurrell is one of three St Helens players who are Tonga internationals along with fellow new signing Will Hopoate and forward Agnatius Paasi, while head coach Kristian Woolf is boss of the Tonga national team.

The RFL has already announced the funds raised from this year’s Combined Nations All Stars jersey for the clash with England in June will go towards aid for those affected by the tsunami and Woolf hopes rugby league does its bit to support the nation.

“After everything has been assessed, I certainly hope with the presence of Tonga in the rugby league community and the number of Tongan players that rugby league does what it does best, and that’s come together to support those players and the Kingdom of Tonga,” Woolf said last week.

“One thing I do know is Tonga is full of very tough and strong people, and they will pull together and come through like they have done many times before.”

Hurrell is preparing for his first season in a St Helens shirt following an off-season switch from Leeds Rhinos, becoming one of the stars of Super League during three seasons at Headingley.

Last year I hated Saints because they always beat us, now I’m involved in that team and wanting to be at their level as well.

The 30-year-old is set to fill the void in the centre at Saints left by the departure of Kevin Naiqama and has quickly settled into life with the club which has won the past three Grand Finals.

Hurrell is taking nothing for granted though and is determined to raise his own game to ensure he is a regular starter as St Helens bid for an unprecedented fourth-straight Super League crown.

“Just being around the boys now, it is pressure but at the same time the boys love seeing other teams want to beat,” Hurrell said. “It’s good to be in a team where teams want to be at their level.

“Last year I hated Saints because they always beat us, now I’m involved in that team and wanting to be at their level as well.

“I guess there is always pressure there; they won three in a row and are hopefully are going to go for four [in a row].

“The pressure is always there, but we’re going to focus on us first. No matter what the pressure outside, the boys are focusing in-house and what we need to work on.”

Sky Sports will again be broadcasting extensive live coverage of the Betfred Super League in 2022, including 25 games between February and April, Magic Weekend and the Grand Final. Watch reigning champions St Helens kick off the new season at home to Catalans Dragons in a rematch of last year’s Grand Final on Thursday, February 10.

Ready for the French Open? Here’s what you need to know ahead of Roland Garros