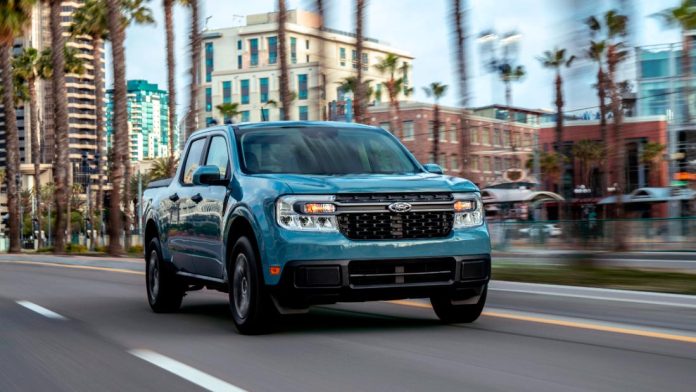 The halt specifically applies to “retail orders,” though, so government and business fleet buyers will still be allowed to order trucks after Thursday. Ford did not say how many Maverick orders the automaker has already collected.
Across the industry, automakers have been dealing with problems getting needed parts to make vehicles, particularly computer chips. Ford did not specifically cite any particular production issues with the Maverick, though.
The cause of the halt on orders could be combination of factors, said Brian Moody, executive editor at Autotrader.com.
“I wonder if it’s not a little bit more popular than they expected combined with continuing supply change issues,” he said.
The Maverick first went on sale this fall, becoming the third pickup in Ford’s lineup after the F-150 and mid-sized Ranger. Before the Maverick, Ford hadn’t had a genuinely compact truck in its lineup for almost a decade. The original Ford Ranger went out of production in 2012. At that time, Ford cited a lack of demand for small trucks. Also, the old Ranger didn’t share engineering with any other models, making it a tougher business proposition for the automaker.
Last August, before the Maverick went on sale, Ford had said it had already received 100,000 orders for the truck. The company has not provided any updates on orders since then. But like the truck itself, Ford Maverick’s actual sales are tiny compared to those of the much bigger F-series pickup which is the best selling vehicle of any kind in America. In December, 2021, for instance, Ford sold over 62,400 F-series trucks compared to just over 6,000 Mavericks. In total, Ford sold over 13,000 Mavericks since the truck first went on sale in October. F-series trucks are produced at four different Ford factories, though, while the Maverick is produced at just one.
The Maverick shares much of its engineering with the Ford Escape and Bronco Sport crossover SUVs. It’s built in the same Ford factory in Hermosillo, Mexico where the Bronco Sport is made, and the Maverick is available in both hybrid and non-hybrid versions. The hybrid version is the least expensive entry-level truck, with a starting price around $20,000. That’s unusual since, usually, a hybrid version of a vehicle, with electric motors and powerful batteries in addition to the gas engine, costs more than a purely gasoline-powered model.
The truck’s low starting price seems to be a major attraction, said Ivan Drury, an analyst with the automotive website Edmunds.com. Mavericks have been selling at prices averaging about $28,600 including options which is much lower than average new vehicle price of about $46,000. Also it is genuinely selling quickly, he said.
“This thing is turning over as fast as any vehicle in the industry,” he said.