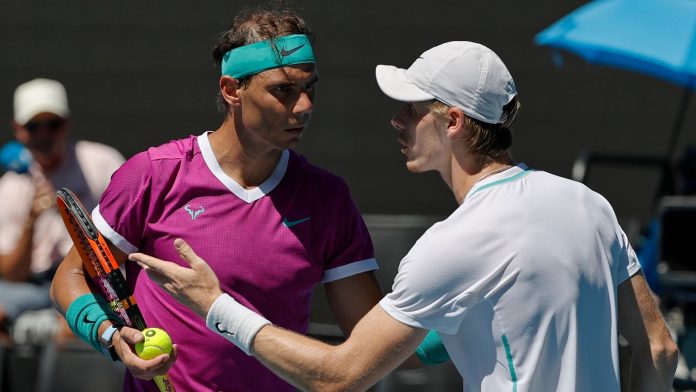 Denis Shapovalov alleges Rafael Nadal is given unfair advantage by officials, saying: “It’s like, where is the line? I respect everything that Rafa has done and I think he’s an unbelievable player. But there’s got to be some boundaries”; Nadal denied the Canadian’s accusations

Denis Shapovalov claims it is “unfair” how Rafael Nadal receives preferential treatment from umpires following his fiery Australian Open quarter-final exit at the hands of the Spaniard.

The Canadian was involved in a heated exchange with umpire Carlos Bernardes during his five-set defeat to Nadal on a steamy afternoon at Melbourne Park.

After Bernardes refused to give Nadal a time violation, the 22-year-old shouted: “You guys are all corrupt,” and he and Nadal then exchanged words at the net about the matter.

Shapovalov went further in the press conference room, alleging that the 20-time Grand Slam champion is given an unfair advantage by officials.

“I think I misspoke when I said he’s corrupt or whatever I said,” explained Shapovalov. “It’s definitely emotional, but I do stand by my side. I think it’s unfair how much Rafa is getting away with.

“I’m completely ready to play and the clock is ticking, clicking towards zero, and I’m looking at the umpire and obviously I’m going to speak up and say something.

“I’ve been ready to play for a minute and a half and he tells me he’s not going to give him a code violation because I’m not ready to play. To me, it’s a big joke.

“And then after the fourth set, last year I wasn’t allowed to take a toilet break when I asked for a medical. He had already taken two medicals. He was getting medically evaluated, and after the evaluation, the guy goes and takes a toilet break.

Asked if he feels Nadal receives preferential treatment, Shapovalov said: “Of course. One hundred per cent he does.”

I never feel that I had advantages on court, and I really believe that he’s wrong in that case. If I am not wrong, in the last couple of years we have a clock, we increase the measures to make the things more fair for everyone.

Later, Nadal refuted Shapovalov’s accusations and said he never felt he had an advantage on court, giving a forceful response when he was asked whether he feels he has earned the right for ‘special treatment’ during matches.

“No. Not in that case, no, no,” said the Spaniard. “I really believe that on the court you don’t deserve better treatment than the others. And I really don’t want it and I don’t feel I have it.

“Without a doubt, even as everybody knows, that I have a huge respect for Carlos, and I think he’s a great umpire.

“Is it not the case that he was always hard with me on court, no? No, no, I don’t think that’s the case.

“I really believe that sometimes it’s always in the mind that the top players get bigger advantages and honestly on court is not true. That’s my feeling.

“I never feel that I had advantages on court, and I really believe that he’s wrong in that case. If I am not wrong, in the last couple of years we have a clock, we increase the measures to make the things more fair for everyone.”

The row overshadowed a compelling contest and a huge achievement for Nadal, who doubted last year whether he would be able to come back from a foot problem and is now through to his 36th Grand Slam semi-final.

The 35-year-old, who is aiming to win his first Australian Open title since 2009 – and a record 21st major – said he was “sorry” for Shapovalov and felt the young Canadian will learn from his mistakes.

“I think he played a great match for a long time. Of course it’s tough to accept a loss like this, especially after I was feeling destroyed and probably he felt that, and then I was able to manage to win the match,” said Nadal.

“I wish him all the very best. He’s young, and we all make mistakes in our careers. I make a lot of mistakes too when I was younger, and probably he will understand later on after he thinks the proper way that probably he was not right today.”

‘Cheer’ star Jerry Harris sentenced to 12 years in prison in...

Kyrgios reaches first Wimbledon semi | ‘I thought my ship had...