Home Sport The Final Word: What next for Brady, Rodgers after playoff drama? 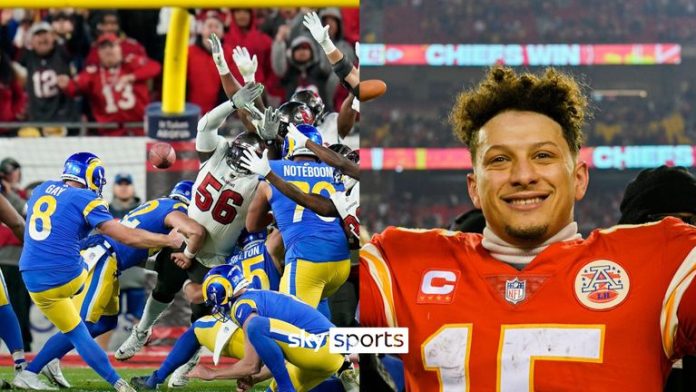 Sky Sports’ Neil Reynolds has the final word on a stunning Divisional Weekend in the NFL playoffs; join Neil and guests for Inside the Huddle, every Tuesday at 9pm on Sky Sports NFL as they look back on the best of the weekend’s NFL action…

This was the greatest NFL playoff weekend, ever! Ridiculous entertainment.

I can’t remember anything that has gone before coming close to it; I think we’ll be talking about this divisional round, and the games within it, for years to come. The stakes were so high, every game went down to the wire – and each were different in their own way.

It was the perfect embodiment of this season, which has just been crazy from start to finish. And, frankly, I got up on Monday morning feeling a little bit sad that it was all over.

The big takeaway for me from this game was Joe Burrow still just slinging passes even though he was sacked nine times – dropped more times than any quarterback in playoff history.

The second-year QB doesn’t ever blink. And his belief and confidence has changed the entire demeanour of a Bengals franchise that has been at the wrong end of the NFL for quite a few seasons.

He was terrific. As was their kicker, Evan McPherson, who said he was making the game-winning field goal, and they were going to the AFC Championship game, even before he went on the field for that final kick.

As for Tennessee, at some point they have to have more than just Derrick Henry. The defense did their part, but is Ryan Tannehill ever going to step up and play at the level of some of the other quarterbacks from this weekend’s games?

I don’t think he can, and I think that gives the Titans as a team a bit of a ceiling.

This one wasn’t necessarily a classic. It wasn’t a technically brilliantly played game at times, but it was still ever so enthralling and compelling. You couldn’t take your eyes of it – especially when there was a light dusting of snow covering Lambeau Field in the second half. It felt right, it felt like playoff football.

The 49ers have tremendous resolve. They rush the passer so well – Nick Bosa and Arik Armstead each had two sacks – and they went after Aaron Rodgers all day. He was sacked five times.

It was a great response from San Francisco, as we shouldn’t forget it looked ominous when the Packers marched down the field in 10 plays on the first drive of the game and scored a touchdown through A.J. Dillon. They quickly looked like they were going to do the same again, only for Marcedes Lewis to fumble and Green Bay never got going after that. It’s a massive win for the 49ers, but I feel like the Packers lost it as much as San Francisco won it.

It means that another chance for Rodgers to win the Super Bowl goes by. And there were very interesting comments from him after the game, about how he doesn’t want to be part of a rebuild. They’ve got a lot of salary cap problems in Green Bay, sitting $45 million over – only the New Orleans Saints have it worse – and that’s without even re-signing Davante Adams.

I think Rodgers is gone. I think he’ll carry on playing – he still feels like he has something to give; he’s likely to be named the back-to-back league MVP – but he’ll be thinking, ‘where can I go and win straight away?’

The Indianapolis Colts? The Pittsburgh Steelers? The Denver Broncos? He turns those teams into instant contenders. Or maybe San Francisco, and Trey Lance learns for another year? If Tom Brady retires, what about the Tampa Bay Buccaneers even?!

Talking of Brady, this game was set against the backdrop of reports coming out throughout the day of Tampa Bay’s 44-year-old quarterback seriously considering retirement.

Watching that game, with the Buccaneers trailing 27-3, I was thinking, ‘Tom, you can’t go out like this?’ So I started half-joking in the Sky Sports NFL studio about the fact he’d been down 28-3 in the third quarter before – in Super Bowl LI against the Atlanta Falcons.

I wasn’t really buying that the comeback was on but I was trying to keep the viewers engaged and have some fun in the studio. And then back he and the Bucs came. It was just a tribute to Brady’s winning mentality – he was not giving up.

I worry a bit about the Rams’ habit for blowing leads. They blew a 17-0 lead against San Francisco in Week 18 and lost but, also, for Matthew Stafford to step up and deliver that strike to Cooper Kupp – Ndamukong Suh right in his face – to set up the game-winning field goal, it reminded me why he has been brought to Los Angeles. It’s precisely for moments like that – to deliver on a big stage. The Rams have loaded up on veteran star power on their roster for one reason only, and that’s to win it all – and now they’re one step closer.

As for Brady, I think he might be done. Based on the noises I’ve heard coming out of Tampa.

I spent so many years at ‘Tom Brady’ Super Bowls, asking if this was his last game, but he’d just get stronger and stronger, to the point where I never even considered retirement for him this year.

I did not expect this playoff run to be his last, but the way he and the Bucs are talking, I think it could well be.

This wasn’t just the best game of the weekend, this is right up there in terms of the greatest NFL game ever! That ending, the last two minutes and overtime, I’ve never seen anything like it.

Patrick Mahomes had 177 passing yards after the two-minute warning. That is ridiculous! He and Josh Allen were just going back and forth, back and forth, touchdown after touchdown. You finally thought it was over with the Bills leading by three with only 13 seconds left, but then back come the Chiefs.

This was the one game that just left me feeling sorry for the loser. Neither of these quarterbacks deserve to be sitting at home and out of the playoffs. It wasn’t just good, it was historically great!

My one sour point on this game, making me sound a little like a grumpy old man, is you’ve got to let both teams have the football in overtime – Allen deserved to have the ball in his hands one last time to try to bring the Bills back.

It can’t end like that, with a Chiefs walk-off touchdown. It’s like getting to a penalty shootout and saying that the team taking the first pen can win it by scoring with the first one. The other team would be like, ‘what?!’

It actually happened to the Chiefs too. In the 2018 season, Mahomes never touched the ball as Brady drove the Patriots down the field and won the AFC Championship in overtime. Kansas City then asked for the rule to be changed, and Andy Reid even mentioned that after this game, still saying both teams should get the ball.

I get the reasoning behind player safety, I understand that, but how can this still happen in the playoffs? They have to change these overtime rules and I think they will – it’s always when things happen in big spots that prompts the NFL into action.

Join Neil Reynolds and guests for Inside The Huddle, every Tuesday from 9pm on Sky Sports NFL for a look back on the best of the weekend’s NFL action.