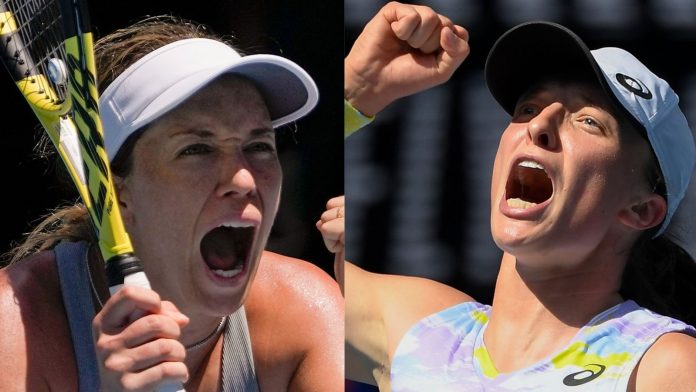 Former French Open winner Iga Swiatek stays on course for her second Grand Slam title by reaching the semi-finals of the Australian Open; the Pole will take on American Danielle Collins after she ended Alize Cornet’s dream run

American Danielle Collins will take on seventh seed Iga Swiatek in the semi-finals of the Australian Open.

Collins surged past Alize Cornet 7-5 6-1 to reach her second semi-final in Melbourne, while former French Open champion Swiatek battled from a set down for the second successive match to defeat veteran Kaia Kanepi 4-6 7-6 (7-2) 6-3.

🇺🇸 Danielle Collins fights her way back into the #AusOpen semifinals with a straight-sets win over Cornet! pic.twitter.com/BzqEvWLp4X

The powerful American, who also made the last four in 2019, was pegged back in the first set after an excellent start but dominated the second in hot conditions to win.

Defeat marked the end of an historic tournament for Cornet, who reached the last eight at a major for the first time at the 63rd attempt.

Swiatek, the 2020 champion at Roland Garros, rallied from a set and a break down in brutal heat to overpower Kanepi, despite committing 12 double faults.

Estonian Kanepi has a long-standing reputation for toppling big names at Grand Slams, with her fourth-round victory over second seed Aryna Sabalenka her ninth against a top-10 player at the majors.

Now 36 and ranked 115, Kanepi was trying to reach her first slam semi-final but, as she had against Sorana Cirstea, 20-year-old Swiatek showed her fighting spirit to reach the last four at a Grand Slam for the second time.

Salisbury and Ram won their first Grand Slam title here two years ago before losing in the final in 2021.

They are bidding to make it back-to-back grand slam titles after lifting the trophy at the US Open last September.