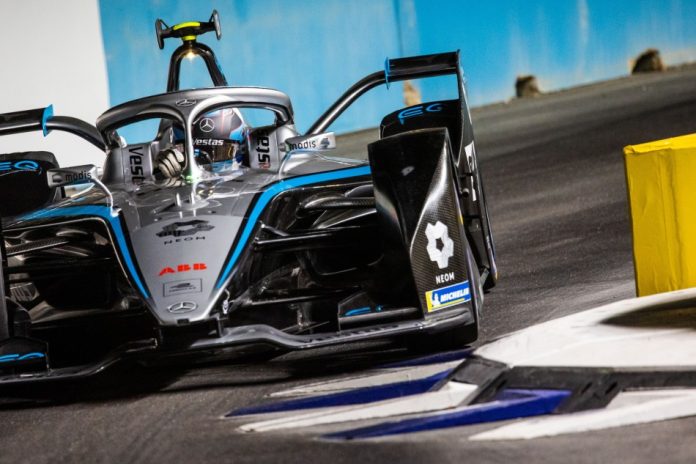 New faces, new rules and more power to play with – all the ingredients are in place for an electrifying campaign, beginning this weekend.

The forthcoming campaign marks the eighth season of the all-electric single-seater series, and the final one with the current Gen2 cars prior to the advent of the eagerly-anticipated Gen3 model in 2022/23.

Eleven months ago, the Riyadh Street Circuit staged Formula E’s first-ever night races, and competitors will again duel it out after dark this weekend, with the challenging, technical and quick 2.495km lap – snaking around the historic walls of the celebrated UNESCO World Heritage site – lit by LEDs.

As the defending champion, Nyck de Vries will be the man to beat and the Dutch was on fine form in Diriyah last year, converting pole position into a commanding lights-to-flag victory in the opener and posting fastest lap the following day. His Mercedes-EQ team-mate Stoffel Vandoorne similarly boasts a strong record at the track, notching up a podium double in 2019.

The other winner in Riyadh in 2021 was Sam Bird – the Briton’s second success in Saudi Arabia. He and Jaguar TCS Racing stablemate Mitch Evans were both title contenders right the way to the end last season, and will assuredly be in the mix for glory once more.

António Félix da Costa won the inaugural Diriyah ePrix just over three years ago, and the DS Techeetah star is fired-up to reclaim the Drivers’ trophy that de Vries took from him in Berlin last summer. Team-mate and fellow former champion Jean-Éric Vergne chased da Costa across the finish line in Riyadh in 2018, and the Frenchman is bidding to swiftly bounce back from the lowest championship placing of his Formula E career in 2020/21.

The consistent Robin Frijns was a pole-sitter and podium-visitor in Saudi Arabia last year, while Nick Cassidy in the sister Envision Racing entry is keen to translate the pace and promise he showed during his maiden campaign into the top step of the rostrum second time around.

Avalanche Andretti is a team with impressive prior form in Riyadh, having triumphed there in 2018 and 2019. The US outfit heads into battle with last season’s standout rookie Jake Dennis and Formula E newcomer Oliver Askew, who clinched the 2019 Indy Lights crown and will become the first American to contest the series since Scott Speed almost seven years ago.

2020/21 championship runner-up Edoardo Mortara set the pace for ROKiT Venturi Racing during the pre-season test in Valencia, and both the Swiss star and his new team-mate – 2016/17 title-winner Lucas Di Grassi – are previous podium-finishers in Diriyah.

The same can be said for André Lotterer, while countryman Pascal Wehrlein in the sister TAG Heuer Porsche car was a regular inside the top five at the Circuit Ricardo Tormo test late last year, where the leading 14 drivers were blanketed by less than half-a-second, auguring well for a fiercely-competitive campaign ahead.

Alexander Sims secured pole position for both Diriyah ePrixs in 2019 – converting the second of them into his breakthrough Formula E victory – and the Mahindra Racing ace is joined for Season Eight by compatriot Oliver Rowland, who has never finished lower than seventh in Saudi Arabia in five starts to-date.

The first Diriyah ePrix will get underway at 20:03 local time (18:03 CET) on Friday, 28 January, followed by the second leg of the double-header curtain-raiser at the same time on Saturday (29 January). Tighten your seatbelts, because sparks are about to fly…

The classification of the 2021 ABB FIA Formula E World Championship is available on the following link.