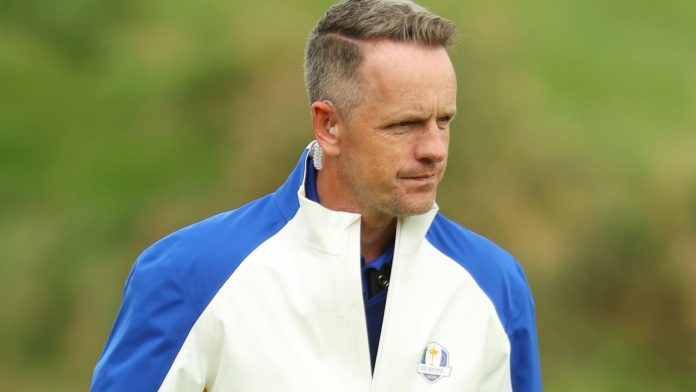 Luke Donald, Henrik Stenson and Robert Karlsson among the potential names under consideration to captain Europe for the 2023 Ryder Cup in Rome; watch Sergio Garcia in the Slync.io Dubai Desert Classic live on Thursday from 4am on Sky Sports Golf

Donald played in the biennial contest four times, including the record nine-point victories in 2004 and 2006, and was never on the losing side.

The former world No 1 was also a vice-captain in 2018 and 2021 and received the endorsement of defeated captain Padraig Harrington – who is part of the five-man selection panel – last week.

Garcia and Donald won five of their six matches together in the Ryder Cup and asked if the Englishman would make a good captain, Garcia said: “I think so, yes.

“He has good experience playing and being a vice-captain. I’m sure that he’s a great candidate for it, and he can do a great job if he gets the nod for it. So (I’m) excited to see what’s going to happen there.

“He might seem like a little shy, a little kind of closed, but he’s a wonderful man. He’s quite funny. He’s got a good sense of humour and a big heart, so those are important things to have not only as a captain, but as a person.”

Lee Westwood had been favourite to lead Europe’s bid to regain the trophy in Rome in 2023 following the record 19-9 defeat at Whistling Straits, but ruled himself out of the running in order to concentrate on his playing career.

Henrik Stenson and Robert Karlsson are the other candidates, and the appointment will be made by the three most recent captains – Harrington, Thomas Bjorn and Darren Clarke – along with DP World Tour player director David Howell and chief executive Keith Pelley.

Garcia: I still love the game

The Spaniard was speaking ahead of his first appearance of 2022, at this week’s Dubai Desert Classic, which begins on Thursday, live on Sky Sports.

Garcia, who won the tournament in 2019, says he is feeling good about his game ahead of his 24th full season on the DP World Tour.

“It feels good,” Garcia said. “I’m excited about it. Obviously I had a couple months off but put a little bit of work on it as soon as the new year came around.

“I’m excited to keep playing well and try to climb up on the World Rankings and everything about it.

“I love the game. I love the challenges that the game brings to you and I try to improve every time, every year when I come out here. At the end of the day, I think that’s the most important thing, enjoying what you do.

“Just keep at it, keep trying to improve, get better. Kind of have some good weeks so my world ranking gets even better than it is at the moment, and hopefully would be nice to get some wins in there.”

Watch the Slync.io Dubai Desert Classic this week live on Sky Sports. Live coverage begins with Featured Groups on Thursday from 4am on Sky Sports Golf, ahead of full coverage from 7.30am.