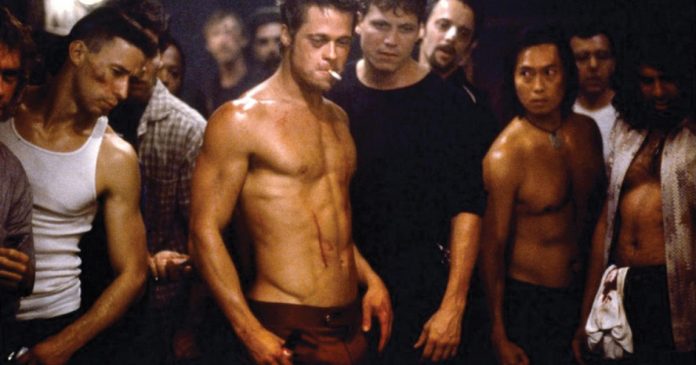 Beijing — The 1999 cult classic “Fight Club” is now available to stream — legally — in China, and internet users are buzzing over the version that recently hit streaming site Tencent Video. Many people who had already seen the movie thanks to China’s booming pirate video market quickly noticed some key differences.

The Tencent version is 12 minutes shorter than the original, and it has a very different ending. Somewhat paradoxically, the climatic ending of the U.S. movie, in which two high-rise office buildings symbolizing Western conformism and capitalistic consumer culture are blown up, has been removed.

Instead, a title card appears informing viewers that “the police rapidly figured out the whole plan and arrested all criminals, successfully preventing the bomb from exploding.”

The protagonist, portrayed by Edward Norton — and Brad Pitt as his split personality — was “sent to lunatic asylum receiving psychological treatment,” according to the Chinese version of events.

The buildings did fail to explode in the novel from which the movie was adapted, too, due to mistakes made by the protagonist as he mixed chemicals for the bomb. But that’s probably not why the edition for mainland China was altered.

In an interview with CBS News in 2013, Hollywood producer Janet Yang, who helped bring American movies to China, said some issues were deemed too sensitive for the tightly-controlled nation’s audience.

“Violence and sex — and I think anything that might create instability in society,” she said. “They’re not very comfortable with showing Chinese citizens behaving badly and not getting punished for it.”

China’s National Radio and Television Administration, the primary media regulator, has always had a problem with violent content, especially when it is in any way directed at officialdom.

Marvel antihero Deadpool never made it to China, for instance. Only the PG-13 rated re-edit of the sequel was theatrically released in the country.

In 2013, “Django Unchained” was abruptly pulled from theaters in China after being approved for distribution, and no reason was given for the reversal. Weeks later, a revised version was released without some of the more violent scenes.

It wasn’t clear which government agency might have ordered the changes to “Fight Club,” or whether the importer simply chose to self-censor the release to avoid having to pull it back down.

Either way, many viewers aren’t happy about the changes to the hugely popular film.

Users on China’s Twitter-like Weibo platform complained that the alternate ending could spark arguments between people who had only seen one version about how the story actually ends.

“I may have believed this ending if I was watching for the first time,” said one person in a post that included a screengrab of the end slate used in the Tencent version.

3 Cocktails That’ll Transport You to Bermuda