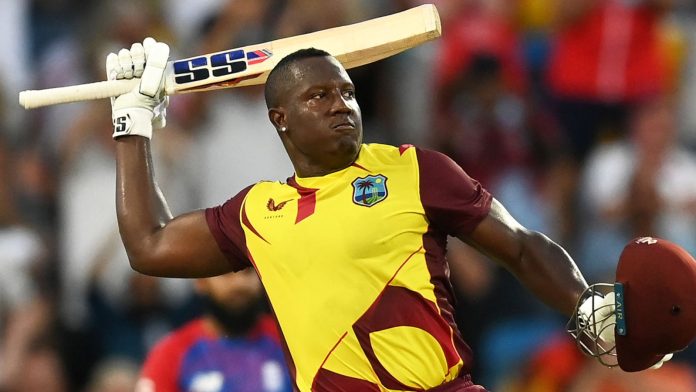 Rovman Powell hit 10 sixes in a blistering 107 from just 53 balls as West Indies beat England by 20 runs in a high-scoring third T20I to move 2-1 up in the series with two games to play.

Powell became the third West Indian man, after Chris Gayle and Evin Lewis, to score a T20 international century, as the hosts posted a mammoth 224-5 after being inserted by stand-in England captain Moeen Ali, who was deputising for Eoin Morgan (quad).

Banton fell in the 13th over but Salt then took over the heavy scoring and England still had a mathematical chance of victory when he hit back-to-back sixes off Romario Shepherd in the final over – the requirement 24 from four balls at that stage, meaning four more sixes were needed.

However, Salt was then bowled by a yorker next ball and England ended up on 204-9.

England must now win the final two matches, in Barbados on Saturday and Sunday, to claim a series victory.

The West Indies vs England T20 series comes to a conclusion in Bridgetown, Barbados this weekend with the fourth game on Saturday (8pm UK time) and the fifth on Sunday (8pm UK time).

The Women’s Ashes, meanwhile, continues with the standalone Test match in Canberra (Thursday-Sunday). Australia led the multi-format series 4-2 after the three T20 internationals, with the hosts winning the first game by nine wickets before the second and third matches were washed out by rain.

Sticking in Australia, and the Big Bash League final is live on Sky Sports Cricket from 7.30am on Friday as Sydney Sixers look for a third successive title when they face Perth Scorchers at Marvel Stadium in Melbourne.