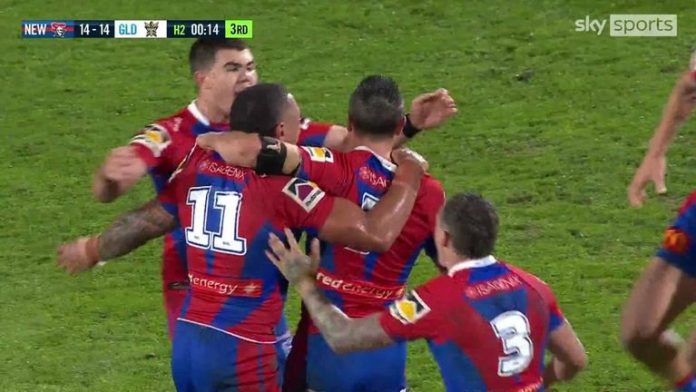 Ahead of the 2022 Betfred Super League season kicking off next month, Sky Sports’ Jon Wells runs down the key questions he wants to see answered; Sky will be showing extensive Super League coverage this year, including 25 live matches between February and April

My producer asked me recently what I thought were the key questions that needed discussion going into the 2022 Super League season.

For the purposes of this article, it turns out that “when is a party not a party?” didn’t qualify and, if it was all the same, would I mind just concentrating on Super League please?

And he was right, because there is more than enough going on in our sport at the moment to get my teeth into, without resorting to the facetious.

So, here are the five discussion points which pique my interest the most ahead of our Round 1 opener on February 10, and I’m not even going to mention the distinct possibility that St Helens will make history by becoming the first team in the modern era to win four successive Grand Finals.

Pearce and the man he replaced, James Maloney, have plenty in common; both vastly experienced halves, both State of Origin regulars over the last decade and both NRL Grand Final winners in 2013, playing alongside one another for Sydney Roosters. I would imagine the latter would have recommended the former as a successor and Pearce arrives in Perpignan ready to pick up where Maloney left off.

But Maloney has left quite a mark on the Dragons over the last two seasons; this is a man who has spearheaded the repositioning of the French club at the top table, and on their way to a maiden Grand Final appearance in 2021 he single-handedly won at least three games for them. Pearce has big shoes to fill.

So, to answer the first question, does Mitchell Pearce deliver the Dragons a Grand Final in 2022? Well, not necessarily. However, that is not to say the Dragons won’t lift the trophy at Old Trafford in September.

I just don’t think it has to follow that it will have been Mitchell Pearce who either got them there or got them over the line. He will, however, have played a major role – that goes without saying given his quality and influential on-field position.

The thing about great teams in sport though, is that whilst there will invariably be a star, a recognisable focal point – and for the Dragons in 2022 that man may well be Pearce (or it may be Sam Tomkins or Arthur Morgue) – those great teams are also always greater than the sum of their parts.

This is the real success story for the Catalans Dragons; they have managed to keep the key components of their side intact and on the occasion that they have lost a star they have replaced with a star.

The other thing about great teams in sport? They’re greedy. Because success is addictive. It is a high that needs to be replicated. This is a good team, on their way to becoming a great team – a great organisation, even – and I expect them to be bang there again this year.

2. Is the Leeds Rhinos rebuild complete?

If by “rebuild” we mean an expectation that the Rhinos are serious contenders once again for a Grand Final appearance at the end of the season, then yes, probably.

Why yes? And why probably? Well, let’s take a look at the headlines; in come Aiden Sezer, James Bentley, Blake Austin and David Fusitu’a, four wonderful signings. I think the new half-back pairing of Sezer and Austin more than offsets the departures of Robert Lui and Luke Gale.

As enigmatic as these two were as individuals, injury meant that their combination never really got out of the blocks in 2021. The expectation is that the two former Canberra Raiders team-mates and good friends Sezer and Austin will offer Richard Agar and company the “hive mind” that pushed the Raiders to the play-offs in 2016. James Bentley (attitude) and David Fusitu’a (12 games in two seasons) come with risks.

Can a Raiders reunion help Rhinos?

Richard Agar on how Leeds are aiming to get the best out of reunited half-back pair Blake Austin and Aidan Sezer.

But, if the former can moderate the over-aggression and petulance which surfaced too often in 2021, and if the latter can re-capture his 2018 form which saw him score 23 tries in 23 games for the New Zealand Warriors, then these two could be massive assets to a team already rich in potential and experience.

Speaking of which, there are two other really significant signatures the Rhinos have obtained in the last few weeks and an organisation’s retention decisions are as important as their recruitment decisions.

The re-signing of Harry Newman and Richie Myler, then, represent really good business. Now, “potential” used to be readily applied as a descriptor for Harry Newman; in truth that potential is well on its way to being realised. But in what should be a source of huge excitement for Rhinos fans, he’s not the finished article yet. There is more to come from Harry, I think, and he’s already one of the best three-quarters in the game.

If Harry still has unrealised potential, then Richie Myler needs an appropriate adjective too. You can have “versatile” and “veteran” if you want, I prefer “indispensable”, as Richie has become just that for Leeds. He has all the experience in the world, can play and excel in four positions and will be key to any success the Rhinos enjoy in 2022.

3. Will this be Warrington’s year?

Well, the signs are good for Warrington Wolves. This is a well-resourced, well-run organisation. They have a roster full of international standard players who are now under the tutelage of one of the most experienced and intelligent coaches out there.

Their signings have been astute, headlined in my opinion by the recruitment of Oliver Holmes from the Tigers. His announcement may not have created the same waves as some of the higher-profile names to cross the threshold at the entrance to the Halliwell Jones stadium, but I guarantee Warrington fans that he will prove to be a valuable and integral part of their progression this season.

But make no mistake, all the signings and kit reveals and championing of non-fungible tokens are background noise – the real coup for the wolves and for their engaging and hard-working CEO Karl Fitzpatrick was in persuading Daryl Powell to head up this new-look Warrington side.

I think there is a real meeting of minds here as well as a confluence of ambition, competence and resource. Big things are expected by all at the Wolves, and when your starting line-up includes the England half-back pairing of Gareth Widdop and George Williams, a back line full of guile (Stefan Ratchford), power (Peter Mata’utia) and speed (Matty Ashton) and a pack spearheaded by the evergreen and ever-excellent Daryl Clark at hooker then you would forgive their fan base for asserting that 2022 will be, indeed, the year of the wolf.

4. Are Toulouse Olympique here to stay?

I think it will be really tough for them, as is invariably the case for a newly promoted team and whilst I admire Sylvain Houles’ commitment to the group of men that got Olympique to Super League, they are now entering unknown territory as they face opposition of a higher calibre, week after week. You feel they will need to make additions to their squad as players – think fringe NRL – become available, possibly as early as April.

Toulouse will also need to hit the ground running. Their main advantages centre on geography and unfamiliarity, and whilst the former is fixed, the latter will become clearer for opposition teams as the weekly rounds go by.

Houles’ men need to make the most of these factors, which could potentially equate to three or four home wins in my opinion. The issue they have is that I think they will need more than eight competition points to stay a Super League side for 2023. Toulouse will need to get wins on the board early, and learn and evolve as the season unfolds.

For now, though, let’s celebrate a genuine breath of fresh air in Super League as Toulouse, with their attack first, worry later philosophy, put their best foot forward in their maiden season in the top tier of our sport. The only potential fly in the ointment is the alleged reluctance of a small number of key players to comply with the vaccination requirements for overseas travel – pretty important if you’re based in south-west France.

I really hope this is resolved before the start of the season, and the Sky Sports cameras hone in on a full-strength team in their maiden Super League game against the Huddersfield Giants on Saturday, 12 February.

5. Who will be the premier side in Hull?

Now, that is a question isn’t it? Hull FC may be traditionally the bigger club in the Super League era, and they have recruited well once again ahead of the new season. There are some key names to mention in dispatches here; Darnell McIntosh is a really good signing and I think he will be a real asset for the Black and Whites, and Luke Gale could well be a huge catalyst on the field in tandem with Josh Reynolds and Jake Connor occupying the full-back berth.

But matches are not won on paper. Hull FC will need to click, to come together as one cogent unit, and do it quickly. Adam Pearson is a charismatic and charming chairman, but patience is not one of his virtues – a stuttering start could see head coach Brett Hodgson feeling the heat.

Meanwhile, all is rosy in East Hull. The Robins puffed out their chests in 2021 and strutted all the way to the Super League semi-finals under the wily guidance of Tony Smith. The momentum in the city is truly theirs.

I also happen to think Hull Kingston Rovers have made the signing of the off-season in bringing in Lachlan Coote from St Helens, which is saying something given the amount and quality of player movement – influx and internal – since the lights went down at Old Trafford in October.

Coote is everything that Hull KR need; hugely competent, massively experienced and one of the better communicators in the league. He elevated St Helens when he arrived, I think he will elevate the Robins in 2022, and given that 2021 ended just one game from a Grand Final appearance there are compelling reasons to think that it is KR who are entering a period of dominance in the city of Hull.

Sky Sports will again be broadcasting extensive live coverage of the Betfred Super League in 2022, including 25 games between February and April, Magic Weekend and the Grand Final. Watch reigning champions St Helens and Catalans Dragons face off in a rematch of last year’s Grand Final in the season opener on Thursday, February 10.