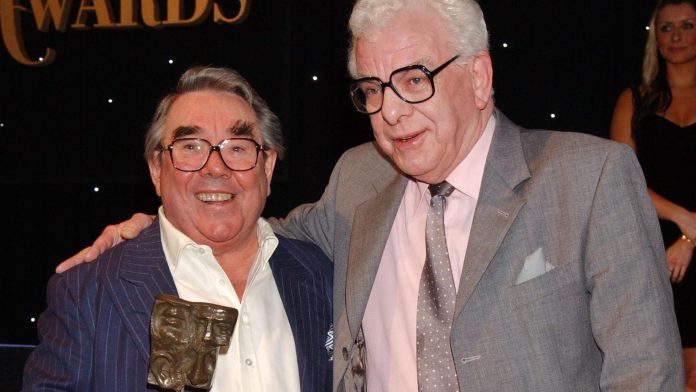 Tributes are being paid to British comedy great Barry Cryer following his death at the age of 86.

Born in Leeds in 1935, he started out as a variety performer before going on to write for and with some of the biggest names in British comedy, including Ronnie Barker, Ronnie Corbett, Sir Billy Connelly and Tommy Cooper.

He received an OBE in 2001 and in 2018 was given a lifetime achievement award for his comedy career by the British Music Hall Society.

RIP #BarryCryer. Here we are only a few weeks ago. Baz was just the loveliest guy: funny & generous. He’d worked with everybody & everybody he worked with liked him. I shall miss his happy company so much – & his regular phone calls: he gave you a gem of a joke with each one. pic.twitter.com/O8AgZyMYYt

Cryer’s family said the star died in hospital in Harrow, “peacefully, in good spirits and with his family around him”, on Tuesday afternoon.

“Dad was a talented comedy writer and comedian in a particularly golden vintage,” they said in a statement paying tribute.

“Incidentally he never really liked the terms ‘comedy writer’ or ‘comedian’, instead preferring hack and entertainer, and always thought the term ‘national treasure’ meant he’d just been dug up. He was, in his words, arrogant in his humility.

“He had a gift for friendship (as anyone who still has a landline will testify) and a genius for putting people at their ease. Oh yes, and he made many people laugh. A lot. Over many years.”

During a seven-decade career, Cryer appeared on stage, screen and radio and penned jokes for countless household names.

He was known for his long-running partnership with the late Sir David Frost, with their collaborations including The Frost Report on the BBC, and was also a panellist on Radio 4’s I’m Sorry I Haven’t A Clue for more than four decades.

He was also a much-loved family man, known to those who knew him as Baz. One of his sons, actor and writer Bob Cryer, shared the family’s statement on Twitter with the caption “#celebratebaz”.

“Baz was, firstly, a loving husband to Terry for nearly 60 years and a gentle father to Tony, David, Jack, Bob,” their statement said. “He was a friend to their partners Jayne, Matt, Garry and Suzannah.

“As a grandfather, Ruby, Tom, Evan, Archie, Hope, Martha and Connie all loved him and more recently, Ruby’s daughter, Isobel, had the good fortune to spend time with him as a great-grandfather.”

Stephen Fry, Gyles Brandreth and David Baddiel are among the many stars and fans also commemorating Cryer.

Fry described the comedy legend as a “glorious, gorgeous, hilarious and gifted writer and performer who straddled all the comic traditions” and was “universally beloved”, while Doctor Who and Sherlock writer Mark Gatiss called the star “the real deal”.

Gatiss continued: “An incredibly funny man who worked with – and wrote for – the giants of comedy,” he wrote on Twitter. “Yet he remained forever curious and delighted by whatever was fresh and original. Kind, encouraging, generous and a one off. Goodbye, Cheeky.”

Such sad news, one of the absolute greats of British comedy, Barry Cryer, is no more. A glorious, gorgeous, hilarious and gifted writer and performer who straddled all the comic traditions. Universally beloved … farewell, Baz.

Heartbreaking news about Barry Cryer.He was an utter genius, endlessly intrigued by and supportive of everyone who worked in comedy.He made us all feel special.There’s a Baz-shaped hole in the world now that nobody will be able to fill. #ripbarrycryer

Writer Neil Gaiman tweeted to say he had worked with Cryer just once, but “being in the room and watching him act and tell jokes was an utter joy”.

Comedian Ross Noble described Cryer as “a legend of his generation and more engaged with the many new generations of writers and comics who followed him than anyone else in the business”. He added: “Spending time with him was always a great joy. Such a funny and nice man.”

That’s really very sad news about Barry Cryer. I adored him on I’m Sorry I Haven’t A Clue. A very, very funny man.

Dame Esther Rantzen described Cryer as an “encyclopaedia of humour”.

The TV presenter, who first worked with the comedy star in the ’60s and also on That’s Life for some time, said: “In a way Barry was a genius, but so unassuming that he would be astonished, I think, to be called a genius – but he was.

“His jokes were brilliantly crafted and a constant joy. He would ring his friends up with his latest parrot jokes or with some reflection on what was happening. He was so generous with his wit.”

Word of the day is ‘boffola’: an uproariously funny joke, or a full-on hearty laugh.

I’m not sure the word ‘boffolist’ exists yet for one who delivers boffolas every time. When it does, it belongs to Barry Cryer.

I’m so proud to have known Barry Cryer. He was a brilliant man and a bringer of huge joy who never stopped being delighted by comedy. What an amazing life. https://t.co/FiY9XO7Hy0

In a statement, Davie said: “He was an incredible comedian and writer. If you heard or saw a great sketch there was always a good chance Barry was behind it. He worked with every major showbiz legend because everyone wanted to work with him.

“Barry will be hugely missed by his many friends at the BBC and the wider public.”

‘We’ll all be doing our best to maintain that legacy’

Cryer’s family said his funeral would take place in the coming weeks and would be followed later by a “more inclusive” memorial service.

They also thanked doctors, nurses and consultants who cared for their father, mentioning the names of people from the Macmillan Cancer Support charity. “It’ll be of no surprise to those that knew and worked with him that he was telling an Archbishop of Canterbury joke to a nurse not long before he died.

“That was one of his gifts, making strangers feel welcome. Making them laugh.”

They also asked for messages, photos or videos to be submitted to a book of condolence, with details to be announced on Twitter.

“He leaves behind him a life of fun, joy, love and silliness and we’ll all be doing our best to maintain that legacy,” they said.

“He regularly told fantastic stories and anecdotes about others – the many brilliant and fascinating people he’d worked with and knew – but as he was loved and admired by many, why don’t we start telling some stories about Baz and his brilliant and mischievous life and career?

“And to end, as Dad would say: ‘Same time tomorrow?”