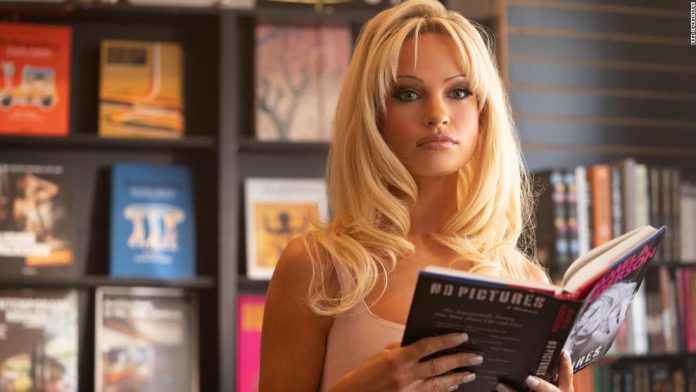 To get the obvious out of the way, Lily James (especially) and Sebastian Stan disappear into the roles of Pamela Anderson and Tommy Lee, whose whirlwind romance, week-later marriage and tumultuous relationship were in essence defined by the leak of a sexually explicit tape the pair had shot of themselves.
The couple was media catnip then and should be again, especially with attention-grabbing flourishes like a naked Tommy engaging in a conversation with the most famous part of himself — assisted by special effects — when he decides to give up the bachelor life and marry Pam.
That fantastical sequence captures the project’s whimsical and slightly uneven tone (“I, Tonya’s” Craig Gillespie directed the first three episodes), with the story set in motion by Rogen’s Rand Gauthier, a cash-strapped carpenter doing work on Lee’s palatial house.
When Lee fires him and stiffs him on payment, Gauthier decides to seek compensation and a measure of revenge by pilfering items from the property. Among them he finds the videotape, capitalizing upon his convenient ties to the porn industry through an unsavory producer (Nick Offerman) to try to wring every last buck out of its exposure. (In a particularly amusing moment, Gauthier rails against a guy selling bootleg copies in the Tower Records parking lot, as if there’s no honor among literal thieves.)
For Tommy, it’s not that big a deal, and he emerges here as both a jerk and caricature of a crazed rock star — brandishing guns, wearing tiny bikini underwear and indulging every whim without much impulse control. That includes following Pam to Cancun, uninvited, a day after meeting her.
One challenge, in fact, is that Pam represents the only sympathetic character, yearning to be more than just a human-sized Barbie doll, citing Jane Fonda as a role model. The series’ most pointed observations involve the casual misogyny directed at her, from the “Baywatch” producers excising her monologue — preferring that she simply run silently along the beach — to her awkward appearance on Jay Leno’s “The Tonight Show.”
She’s the true victim of this invasion of privacy, in a way symbolic of the casual misogyny in the ’90s that Tommy can’t even begin to comprehend.
And yet, after telling her friends that she’s “done with bad boys” (despite the one shown in a flashback to her past), she instantly falls for him, with all the baggage that entails. A lot of things here might be fake, but James’ performance feels real, in a manner that helps ground the whole exercise.
The series also has its fun revisiting the evolution of porn, when tapes were all the rage and the notion of dialing it up on a box-shaped computer provokes quizzical stares. When a shady financial backer (played by Andrew Dice Clay) tells Gauthier and his partner, “Nobody is ever getting rich off a celebrity sex tape,” at that point there’s little evidence to prove him wrong.
Based on a 2014 Rolling Stone article, “Pam & Tommy” can’t escape the sense that it’s stretching to get through eight chapters, giving Gauthier’s arc and the caper aspect more weight than they can readily carry.
On balance, though, the series is still well worth watching, and not just for the parts designed to get all the attention — namely, the ones that would warrant delivering it in a plain brown wrapper.
“Pam & Tommy” premieres Feb. 2 on Hulu.

A global show with many micro-moments: IMEX in Frankfurt returns 31...