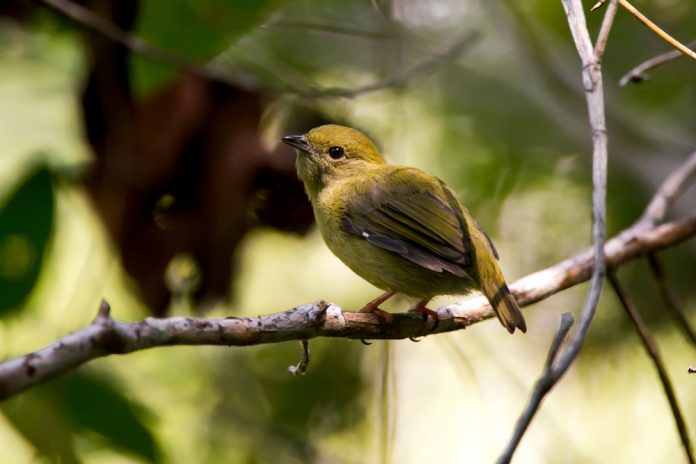 After spending weeks at a time deep in the Amazon rainforest, ecologist Vitek Jirinec and his colleagues began to suspect that something was wrong with local bird populations. This suspicion arose from decades-long data collection that has provided researchers with useful insights on the specific suite of birds in a remote spot north of Manaus, Brazil. The area remains relatively free from development and other threats associated with human presence.

Jirinec slept in a hammock under a metal-roofed shack at his research station, and some days he and his team watched thousands of army ants sweep through mist netting. The station features a setup that resembles volleyball nets in order to capture birds, though the mesh is fine enough to avoid injuring them.

The scientists knew rare species like the wing-banded antbird were disappearing from more fragmented forest areas, but as the years went on they observed fewer and fewer of these animals — even in this relatively pristine section of contiguous forest.

“Some species are now much less common than they were back in the day,” says Jirinec, who is affiliated with the Integral Ecology Research Center, a nonprofit research organization based in California. Analysis confirmed these suspicions, and follow-up work also showed that many birds were experiencing physical changes that could affect population trends — they were shrinking.

In a 2020 Ecology Letters study, the researchers reported that rarer birds are indeed decreasing in numbers. This disappearance has transpired more slowly among such species in the contiguous forest rather than those found in fragmented forest areas.

Birds that specialize in eating insects on or near the forest floor seem to exhibit the most dramatic reductions, Jirinec and his colleagues noted, a possible result of reduced food availability — other species with less considerable declines could be outcompeting these birds.

They couldn’t precisely determine why species might be declining, though they suspected climate change might play a role by shifting the conditions in habitats that ground and near-ground birds are typically adapted to.

To better understand these possible shifts, the researchers began to look at non-lethal impacts that could still impact survey data. “When someone is not doing well, they tend to lose weight — the same thing could be happening with birds,” Jirinec says.

In a Science Advances study published last fall, the researchers analyzed survey data that was recorded between 1979 and 2019 from 77 bird species to see if they could find any trends both in rarer birds, such as the wing-banded antbird, and in more common species like the white-throated manakin.

They encountered a concerning pattern: Nearly all the examined species had decreased in mass. Over the 40-year period, birds’ measures dropped by 3.8 percent on average. The species with the worst impacts decreased by roughly twice that, including the riverbank warbler, dusky-throated Antshrike, and the white-necked thrush. Each decade, the hardest-hit birds are measuring about 2 percent lighter than their 1980 mass, Jirinec says.

Over the course of the data collection, the region’s average temperatures rose significantly. The wet season temperature increased by about 1 degree Celsius (1.8 degrees Fahrenheit) while the dry season temperature increased by about 1.65 degrees Celsius (2.97 degrees Fahrenheit). Since 1966, the wet season has also gotten 13 percent wetter, while the dry season has grown 15 percent dryer.

While scientists aren’t completely sure why these birds’ masses are shrinking, the phenomenon could be explained by Bergmann’s Rule, a theory that correlates the average body size of warm-blooded mammals with regional temperature. The principle explains why larger animals are often found in higher latitudes, while those near the equator are often smaller. Bigger creatures need mass to conserve heat, while smaller animals are better at losing heat and therefore more successful in hot climates. So these birds could be ditching mass in response to elevated temperatures.

Meanwhile, many species’ wing lengths seem to have increased. Climate change might also explain this transformation: Scientists speculate that longer wings translate to less exertion and water loss, which could be important in hotter climates. Species located higher in the tree canopy, where it tends to be hotter, also saw the most change in shape, on average. “The birds that are exposed to the highest temperatures are changing the most,” Jirinec says.

These Amazon findings align with 40-year data from Chicago on more than 70,000 birds from 52 species who died after striking buildings. Researchers from the Field Museum and the University of Michigan showed that the body size of all of these birds shrank on average, while many individuals’ wing length increased. They also thought climate change could have played a role.

But Amazon-specific research is particularly important because it offers a rare look at the possible effects of temperature shifts in rich ecosystems. “We don’t have a lot of windows into what’s going on in the Amazon,” Jirinec says.