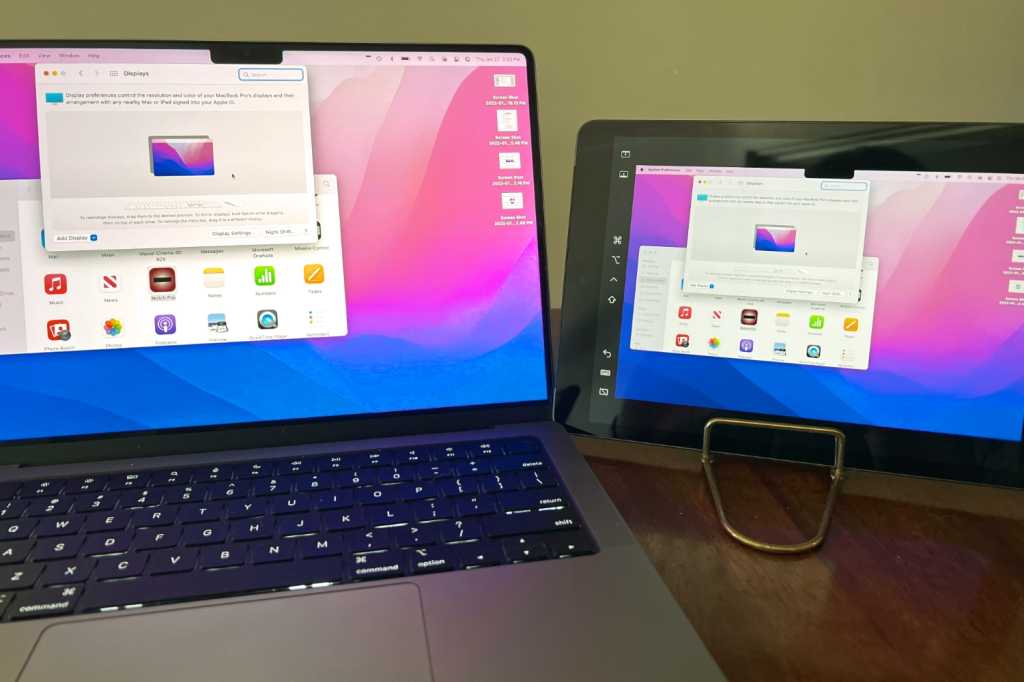 The macOS 12.3 and iPadOS 15.4 betas were released to developers on Thursday, and there was a surprise: Apple finally added Universal Control, the much-anticipated feature that was revealed at WWDC21. Late last year Apple announced that the release of Universal Control would be delayed to this spring, so we didn’t expect to see any trace of it until at least March.

For the uninitiated, Universal Control allows you to use an iPad as an external display for a Mac. During the demo in the WWDC keynote, Apple VP Craig Federighi merely placed the iPad next to his Mac, and it worked. No cables to connect, no restarting, no need to click anything or say “please,” it just connected and worked like magic.

And from my initial experience, after you set it all up, it does work like magic, even in this first beta form.

Connecting the iPad and Mac

Before you can get to the magic, there’s a little bit of setup involved on the Mac. Universal Control is turned on by default on the Mac and the iPad, but you’ll need to head over to the Display pane in System Preferences and select Add Display to select your iPad. You don’t have to do anything else on the iPad, but Bluetooth, Wi-Fi, and Handoff need to all be turned on. The whole operation is extremely easy—you don’t really need to pay attention to the iPad at all.

Once it’s all set up, you simply bring the iPad close to the Mac; Apple says they need to be at least 30 feet of each other, essentially Bluetooth range. Then you move your Mac’s cursor past the edge of the display and a bar appears on the iPads’ screen edge to let you know that magic is about to happen. Move the cursor a little more, and voilà! You’re using the iPad via your Mac’s mouse or trackpad.

Once you perform the initial interaction between the Mac and iPad, you can move between the two effortlessly—the sidebar that appeared at the initial connection doesn’t even appear anymore. And that’s it, you’re good to go. I didn’t run into any problems whatsoever in the first couple of hours I used Universal Control.

If you’re using the iPad as an external Mac display and you want to use your iPad as you usually do, you can just switch back to the iPad’s home screen. Then, when you want to reconnect to the Mac, just tap the Universal Control icon in the iPad’s Dock—your iPad magically reconnects to your Mac, no muss, no fuss.

During my testing, I was able to easily reconnect if I moved the iPad beyond 30 feet of the MacBook Pro, or if I put the iPad to sleep by pressing the power button quickly. However, when I turned off the iPad and turned it back on, I couldn’t connect by simply placing the iPad next to the MacBook Pro. I had to go into the Display preference pane and add the iPad as a display. It was there where I found the setting I had missed and need to turn on: “Automatically reconnect to any nearby Mac or iPad.”

When you’re using the iPad via Universal Control, a dot represents the cursor you are controlling with the Mac’s trackpad. The shade of the dot changes color depending on what it is moving over—the dot becomes white if it moves over dark colors or icons, and it becomes darker when it’s over lighter colors. You can use the iPad just as you regularly would with the touch interface. It’s basically the same experience as if you were using a Magic Keyboard with an iPad Pro.

I was able to drag a file from the iPad’s Photos app to the Mac Desktop. However, when I dragged an image from the Mac to the iPad’s Home screen, the icon disappeared and I couldn’t find the file anywhere. Here’s why: what you have to do is drag the file from the Mac to an open app on the iPad—so for an image, you must drag it to Photos, Files, or any other app you want. It took a few tries to realize what I was doing wrong, so hopefully, Apple will update Universal Control so that an alert pops up if you’re dragging a file to the iPad’s Home screen.

iPad as an external display

Configuring the iPad as an additional Mac display is also done through the Displays preference. You can choose to either mirror your Mac or expand your desktop.

Apple provides a touch UI bar on the side of the iPad’s screen that you can use if you want to perform touch input. For example, with the iPad set up to mirror the Mac, I launched Pages, and then I was able to type in the document using the touch keyboard provided by the sidebar. It has buttons for Shift, Control, Option, and Command, and buttons to make the menu bar and Dock hide or appear. There’s also a button to disconnect the iPad from the Mac.

In all, my initial experience with Universal Control was great. During my testing over a couple of hours, the connection never dropped unexpectedly, there wasn’t any lag, and I didn’t run into any odd behavior. This is a beta, so Apple is still working on it, but so far, so good.