Home Culture Kristen Bell dials ‘S’ for ‘silly’ in ‘The Woman in the House... 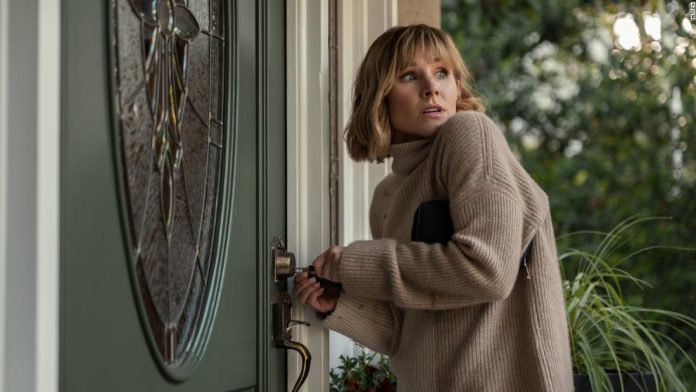 Other than making headline writers absolutely bonkers, the title is obviously intended to evoke thoughts of the rightfully derided movie “The Woman in the Window” (itself a “Rear Window” homage), and any number of other similar thrillers, a la “The Girl on the Train.”
The basic conceit is that Bell’s Anna, still dealing with the tragic loss of her child and demise of her marriage, finds consolation gulping down wine and staring out her suburban window, until the arrival of an attractive neighbor (“Da VInci’s Demons” star Tom Riley) with a young daughter begins to shake her out of her stupor.
Anna’s clumsy flirtation with the guy becomes even more awkward when she catches sight of his model-pretty, flight-attendant girlfriend (Shelley Hennig), until Anna witnesses what sure looks like a brutal murder — unless, of course, she somehow drunkenly hallucinated the whole thing.
Bell thus joins a long line of protagonists who can’t entirely trust their own senses, while her attempts to convince the police, friends and her ex-husband (Michael Ealy) that something happened mostly fall on deaf ears. Instead, her alarms provoke more concern about whether she might be losing her grip on reality.
Produced by Bell and Will Ferrell along with series creators Rachel Ramras, Hugh Davidson and Larry Dorf (whose credits include the cheeky Adult Swim animated spoof “Mike Tyson Mysteries”), the series does a reasonably good job teasing out the mystery and suspects but begins to run on fumes before the eight episodes are over.
That’s an inevitable challenge when trying to simultaneously spoof the genre and tease out an actual mystery over this episodic format, but it requires a more delicate touch than the show consistently exhibits.
Thanks to Bell, “The Woman in the House” (etc., etc.) is a bit more enjoyable than just sipping wine and idly surveilling one’s neighbors. Just not enough to generate much enthusiasm about the prospect of boarding this train again.
“The Woman in the House Across the Street from the Girl in the Window” premieres Jan. 28 on Netflix.

LGBTQ+ on screen: We’ve come a long way but there’s more work to do

‘It’s like waiting for Christmas’: Backstage with… Steve Carell as Gru and the Minions return

From 2014: Margaret Keane and the story behind “Big Eyes”