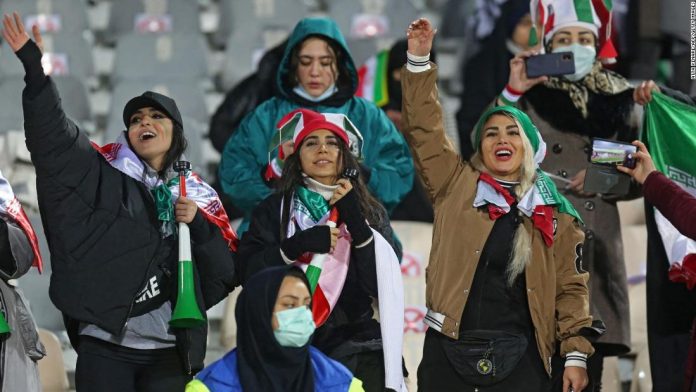 According to the national team’s website, female supporters entered through a special entrance via a car park, controlled by policewomen wearing black chador robes and red badges on their arms. They were separated from men in the stadium.
Since October 2019, Covid-19 restrictions in the country have prohibited all fans from entering stadiums to watch the national team — that was until Thursday.
According to the country’s news agency ISNA, 2,000 out of 10,000 tickets sold for the the 2022 World Cup qualifying match between Iran and Iraq at the Azadi Stadium in Tehran were given to women.
It’s unclear, though, exactly how many women were ultimately present in the stadium on Thursday.
Female supporters that were in attendance were pictured with the national colours painted on their cheeks, with many carrying and waving Iranian flags.
“I am very happy. This is the first time I have attended a match at the Azadi Stadium,” a 26-year-old civil engineer who gave her name only as Mahya told AFP.
Mahya added that there was “nothing strange or complicated” about a woman going to the stadium.
“It should have happened earlier but I am very happy and I hope that this will continue,” she said.
Another female supporter, 24-year-old Golnaz Bahari, told AFP: “I wished to have my husband beside me but they said men and women are segregated.”
“It will be a lot better if families can come together,” added Bahari.
On the pitch, Iran became the first Asian nation to book its place in Qatar with a 1-0 victory over Iraq.
Porto striker Medhi Taremi scored the decisive goal after 48 minutes to send the country through to its sixth World Cup finals, and third in a row.
Iran next face the United Arab Emirates in a 2022 World Cup qualifying match also taking place at the Azadi Stadium on Tuesday, February 1.
It’s unclear, though, whether female spectators will be permitted to attend.
Iran’s ban on women attending sports stadiums is not written into law but was put in place shortly after the 1979 Islamic Revolution.
But following pressure from human rights group and the sport’s world governing body FIFA, Iran agreed to permit women to enter the stadium in September 2019.
Visit CNN.com/sport for more news, features, and videos
A month later, women were lawfully able to attend the 2022 World Cup qualifying match between Iran and Cambodia at the Azadi Stadium.
The initial allocation of 3,500 tickets for female fans was quickly sold out — reportedly in under an hour — before an additional 1,100 were released for the game.
Those inside the stadium were treated to a goal fest with Iran winning 14-0.