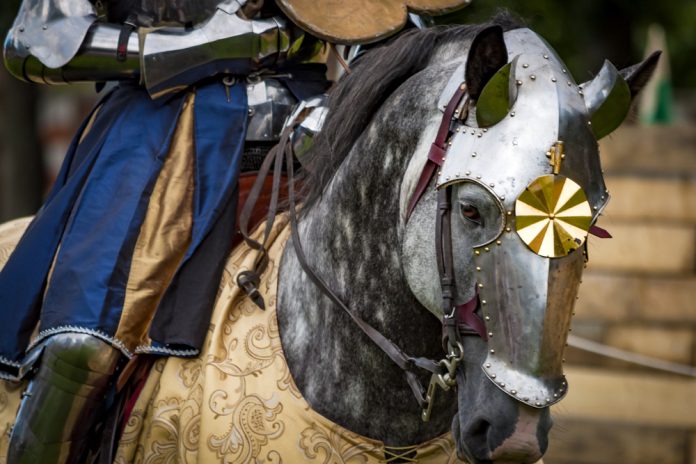 Thundering warhorses beating down a plain would have been a fearful sight for opposing forces in the Medieval ages. But new research shows that to modern eyes, many of these warhorses would have been less imposing than modern humans might expect — they were all quite small compared to the largest horses around today.

“Almost all medieval horses are technically ponies based on a modern understanding,” says Alan Outram, an archaeologist at the University of Exeter in the U.K.

Outram and others had noted that medieval horse armor in museum exhibits often didn’t even fit the large models they were placed on. The bones also seemed small, and surviving horseshoes were small as well. Furthermore, medieval art sometimes depicts the legs of mounted warriors dangling quite low on their mounts.

On the other hand, descriptions in literary sources often describe warhorses, known as destriers, as formidable animals.

All of this has led to a fair amount of debate over the size of medieval warhorses among scholars, with many pointing out that smaller ponies wouldn’t have been able to support the weight of a knight fully decked out in armor.

Many royals kept detailed records of their horses that are still around today. These records include everything from the names and colors of the steeds to their cost and how much they ate. Unfortunately, none of these documents recorded the size of these horses, Outram says.

In a study published recently in the Journal of Osteoarchaeology, Outram and his colleagues examined the data derived from the archaeological excavations of about 2,000 medieval horses from 171 sites to see if they could draw some conclusions about horse size. These remains date roughly from 800 A.D. to the 1500s, including a few horses from the Roman and post-medieval era. They then compared these to modern horse sizes.

Horses are measured using a unit called “hands,” which equate to about 4 inches each. Horses are measured from the ground to their withers, or shoulders. For context, the large horses on today’s police forces are quite tall at about 16 hands. Descendants of medieval destriers, horse breeds such as the Friesian and the Shire, stand about 17 to 18 hands high (or 68 to 72inches). Modern sporting horses used in equestrian events fit somewhere between these two sizes.

But Outram and his colleagues found little in the archaeological evidence that even approached modern war horse breeds. “There wasn’t anything that was in the size category that people were thinking of,” he says.

The very largest that they found in the examined remains were between 12 and 14 hands high (48-56 inches). Technically speaking, anything below 14.2 hands today is considered a pony rather than a horse.

“It’s quite clear to us that there were pony-sized animals that must have been used in warfare,” Outram says, though he notes that he’s not saying medieval warhorses were the size of the Shetland breeds people think of when they hear the word pony. Those miniature breeds only measure 7 to 8 hands (28 to32 inches).

Fit for the job?

Some have trouble believing medieval horses were that small because of the enormous weight they carried. A full set of armor would weigh about 45 to 55 pounds, plus the person wearing it.

But Outram says that even today, a horse of about 14 hands (56 inches) is fairly rugged and can definitely manage these kinds of loads.

However, it would seem that size wasn’t the only aspect considered when it came to destriers. Horses were used widely for several different things. Even in war, different horses were used for chasing down fleeing enemies as well as frontal attacks. Warhorses went through intense training. They had to be able to maneuver and face down potential violence. “It wasn’t about pure size,” Outram says. “You don’t want a horse that scares and runs off very easily.”

A potentially better modern comparison are the horses used in polo; they  need to be able to accelerate quickly and make sudden turns. These are often smaller than police and war horse descendent breeds, standing around 15 hands high (60 inches).

After the medieval period when the agricultural revolution had taken off in England, horses were bread for other purposes. “Breeding of all animals really accelerated and became a lot more sophisticated,” Outram says. Farmers shifted from using oxen to plow fields to larger horses. Genetic work has shown the diversity of male lineages dropped off significantly as fewer prime studs were used intensively to breed for different characteristics. Some breeding focused on size in response to competitions that were held awarding large horses. This resulted in a huge jump in size starting in the 1650s, quickly increasing to the size we see today.