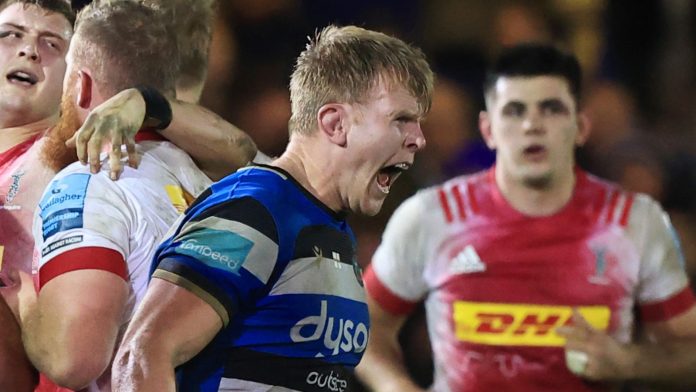 Ben Spencer’s late penalty clinched a memorable win for bottom-club Bath over defending Premiership champions Harlequins, who had led at half-time thanks to tries from Dino Lamb and Cadan Murley

Although Bath remain bottom of the Premiership, they followed up victory over Worcester three weeks ago by claiming their first back-to-back league wins since March last year.

But Bath, 32 points behind Quins before kick-off, stayed in the contest through two Ben Spencer penalties before Muir struck twice in 14 minutes. Spencer’s late penalty then sealed it after Quins substitute George Hammond claimed his team’s third touchdown.

Spencer added the conversion to Muir’s opener, and it was an outstanding effort by the injury-hit west country club after they conceded 64 points at home to Heineken Champions Cup opponents Leinster last Saturday.

An incredible evening here at the Rec! We did it!

Quins, without Smith’s direction and the physical presence of Dombrandt, saw hopes of a fourth successive away win in all competitions disappear.

England international No 8 Nathan Hughes made his Bath debut after joining on loan from Bristol earlier this week, while centre Max Ojomoh answered an injury SOS by featuring at fly-half and there was a first Premiership start for prop Arthur Cordwell.

Quins were captained by their former Bath hooker Jack Walker, with lock Lamb moving to blindside flanker and Tyrone Green returning at full-back.

Quins pressed from the start, but they blew two golden try-scoring opportunities inside the first four minutes after Green’s pass failed to find an unmarked Luke Wallace, then wing Nick David spilled possession as he dived towards Bath’s line following a superbly-placed Danny Care kick.

Bath were pinned inside their own 22, and when they eventually escaped, centre Cameron Redpath’s poor clearance saw Quins counter-attack, and David sent Lamb over for a try that Allan converted from the touchline.

Lamb left the action shortly afterwards with what appeared to be hamstring injury, being replaced by Archie White, then Green received a yellow card from referee Tom Foley for a deliberate knock-on.

Prop Will Collier became the second Quins player to make an injury exit, with Simon Kerrod going on, and Bath began to put some promising passages of play together, led by some sharp running from Redpath and Ojomoh.

Spencer opened Bath’s account through a 27th-minute penalty, then he added a second successful kick shortly afterwards as Quins struggled to rediscover their early authority.

But they finished a stop-start opening half by conjuring an exceptional try that was started by David’s midfield break, taken on at pace by centre Huw Jones and finished by Murley.

Allan drifted the conversion attempt wide, yet Quins took a 12-6 advantage into the interval after absorbing a considerable amount of pressure.

Bath, though, retained their composure and went ahead for the first time after 44 minutes when Ojomoh’s pass freed Muir, who applied a high-class finish, before Spencer added a touchline conversion.

It was the cue for Bath to find unquestionably their best form of a wretched season, and a dominant third-quarter display ended with Muir claiming a second touchdown for a six-point lead.

But Bath had enough in the tank to hold on and claim their best result of the season.