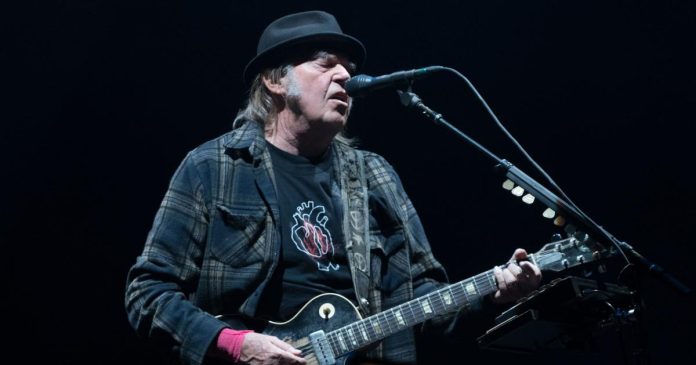 Neil Young had a strong message for Spotify on Monday: “They can have Rogan or Young. Not both.” The 76-year-old rocker apparently doesn’t want to share a platform with Joe Rogan, whose podcast, “The Joe Rogan Experience” has an exclusive deal with Spotify and has frequently spread false information about COVID-19.

Rogan has famously questioned COVID-19 vaccines on his show, and when he got COVID-19 last year, said he took ivermectin, an anti-parasite drug that’s been heavily promoted on social media despite having no proven benefit against COVID-19.

In an open letter to his management and record label posted on his website, Young, who survived polio as a child, said he wanted to remove his music from Spotify because of the “false information about vaccines being spread — potentially causing death to those who believe the disinformation being spread by them.” Polio has been eliminated in the United States due to widespread vaccination against it.

“Please act on this immediately today and keep me informed of the time schedule,” Young wrote, according to Variety, which saw the statement before it was deleted. “I want you to let Spotify know immediately today that I want all of my music off their platform.”

Young said that with an estimated 11 million listeners per episode, Rogan’s podcast “has tremendous influence,” according to BBC News, which also obtained a copy of the letter before it was removed. “Spotify has a responsibility to mitigate the spread of misinformation on its platform, though the company presently has no misinformation policy,” he wrote.

A group of dozens of doctors and health experts wrote a letter to Spotify earlier this month, calling on the platform to remove Rogan after his “highly controversial episode featuring guest Dr. Robert Malone.”

The coalition of scientists, medical professionals, professors, and science communicators who wrote the letter said Rogan has a history of spreading misinformation and has discouraged vaccination in young people, and falsely claimed that mRNA vaccines are “gene therapy.”

The three COVID-19 vaccines available in the United States are effective and safe, according to the Centers for Disease Control and Prevention. The Pfizer vaccine is available to people age 5 and older, and the Moderna and Johnson and Johnson vaccines are available to all adults 18 and older.

The scientists said many of the claims made on Rogan’s show have been discredited – and many are offensive. They say Spotify is “enabling its hosted media to damage public trust in scientific research and sow doubt in the credibility of data-driven guidance offered by medical professionals.”

“The Joe Rogan Experience” is currently Spotify’s top podcast. Rogan signed an exclusive deal with the company in 2020, with the Wall Street Journal reporting he is earning more than $100 million from Spotify.

CBS News has reached out to representatives for Young, Rogan and Spotify and is awaiting response.

Travis Barker has been rushed to hospital in Los Angeles, according to reports

‘Loot’ gives the gift of comedy with Maya Rudolph