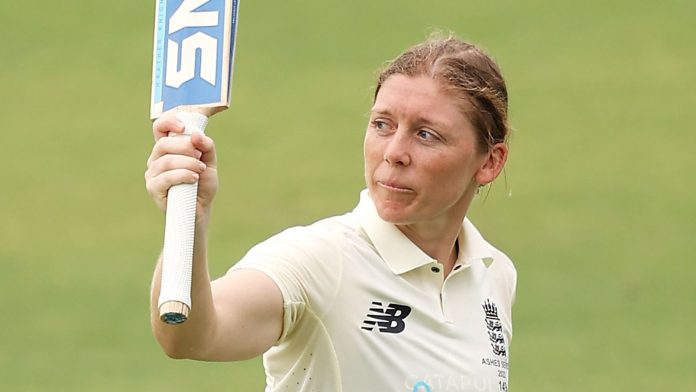 “There’s a little bit of time left in the game, so we are going to have bowl absolutely out of our skins to try and take early wickets and put the Aussies under the pump”; Heather Knight says her 168no was her “best innings” for England as tourists cling to hope of victory in Ashes Test

Heather Knight says England “live in hope” that they can still force a win in the Women’s Ashes Test despite rain curtailing day three in Canberra.

The England captain scored a career-best 168 not out to trim the first-innings deficit to 40 before Katherine Brunt claimed her sixth and seventh wickets of the match to reduce Australia to 12-2, a lead of 52, in their second innings.

However, the heavens opened just a ball after Rachael Haynes’ dismissal and no further play was possible in the day, leaving the tourists 109 overs on the fourth and final day to try and manufacture a result.

With Australia leading the multi-format series 4-2 and only the three one-day internationals, a format in which Meg Lanning’s side have dominated in recent years, to follow, England will feel victory is imperative if they are to regain the Ashes.

Given how well Brunt has bowled in the match, Knight has not given up on that just yet although she admitted that the rain has made it very difficult for her side.

“Brunty’s having a brilliant Test and the way she bowled – the aggression, the skill – hunting Australian wickets, and to pick up those two wickets felt like we could really break the game open, try and get them out for a cheap score and set up a chase so obviously a little bit frustrating,” she said.

“We are still holding out a little bit of hope, there’s a little bit of time left in the game, so we are going to have bowl absolutely out of our skins to try and take early wickets and put the Aussies under the pump. We live in hope.

“We are focused on our plan, we are going to hit them hard in the morning, a 9.30am start might give us a little bit more with a bit of dew around. If we can skittle them it will set up a nice chase for us hopefully.”

Should England manage to pull off a dramatic last-day win, it would be in no small part down to the brilliance of their skipper with the bat.

Knight came in 13 balls into the innings and was unbeaten at the end, marshalling the lower order superbly to guide her side from 120-6 up to 297 all out and within striking range of Australia’s first-innings total.

“Think it’s my best innings for England, definitely,” Knight said. “The situation we were in, in an Ashes game against probably the best team in the world, so super pleased.

“I felt quite rusty at the start, they bowled pretty well with the first new ball, but when you’ve played a lot of white-ball cricket and you have a red-ball moving it’s quite hard not to have a little flirt with it, and I did that a few times, but managed to get through that tricky period and when the spin came on I felt a lot more comfortable and found my rhythm.”

Knight was also full of praise for Sophie Ecclestone, with whom she shared a 100-run partnership for the ninth wicket.

“The way Sophie batted was unbelievable, the team really need her to stand up,” the England captain added.

“She’s got a really sound technique and really chuffed for her that she was able to put in that patient knock… to get us so close to the score. I was looking at a great situation being 70 or so behind, so to get to the deficit we did was a real effort.”

Ukraine: How basic food support becomes a lifeline for those escaping...

The Safer Access programme: Good practice in Brazil showcased at the...