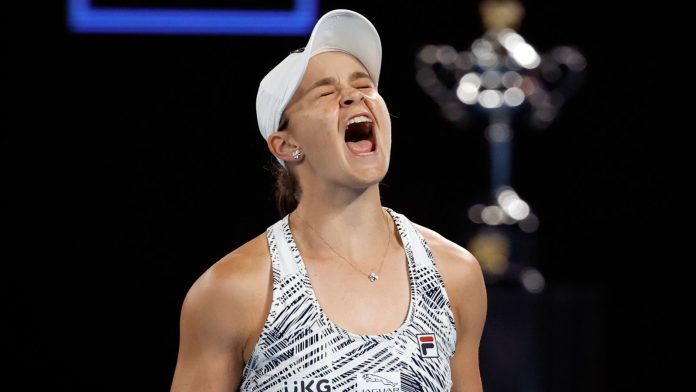 Ashleigh Barty still believes she has things to work on as she aims to refine her game; having added the Australian Open to the French Open in 2019 and Wimbledon last summer, the Queensland star now has her sights set on winning the US Open at Flushing Meadows to complete the set

What would Ashleigh Barty’s advice for the girl in the photo holding her racket and trophy be knowing her journey now? “Be patient, have fun, trust your gut every day of the week.”

Barty’s dream came finally true after she ended Australia’s 44-year wait for a home winner at the Australian Open by beating American Danielle Collins in the final on Saturday.

Jim Joyce was the coach that discovered her as a four-year-old in Queensland, mentoring and coaching Barty into becoming a tennis superstar.

But a humble Barty believes there is still work to be done alongside her current long-time coach Craig Tyzzer, who has successfully turned the former cricketer and disillusioned tennis talent to all-conquering champion.

“I feel very humble to be in such a select group. To be honest, I don’t really feel like I belong with those champions of our sport. I’m still very much learning and trying to refine my craft and try and learn every single day and get better and better,” said the 25-year-old.

“I think being able to have that balance and understand that I’m very lucky and fortunate to be able to do what I do, I get to play a sport that I love for a living, I get to compete, work hard, and I think I just see that as an opportunity. There are so many different things that I get to experience as a tennis player, and I’m very fortunate to do that.”

Having also won the French Open in 2019 and Wimbledon last summer, Barty is the first Australian since her mentor Evonne Goolagong Cawley, who fittingly presented the trophy to her on Saturday, to win more than two Grand Slam singles titles.

Should she win the US Open, she would join Serena Williams as the only active female player to have completed the career Grand Slam.

Barty would also become only the second Australian woman to achieve the feat after Margaret Court, who holds the overall record with 24 singles titles.

“I think it’s just been an incredible journey over this past 20 years of hitting a tennis ball but particularly the last five or six years in this second phase of my career.

“I think being able to surround myself with amazing people who have invested so much time and effort and love into my career, and for them to be able to support me and to be able to experience it with me is really cool.

“I think our drive and determination and passion has always been the same right from the start. I think finding what we love to do and being able to then go out and compete and try and break down some of the barriers and try and achieve new things is really exciting for us always.”

👏👏 Congratulations @ashbarty
Mate (am I Aussie now?😎) …what a run, I’m happy for you and your team!

Not a bad day for Australian tennis #AusOpen

So happy for you @ashbarty! Congratulations on winning your home slam. You deserve it 💙🏆 @AustralianOpen

For a country that dominated tennis for much of the 1950s, 60s and 70s, recent decades have seen a dearth of success.

Before Barty, Sam Stosur at the US Open in 2011 was the only Australian woman to win a Grand Slam singles title since Goolagong Cawley claimed the last of her seven trophies at Wimbledon in 1980.

Cawley’s tally of seven looks a realistic target for Barty, who has established herself as a clear world No 1 and is at home on all surfaces.

“This fortnight, seven times I got to walk out onto a beautiful court with incredible fans and try and do the best I can do, and that’s all I could ask of myself,” Barty said.

“Now to be able to have this part of my dream kind of achieved is amazing, and I think I have to really understand that that came from the processes that we put in with my team and the people that are around me, because without them, I wouldn’t be half the person that I am.”