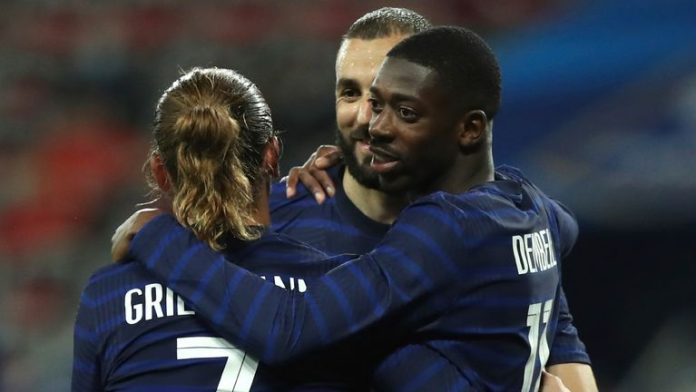 Ousmane Dembele is set to stay at Barcelona until the end of the season, despite Chelsea make an enquiry about signing the winger on Deadline Day.

The Blues reignited their interest after hearing his potential move to Paris Saint-Germain had stalled.

But the lack of time, plus financial obstacles, meant a deal was always going to be tough to conclude on Monday, and talks ultimately failed to progress.

Chelsea remain interested in signing Dembele in the summer, when he will be a free agent.

The France international’s contract expires at the end of the season, and he can now speak to clubs about signing a pre-contract ahead of a transfer in the summer.

Back in June last year, Ousmane Dembele scored for France against Wales in a friendly

Dembele was in Paris on Monday but returned to Barcelona after his potential move to PSG failed to materialise.

Barcelona officials told Dembele to find another club earlier this month after he decided not to accept a new contract that included a pay cut.

But the 24-year-old made it clear he wanted to stay at the Nou Camp and see out the remainder of his deal.

Dembele joined Barcelona for £97m plus add-ons from Borussia Dortmund in August 2017, but has struggled to justify his price tag due to a series of injuries and has started only six matches this season.

Dembele said last week he will “not give in to blackmail” after the club told him he must leave in the January transfer window.

The 24-year-old said on Instagram: “As of today, I’m going to answer honestly without giving in to any form of blackmail.

“I forbid people from speaking for me or my agent, who I have total confidence in. I’m still under contract, I’m fully committed and at the disposal of the club and my coach.

“I’ve always given everything for my team-mates and also for all the fans. That’s not going to change now. I’m not a man who cheats and even less so one who’s used to giving in to blackmail. Love can certainly be a variant of blackmail.”

Pulisic: It’s been ‘tough’ playing out of position at Chelsea

Christian Pulisic says he has found life at Chelsea tough because “I haven’t always been playing in the positions I want to play in”.

It follows similar comments from Romelu Lukaku to Sky in Italy published in December, with the striker saying he was “not happy” with his situation at Chelsea due, in part, to a change in formation by head coach Thomas Tuchel.

Pulisic has played as a winger, striker and wing-back at times under Tuchel, managing just three goals and one assist in 19 appearances in all competitions this season.

The 23-year-old, who arrived at Chelsea from Borussia Dortmund for £57.6m in January 2019, is hoping things will improve once he returns from international duty with the USA next month.

“It’s tough,” he said. “I haven’t always been playing in the positions I want to play in. But I think it’s a good quality to be versatile and be able to play in all kinds of positions and have different strengths on the pitch.

“So, yeah, I’ve learned a lot and I think I’m ready to hopefully be in a spot in the next couple of games that I’m more comfortable in.”

Follow every Chelsea game in the Premier League this season with our live blogs on the Sky Sports website and app, and watch match highlights for free shortly after full-time.

Get all this and more – including notifications sent straight to your phone – by downloading the Sky Sports Scores app and setting Chelsea as your favourite team.

The clock is ticking. Who will be on the move before the transfer window closes at 11pm on Monday January 31?