Home Sport AFCON: Who made the team of the tournament? 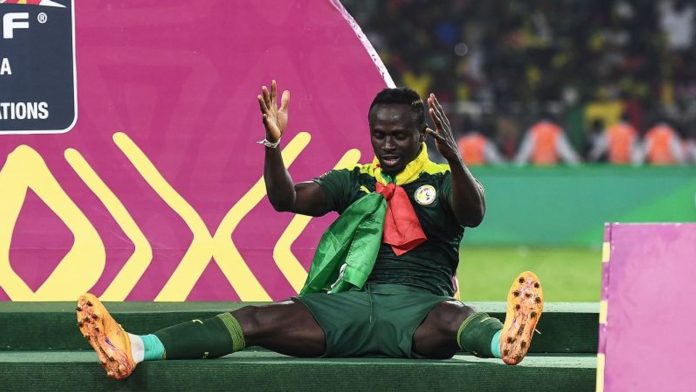 After 51 games, Senegal emerged from AFCON victorious, defeating Egypt on penalties on Sunday night to write their name into the history books.

The first-time winners are the dominant side in the WhoScored.com team of the tournament, with players from Morocco, Ivory Coast, Nigeria and Cameroon joining the two finalists in the best XI…

We take a look at some of the best moments of a thrilling tournament, featuring Sadio Mane’s delicate chip, Mo Salah’s calmness from the penalty spot and much more!

The man of the match from Sunday’s final despite Egypt’s defeat to Senegal, Mohamed Abou Gabal stepped into their XI with aplomb when required following injury to Mohamed El Shenawy. Only Sierra Leone’s Mohamed Kamara (5.7) made more saves per game than Gabal (3.8) at AFCON and he did not concede in open play during his time on the pitch to help return a WhoScored.com rating of 7.63.

The first of two Morocco representatives, Achraf Hakimi was superb for the Atlas Lions up until their quarter-final exit at the hands of losing finalists Egypt. Only three free-kicks were scored at AFCON, two of which were by Hakimi, those coming in man-of-the-match performances against Gabon and Malawi. Meanwhile, only Steeve Yago (28) made more tackles and interceptions combined than him (26) to help earn a WhoScored.com rating of 7.63.

Unsurprisingly, AFCON champions Senegal are the dominant side in the WhoScored.com team of the tournament, with captain Kalidou Koulibaly the first of four Lions of Teranga players to feature. Koulibaly routinely exhibited a statistically calculated strength of ‘passing’ as he made more accurate long balls (46) than any other outfield player at the competition to contribute towards his inclusion with a rating of 7.16.

Partnering Koulibaly at the back is compatriot Abdou Diallo, who played every minute of Senegal’s AFCON-winning campaign. Only Michael Ngadeu (362) made more accurate passes than Diallo (295) of defenders at the tournament and they helped Senegal dominate opponents and the PSG man to a WhoScored.com rating of 7.15.

Rounding off the backline is the penultimate Senegal player in the AFCON team of the tournament. Saliou Ciss did not need a second invitation to get forward from left-back, putting up averages of 1.8 key passes and 1.1 dribbles per 90, while opponents sought to limit his influence by any means necessary. Indeed, only three players were fouled more times than Ciss (18) at AFCON as he completes the defence with a WhoScored.com rating of 7.27.

With a rating of 7.97, Nicolas Pepe is the WhoScored.com AFCON player of the tournament. Given the quality of players at Patrice Beaumelle’s disposal, Cote d’Ivoire perhaps should have fared better in Cameroon, but Pepe gave a good account of himself in the competition. The winger scored as many goals at AFCON as he has for Arsenal this season (2), while he should have had more than one assist to his name with 3.2 key passes per 90 the second-best return to nail down the accolade.

The sole Nigeria player to make the team of the tournament, Moses Simon was a ball carrying machine up until the Super Eagles’ last-16 exit at the hands of Tunisia. The 26-year-old’s return of five completed dribbles per 90 was more than any other player as he successfully broke the lines to yield a WhoScored.com rating of 7.60.

Of the eight goals Morocco scored at AFCON prior to their quarter-final exit, Sofiane Boufal netted three, including key strikes in meetings with Ghana and Gabon. Only Cameroon duo Vincent Aboubakar and Karl Toko Ekambi hit the back of the net more times than Boufal at the competition as he ranked first for key passes per 90 (4.2) and third for dribbles per 90 (3.4) to feature on the left with a WhoScored.com rating of 7.51.

While he was unable to fire Cameroon to AFCON glory on home turf, Vincent Aboubakar was a goal machine at the competition. The Indomitable Lions captain scored at least three more goals (8) than any other player and ranked first for shots (31) as he played a key role in Cameroon’s third-place finish. 1.9 dribbles per 90 was the 20th best at the tournament as Aboubakar landed an impressive WhoScored.com rating of 7.94.

Joining Aboubakar on the frontline with a WhoScored.com rating of 7.54 is Senegal hero Sadio Mane. A first-half penalty miss in the final dented his overall rating, but Mane was superb for the Lions of Teranga throughout AFCON. He ranked fifth for dribbles per 90 (2.8) and had a direct hand in five of their nine goals, scoring three, to take his place in this XI.

Sadio Mane scored the winning penalty as Senegal won the Africa Cup of Nations for the first time, beating Mohamed Salah and Egypt in a shootout