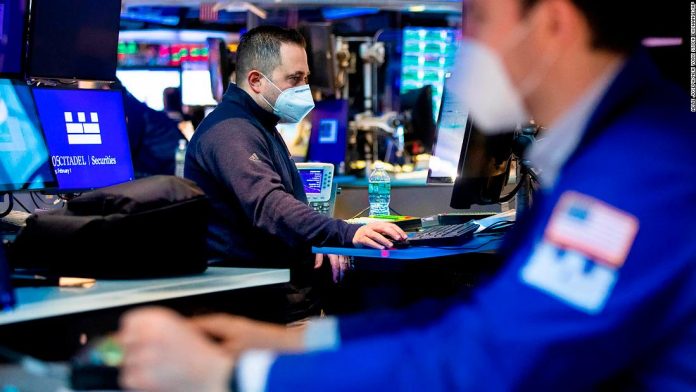 A version of this story first appeared in CNN Business’ Before the Bell newsletter. Not a subscriber? You can sign up right here.
Why? Volatility is normal. And market corrections, defined as a 10% pullback from a recent high, are healthy and common occurrences during any bull market.
The Dow and S&P 500 briefly dipped into correction late last month before bouncing back. They are now within 5% to 7% of their record highs. The Nasdaq, which is loaded with tech companies, remains in a correction. It’s about 14% below its peak.
Investors are undoubtedly on edge. The VIX (VIX), a measure of market volatility, is up more than 50% this year. And the CNN Business Fear & Greed Index, which looks at the VIX and six other gauges of market sentiment, is showing signs of Fear on Wall Street.
But a correction doesn’t necessarily mean that an even worse pullback is coming. Few analysts are predicting a long, painful bear market ahead. That’s when stocks drop more than 20% from recent highs.
“Corrections are a temporary setback for a long-term investment strategy, and about half of all corrections since 1966 have resolved themselves in less than five months,” said James Solloway, chief market strategist at SEI’s Investment Management Unit, in a report last month.
Solloway added that higher volatility does not mean there is a “high likelihood that we’re heading toward a bear market or a recession in the near future.”
“Ups and downs are a normal part of the investment cycle,” he noted.
Even a portfolio manager who runs a fund that is hedged against big stock market swings isn’t expecting a major drop anytime soon.
“This is a normal pullback,” said Dan Cupkovic, manager of the Amplify BlackSwan Growth & Treasury Core (SWAN) exchange-traded fund.
Central banks have unnerved investors by signaling in recent weeks that they may hike interest rates more aggressively than expected in order to rein in rising inflation. But Cupkovic said that he expects inflation to cool off as the year progresses.
There should be “easy money for the next few years,” he said.
Cupkovic also dismissed the argument that a bear market is overdue. That’s because there was one two years ago, when stocks plummeted in March 2020 as the Covid-19 pandemic slammed the US economy. Before that, stocks had been soaring.
“It had been such a smooth ride for investors. Stocks went straight up. There was more complacency,” he said. That’s not the case now. The VIX is more than 60% above where it was trading at the end of 2019.

Oil stocks are the new FAANGs?

One reason why stocks have stumbled out of the gate in 2022 is the underperformance of Big Tech stocks. Weak results and guidance from Facebook owner Meta Platforms tanked the FAANGs last week.
Meta’s (FB) shares have plunged more than 30% this year. So are shares of Netflix (NFLX). Amazon (AMZN) is still down about 7% despite a big stock pop Friday after reporting solid results. Microsoft (MSFT) is down about 10% and Tesla (TSLA) has fallen nearly 15%. Apple (AAPL) and Google owner Alphabet (GOOGL) have fared better due to strong earnings.
But even as tech struggles, investors are flocking to energy stocks. The Energy Select Sector SPDR (XLE) ETF is up nearly 25% this year as crude oil prices skyrocket.
Chevron (CVX) is leading the Dow with a 15% gain while Exxon Mobil (XOM) is up more than 30%. Halliburton (HAL), Schlumberger (SLB), Occidental Petroleum (OXY), Hess (HES) and APA (APA) are among the top gainers in the S&P 500.
Higher oil and gas prices are not good for consumers. But investors are pleased to see rising energy costs because it means more profits for oil giants.
Along those lines, Exxon analysts have raised their earnings forecasts for 2022 by 16% over the past three months and have raised their 2023 profit targets by 20%.
“We’re seeing this sector rotation into energy,” said Tony Minopoli, chief Investment officer at Knights of Columbus Asset Advisors. “Stocks will follow earnings.”
Monday: Earnings from Tyson Foods (TSN), Hasbro (HAS), Amgen (AMGN) and Take-Two (TTWO)
Tuesday: Earnings from BP (BP), Pfizer (PFE), Sysco (SYY), DuPont (DD), Harley-Davidson (HOG), Chipotle (CMG) and Peloton (PTON)
Wednesday: Earnings from Honda (HMC), CVS (CVS), Fox (FOXA), Yum Brands (YUM), Pepsi (PEP), Disney (DIS), Uber (UBER), MGM (MGM) and Mattel (MAT)
Thursday: US consumer prices; US weekly jobless claims; Earnings from Coca-Cola (KO), Kellogg (K), Twitter (TWTR), Zillow (Z), Expedia (EXPE), Affirm and Yelp (YELP)
Friday: UK GDP; US consumer sentiment; Earnings from Goodyear (GT) and Under Armour (UA)