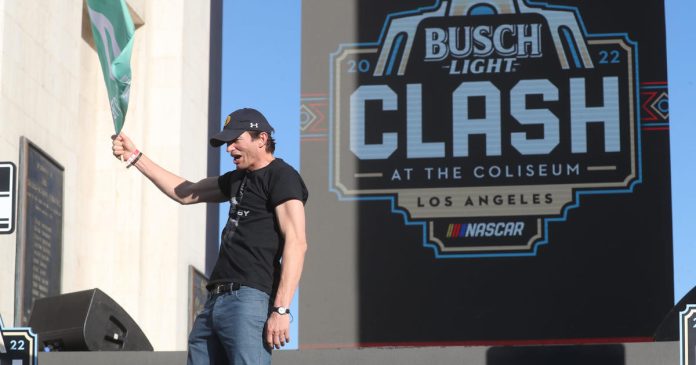 NASCAR moved the Clash to Los Angeles from Daytona International Speedway, its only home since its 1979 inception, as part of a focused effort to break from its dated traditions via innovative ideas.

“It’s wild, you know,” Jake Johnson, one of the many fans in attendance, marveled to CBS Los Angeles. “I can’t believe they put this track here!”

The Clash was a success before a single racecar drove through the USC football team’s tunnel and onto the smooth, black asphalt that covered the Trojans’ field.

Ice Cube performed a six-minute set from the Peristyle during a brief “halftime,” and Pitbull, with backup dancers outfitted in a checkered-flag theme, used the same stage for his pre-race concert.

It took two-year of planning for the event to come to life, but just a few days for crews to construct the quarter-mile racetrack for Sunday’s event.

A handful of Los Angeles sporting greats served as the grand marshals, and Jeff Gordon lit the cauldron built for the 1932 Summer Olympics before the race began. Celebrities walked a red carpet, the USC student section filled in early, and the crowd booed pole-sitter Kyle Busch like a bunch of old pros during driver introductions.

Thousands of fans flooded the stands as well, full of anticipation – and some unfamiliarity – as many of the attendees, 70% in fact, were first-timers at a NASCAR event.

Brian Face made the trip all the way from Northern California.

“This is something different,” he told CBS L.A. reporters. “I mean — the history of this stadium — it’s just a very special event.”

He said the feeling of a NASCAR event is quite unlike any other sporting event – quite literally. “Being fully-enclosed and it’s rumbling off your chest, sitting there down in the stands, it’s a good time,” he continued.

Logano won the Clash for the second time in his career. It was the fifth win for Team Penske, which has won three of the last six runnings of what had traditionally been a warmup for the Daytona 500.

Nothing learned in Los Angeles will transfer into the Feb. 21 season-opening Daytona 500, but the race was the first for NASCAR’s new car. The Next Gen was a long-planned project that was delayed a season by the pandemic.

The car is designed to cut costs to teams, even competition throughout the field and produce a better racing product. The Next Gen didn’t disappoint in its debut on the shortest track on the NASCAR schedule.

Tickets to the event ranged from $65 to $145, a cost well worth it to people who have never had the opportunity to experience an event like this.

“You gotta keep up with the times! I mean everything’s booming in L.A.,” another fan who took advantage of the chance said to CBS L.A. “That’s why we’re here!”

Face echoed that, noting that it was well worth the hours-long drive, “It’s a one-off, you don’t know if they’re gonna do it again. It’s something special and something I didn’t want to miss.”

NASCAR’s next event isn’t slated until Feb. 17 for the Duel 1 at Daytona, at Daytona International Speedway in Daytona Beach, Florida.

‘A great friend and a great bass player’: Tributes for The Pogues’ bassist Darryl Hunt who has died aged 72