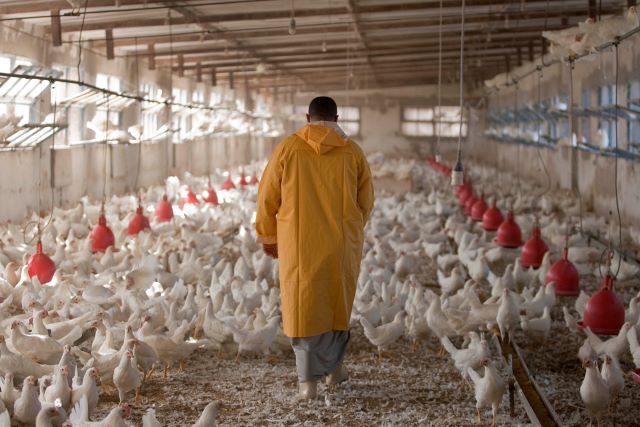 An experimental initiative to reduce hazardous dumping of poultry in Egypt aims to show farmers the business advantages of disposing safely of dead birds.

Dead poultry pose a major risk for pathogen transmission, particularly when they are not properly disposed of. In Egypt, back-of-the-envelope calculations indicate that mid-size broiler farmers throw some 29 million chickens annually into the Nile River or other waterways, which creates major health threats as water from the Nile is used for both irrigation and drinking. While existing waste management and agricultural laws prohibit dumping hazardous waste into waterbodies, including animal carcasses, they are poorly enforced.

The Food and Agriculture Organization of the United Nations (FAO)’s Africa Sustainable Livestock 2050 (ASL2050) initiative, supported by the United States Agency for International Development (USAID), has facilitated a year-long participatory process in the two governorates of Menouifa and Qalyubia – two of the country’s major poultry areas – to identify actionable options to enhance proper disposal of dead birds, and ensure compliance with the existing legislative framework. National and local government representatives as well as staff from the Egyptian Poultry Association took part in the consultative process – though the key participants were broiler farmers and field livestock officers, as it is their behaviour that, ultimately, determines compliance with the law. Do field livestock officers inform farmers of the existing legislative framework? Do they advise farmers on proper methods of dead bird disposal? Do farmers eventually properly dispose of their dead birds?

Participatory discussions to find solutions to ensure proper disposal of dead birds were anchored around two critical pieces of information: the business models of poultry farmers and the existing capacity of the public sector to deliver. This was essential to ensure the proposed solutions were implementable with existing technical and financial resources, and hence scalable nationwide.

Eventually, stakeholders concurred that poultry composting is a viable solution to avoid birds being thrown into waterbodies. Composting of dead birds is:

In the next few months, the governorates of Menoufia and Qalyubia, in cooperation with FAO’s Emergency Centre for Transboundary Animal Diseases (ECTAD), will launch an experimental initiative to promote poultry composting among broiler farmers. In particular, for the first time, field livestock officers will provide advice to farmers on poultry composting from both a technical and business perspective. The integration of these two dimensions represents a novel approach to providing livestock extension services. FAO ECTAD will monitor and evaluate the effectiveness of this approach, as well as the ultimate impact of composting on poultry business profitability. The evidence generated will be used to scale up poultry composting throughout Egypt.

Composting dead poultry nationwide has the potential to generate three major benefits for Egypt. First, the 21 000 licensed broiler farms and 11 million households currently raising poultry in Egypt stand to improve their livelihoods, as their business will become more profitable. Second, there will be a reduction in microbial threats from animals, as fewer dead birds are thrown into the Nile River and its canals. Third, composting will increase the supply of fertilizers for agriculture, with a potential reduction in market prices. This is of particular relevance as, despite the Government of Egypt significantly subsidizing fertilizer production, at the outset of any planting season there is often a shortage in their supply.

ASL2050 is also adopting a similar approach in Ethiopia, Kenya and Uganda, with the ultimate objective of learning how to structure participatory processes that result in the identification of actionable solutions that minimize microbial threats along the livestock value chain.

ASL2050: exploring a sustainable future for the African livestock sector

ASL2050 is a pilot policy initiative implemented in the context of the Global Health Security Program supported by USAID, in close cooperation with national governments. Beginning in 2015, the initiative has so far operated in Burkina Faso, Egypt, Ethiopia, Kenya, Nigeria and Uganda, and its approach is currently also being experimented with in Cambodia and Nepal .

ASL2050 investigates the opportunities and challenges that will emerge in coming decades due to fast-changing livestock systems. The goal is to identify and support livestock policies that, while tapping into opportunities, also effectively deal with the anticipated challenges for public health, society and the environment. Using a One Health approach that engages multiple disciplines and stakeholders, ASL2050 aims to create an enabling policy environment for improved detection, prevention and control of zoonotic diseases and antimicrobial resistance, facilitating the widespread adoption of biosecurity and veterinary public health practices along the livestock value chain and minimizing public health threats at the animal–human–environment interface.

‘Reframed’: a photo exhibition to see Sudan with renewed eyes

Syria: In societies shattered by conflict, civilians pay a high price for years