Home World ‘I never said anyone had sexually assaulted me in anyway,’ Chinese tennis... 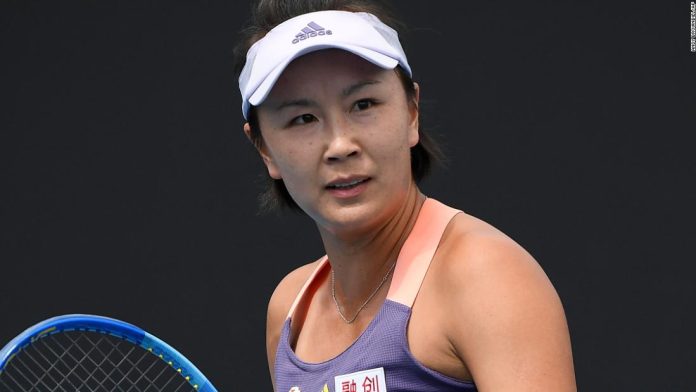 The dinner, held on the sidelines of the Beijing Games, was the first in-person meeting between IOC President Thomas Bach and Peng since the former Olympian alleged she had been pressured into sex by a retired top Chinese Communist Party official — an explosive allegation she has since appeared to retract.
Peng also told independent French sport news site L’Equipe in a sit-down interview in Beijing on Sunday that she “never disappeared” from the public eye and said so many people reached out that “it was simply impossible to answer so many messages.”
Bach and Peng were joined at dinner by former Chair of the Athletes’ Commission and IOC member Kirsty Coventry, the IOC confirmed in a statement Monday.
“During the dinner, the three spoke about their common experience as athletes at the Olympic Games, and Peng Shuai spoke of her disappointment at not being able to qualify for the Olympic Games Tokyo 2020,” said the IOC statement, which made no mention of the reason for the meeting nor the allegations.
It was not immediately clear if Peng was accompanied at the dinner by any Chinese officials. The Beijing Organizing Committee for the Olympic Games (BOCOG) “had no knowledge” of the meeting, IOC Director of Communications Mark Adams said Monday.
Bach and Peng first agreed to meet during the Beijing Olympics in a video call in November that came amid an outpouring of global concern about the whereabouts and safety of the athlete.
Peng, a three-time Olympian and Grand Slam doubles champion, earlier that month had accused retired Vice Premier Zhang Gaoli of pressuring her into having sex, according to screenshots of a swiftly deleted post from Peng’s verified account on Weibo, China’s Twitter-like social media platform.
All mention of the post — widely seen as the first allegation in China’s restricted #MeToo movement to touch the top echelons of the Chinese government — was wiped from the Chinese internet. Peng herself disappeared from the public eye for several weeks prior to a weekend of appearances, including the video call with Bach.
The IOC has come in for harsh criticism from international human rights groups for its handling of the situation, with critics accusing it of supporting Chinese government efforts to silence Peng and raising concerns about whether the athlete was at liberty to speak with IOC officials while in China — given the Communist Party’s well-documented record of quashing dissent.
The situation further amplified calls from such groups for an Olympic boycott ahead of the Games. Beijing dismissed questions circulating around Peng’s ongoing safety as “malicious speculation.”
Peng has since denied making sexual assault allegations, in December telling Singapore-based Chinese-language newspaper Lianhe Zaobao that she had “never spoken or written about anyone sexually assaulting me” and that her initial social media post describing the incident had been misunderstood.
The tennis star again denied making sexual assault allegations in her interview with L’Equipe in what was only the second interview she is known to have given to a foreign media outlet.
In the nearly hour long interview, Peng reiterated, “I never said anyone had sexually assaulted me in anyway,” and said she herself had erased the social media post from November. Zhang has not issued any response to the accusation and has remained outside of public view.
Peng, who was accompanied in the interview by Wang Kan, the Chinese Olympic Committee chief of staff, appeared to acknowledge the relationship in the interview, saying: “My lovelife problems, my personal life must not be mingled with sports and politics.”
When asked why she deleted the post on Chinese platform Weibo, she said: “Because I wanted to.”
L’Equipe says they were able to secure the rare sit-down interview after submitting a request last month to the Chinese Olympic Committee (COC) through the IOC.
Speaking at an IOC & Beijing Organizing Committee media briefing Monday, IOC Director of Communications Adams said it was not up to the governing body to pass judgment on Peng Shuai’s sexual assault accusation — which she has since recanted — or claims she has been “speaking under duress” in subsequent appearances.
“We as a sports organization are doing everything to ensure that she is happy and I don’t think it is up to us to be able to judge in one way, just as it’s not for you to judge either in one way or another, her position,” Adams continued.
The IOC reiterated its position that any calls for an inquiry into sexual assault allegations made would have to come from the tennis star herself.

Rare protests are spreading across China. Here’s what you need to know