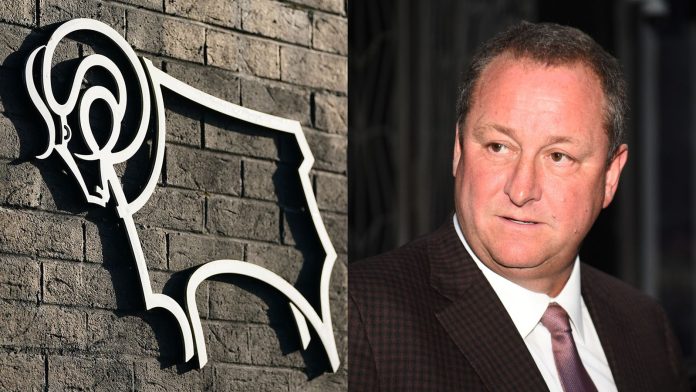 One of Mike Ashley’s senior executives has confirmed the former Newcastle owner is fully committed to buying Derby County, but he is becoming increasingly frustrated with delays obstructing a possible takeover.

In an exclusive interview with Sky Sports News, Keith Bishop, Ashley’s head of PR, says Derby’s debts and the complexity of a deal to buy the club “doesn’t frighten him”, but he admits “the clock is ticking” if a deal is to be done to avoid Derby going into liquidation.

“He is 100 per cent interested in buying the club,” said Bishop. “He wants the Derby fans to know he is very much interested.

“He sees it as a club that could do really well, obviously it’s not doing very well at the moment, but with his business acumen, he believes he could really turn it around.

“He’s still a very rich man, who has got the funds to put into the club, and he has got the business acumen to change things there.

“If I were a Derby fan I’d be very happy. And from the response we are getting, there are a lot of fans who want him to come in and take the club over.

“With where they are now, they deserve a lot better. And that’s what he can do.”

Highlights of the Sky Bet Championship match between Huddersfield and Derby

Ashley is one of three potential buyers interested in taking over at Pride Park, though the situation is extremely complex, and that is a source of frustration.

Debts of over £60m, legal claims from Middlesbrough and Wycombe worth potentially £40m, and complexities over the stadium which is not owned by the club, are all serious stumbling blocks.

“Mike is a solution-maker,” Bishop added. “He seeks out things like this, it doesn’t frighten him. He’s also liked Derby for a number of years, he knows about their past – the 70s and 80s, the Cloughie years – and he knows about the fans, who are a good set of fans.

“We’ve had a lot of emails recently from Derby fans saying they want him to take over, which has also pleased him obviously.”

Towards the end of his time in charge of Newcastle, Ashley became a figure of hate to the majority of fans in the North East. So why would he want to risk being targeted with a similar level of abuse again?

Bishop replied: “He had the club for 14 years and at the start he really enjoyed it.

“Obviously things didn’t go well towards the end, but he said at the time he would sell the club to someone who could really take it to the next level and he sold it to a country, rather than an individual.

“He’s a rich individual, but not one that could take Newcastle where it needed to be, so that’s what he did.

“And I think that’s what Derby needs right now – someone who knows football, but is also a good businessman. And he sees that.

“He’s got an idea that he can really turn it around, and that’s why he wants to get involved. There are other clubs as well, but Derby is the one he’s been looking at for a while.”

Almost two weeks ago, Derby were granted a month’s extension to prove to the EFL they have the necessary funds to see out the remainder of this season’s fixtures.

Since then, there has been no public statement of progress from Derby’s administrators, and Ashley is keen to push things along as quickly as possible.

“The clock is ticking,” warned Bishop. “If anyone bought it now, it would take almost 12 weeks to get it done, and so that takes us nearly into May [if someone were to buy the club now].

“So there are frustrations all the way round, which I can’t really go into. But he would like to get these frustrations sorted and move forward.

“He’s always hopeful. We’ve been involved in many deals over the years – some you win, some you don’t. I know he would like to do it but you can never guarantee anything.”

Why are we hearing from Mike Ashley now?

“My understanding is that there are a couple of newspaper reports over the weekend – which claimed Mike Ashley had walked away from any deal to buy Derby County – that they didn’t like. So, first and foremost, Mike Ashley wanted to put that straight.

“But there is more to it than that. The Ashley camp are frustrated by the lack of progress. They believe theirs is a very credible deal, they are prepared to take Derby County on knowing the significant problems the club has got, and yet things still aren’t moving with Derby’s administrators and the EFL.

“So they have gone public for the first time, which is rare. I’ve been pestering the Ashley camp for an interview for some time, but this is a calculated decision to do it now.

“It ramps up the pressure a little bit on Derby’s administrators and the EFL, it makes it clear to Derby supporters that Mike Ashely is serious about wanting to buy the club, and it means the work they are doing behind the scenes probably has a bit more traction now.”

‘Takeover hurdles yet to move’

“There are three interested parties who want to buy Derby County, and they are all credible, as far as I understand it, they are all coming up against the same hurdles which are significant, more significant than any barriers I have known in the times in the past when a Championship club has tried to be taken over.

“Derby have more than £60m of debt, a huge hurdle to overcome from the outset, and they also have legal claims against them from Middlesbrough and Wycombe, who are suing them for Derby’s breaching of financial rules laid out by EFL last season. Those legal claims are potentially worth £40m.

“Add to that Derby don’t own their own stadium, which is still owned by Mel Morris, that’s a separate negotiation that has to happen. You can see it’s a very complex deal to get done and those hurdles are yet to move.”