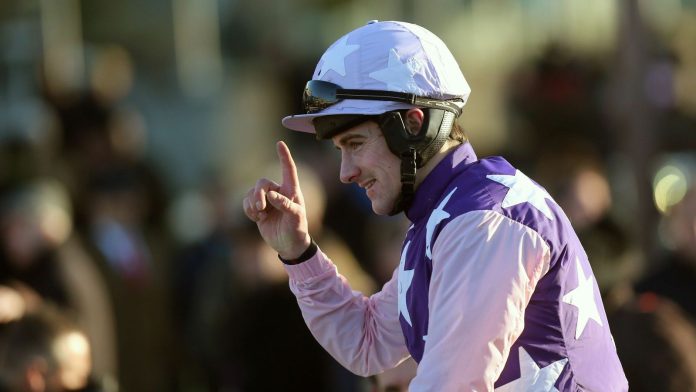 Brian Hughes does not do fanfare so expect there to be an air of awkwardness, perhaps even a touch of reluctance, to the increasingly inevitable and long overdue public crowning of him as champion jumps jockey.

It is a title Hughes also owned back in 2020 when the beginning of the coronavirus pandemic cut the season short and denied the Northern-based rider the usual pomp and ceremony of Sandown’s season finale in April.

Unlike his idol and former multiple champion AP McCoy, who also hails from Northern Ireland, Hughes’ command of the championship has largely gone under the radar, such is his understated manner.

On Monday, Hughes surpassed his previous personal best record for winners in a single season (146) and is now 67 clear of nearest rival Sam Twiston-Davies (83) and defending champion Harry Skelton (81) after a four-timer on the card at Carlisle.

Whether he welcomes it or not, that is an achievement worth celebrating and could well start a McCoy-style period of domination.

Keen still to play down his lead, Hughes told Sky Sports Racing: “The main goal was just to get the head down and be champion jockey. I didn’t ride enough winners last year. Simple.

“Last year we started on July 1 and normally May and June is quite busy in the north, which we missed, but that’s not an excuse.

“I’m in a good position at the minute but it’s not over yet because in sport anything can happen.

“I’ll keep trying and hopefully it’ll all pan out.”

Hughes’ skill and consistency mean it is rare for a meeting in the north to pass by without a full book of rides for the 36-year-old.

His record has been boosted by the phenomenal form of trainer Donald McCain, who is enjoying his best campaign since 2013/14 and has provided Hughes with over half of his victories this season (79).

“Donald’s horses are in great form and you’re nothing without the horses you’re sitting on,” Hughes said. “I’m getting on the right horses.

“The people I ride for, Donald and Nicky [Richards], a lot of them have reinvested in younger stock and there’s barely a sale that goes by where Donald doesn’t buy a decent one, if not two.

“I’ve reaped the rewards from that because they’ve been fit and ready to go. Luckily, a lot of them have been winning.”

Asked if aims to fill his book with as many rides as possible, Hughes said: “Not really. You want to get as many good rides as you can. I’d rather it be more quality.

“I’m lucky enough that you can make a case for most of the horses I ride. You want to ride plenty but quality is essential.

“I’ve been riding long enough that I’ve struck up partnerships with trainers and owners that let me ride their horses and it all works well.”

King of the north he may be, but being recognised on the back pages as the best of the British tends to require success in front of the large Saturday crowds and at the Cheltenham Festival, the biggest stage of them all.

Just seven of Hughes’ 1,475 career wins have come at Cheltenham and he is not expecting that number to change much in the near future, with Aintree’s Grand National meeting in April a more likely target for McCain and the team.

“You’ve got to keep trying,” Hughes said. “We’ve got a bunch of young horses and a lot of novices so we’re just finding our feet with them.

“It’s trial and error, finding out what suits each horse best.

“Where Donald’s yard is situated and with a lot of the owners being fairly local, Aintree is what they look at and we’re never that busy at Cheltenham.”

For Hughes, success is not measured in headlines or accolades but purely by winners.

It is a drive that requires relentless dedication, much sacrifice and huge amounts of support from those closest to him, including wife Lucy.

“I get away Scot-free,” Hughes said. “Lucy looks after the kids and the horses and all the animals at home, while I just swan in and out, go racing and come back. She’s massive, she organises everything. My sister Elaine does a lot as well for me.

“It’s very selfish but I literally just have to get up and go racing or ride out. Between Lucy and Elaine, they sort my life out. Without them, I’d be struggling.

“I’m sure when I retire I’ll be repaying it bucket loads.”

It is a perfect recipe for success and one that keeps Hughes’ train rolling on and on, with no sign of stopping.