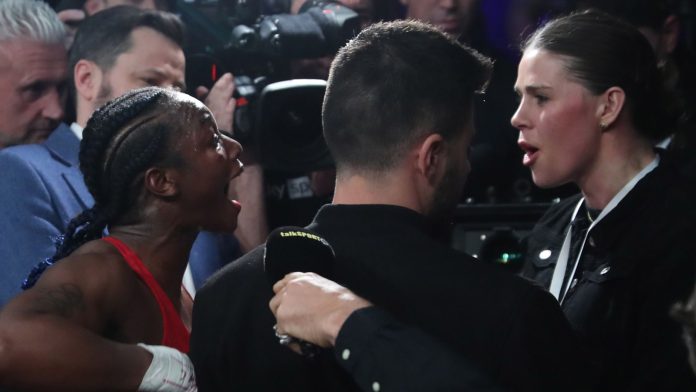 Katie Taylor says a potential fight between Claressa Shields and Savannah Marshall would be “absolutely brilliant” for women’s boxing.

Shields and Marshall had to separated following the American’s UK debut last weekend, with Marshall mocking the American’s performance as she claimed a unanimous decision over Ema Kozin in Cardiff to retain her IBF, WBA and WBC middleweight belts.

If Marshall defends her WBO title against Femke Hermans on March 12, live on Sky Sports, she is expected to fight Shields to decide an undisputed champion.

Marshall called Shields ‘the human equivalent of a migraine’

“We need to see more big fights like this,” said Taylor. “I know the likes of Claressa Shields and Savannah Marshall, those kinds of fights as well. That’s absolutely brilliant for the sport.

“They’re exactly the kind of fights we need to see on a consistent basis.

“We need big nights like this, and we’ve definitely covered a lot of ground over the last few years.

“In women’s boxing, we’ve seen the support, we’re breaking the seal here in terms of female purses for this fight as well.

“But that needs to continue, and we just need more and more big nights like this.”

Taylor: I’ve proved my heart, but has Serrano?

Taylor questioned Serrano’s heart ahead of their historic bout at Madison Square Garden, where they will become the first women to headline at the iconic New York venue.

Serrano is a seven-weight world champion but Taylor warned their fight will define the Puerto Rican’s legacy.

“I’m expecting and am preparing for the toughest fight of my career,” said Taylor, who beat Serrano’s elder sister Cindy in October 2018.

“I know I won’t be found short on grit or heart. My mind can take me to places that I have no right to go because I’ve been there before, both in the gym and on big nights.

“I don’t think anybody has ever asked the question, ‘does Katie have what it takes, to go to that place when the fight is in the trenches?’ That question has been answered.

“I’m not sure if Amanda has answered that question yet and I think her legacy will depend on the answer. I guess we’ll find out on April 30.”

Taylor, meanwhile, played down Serrano’s calls for the fight to be contested over 12 three-minute rounds.

“I want to continue opening doors for the new generation coming into this sport,” said Serrano, who took her professional record to 42-1-1 with a unanimous decision win over Miriam Gutierrez in December.

“I’m a woman for equality. We’re making history as the first women to headline at the Garden, we’re making the biggest payday for both of us, I think we should continue and make this fight iconic.

“If Katie Taylor’s willing, I’m ready and able to make this an equal fight of 12 rounds of three minutes.

“If we want to make change… We’re on the platform right now. This is all about equality, we should make the change right now.

Taylor replied: “I don’t really feel like that will make a huge difference. The fight is already iconic the way it is.

“It’s the best fighting the best. The winner of this fight is going to be the best pound-for-pound female fighter in the world.”