Home Sport F1 vows to ‘take action’ on anti-racism, instead of ‘gestures’ 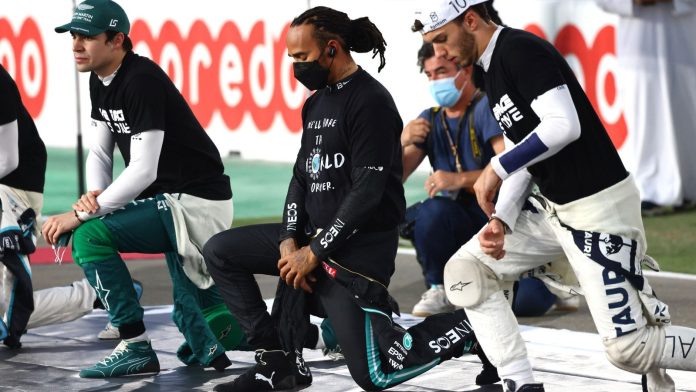 By Matt Morlidge and Craig Slater

Formula 1 boss Stefano Domenicali has revealed to Sky Sports that the sport will be shifting its anti-racism focus in 2022 amid the push for more diversity, insisting it is now time for “action” rather than “gestures”.

Since the start of the 2020 season, F1 has run a ‘We Race As One’ initiative and anti-racism message before races, with drivers then forming at the front of the grid where the majority have taken a knee.

But Domenicali has confirmed the sport is changing its stance, as while drivers are still free to take a knee, they will no longer be presented the formal opportunity to do so in a pre-race ceremony.

Speaking exclusively to Sky Sports News’ Craig Slater, F1’s president and CEO said: “I think the gesture has been an important gesture because we need to respect everyone, as always.

“But now is the time to move on and take some other action.”

Domenicali, whose interview coincides with F1’s new diversity push with an extension to its engineering scholarship programme, added: “We needed to make sure that what we did was important to show the intention of Formula 1 in things that were really important for the world.

“I think now it’s the matter of [changing] gesture, to action. Now the action is the focus on the diversity of our community, and this is the first step.”

Sky Sports understands Mercedes, whose driver Lewis Hamilton has been at the forefront of the push for more diversity and inclusion in the sport and beyond, supports F1’s stance.

F1’s engineering scholarship programme for under-represented groups started last year and will now be extended until at least 2025, enabling scholarships to be offered to 10 students each year.

Domenicali sure Hamilton is ‘fully charged’ for new season

Domenicali’s interview comes just days after Hamilton returned to the public eye for the first time in two months with a post on social media that read: “I’ve been gone. Now I’m back.”

While the post does not confirm Hamilton, who was said to be “disillusioned” with F1 following the controversial Abu Dhabi GP title decider, is definitely returning to the grid this year, it was certainly a good sign for the sport’s boss.

“I saw the last picture was a light of positivity on his face and his gesture,” said Domenicali. “I think that is important because Lewis is an incredible asset not only for our sport but for the world.”

Hamilton’s update was his first – barring a short interview after the December race – since losing the title to Max Verstappen.

“There was a total respect on his choice to be on silent mode,” said Domenicali. “I think he will be fully charged for the start of the season.”

He added: “Lewis has in front of him a possibility to be an eight-time world champion.

“So I’m sure he is totally focused on these objectives because this year there will be so many new things, so many variables, that will allow this championship to be so attractive.

“I’m sure he is totally dedicated to make sure he has a chance to be the eight-time world champion.”

F1’s 2022 season begins on March 20 with the Bahrain GP, amid a rules revolution for the sport. Before then, there are launches of the all-new cars, and two pre-season tests – starting in Barcelona on February 23-25.