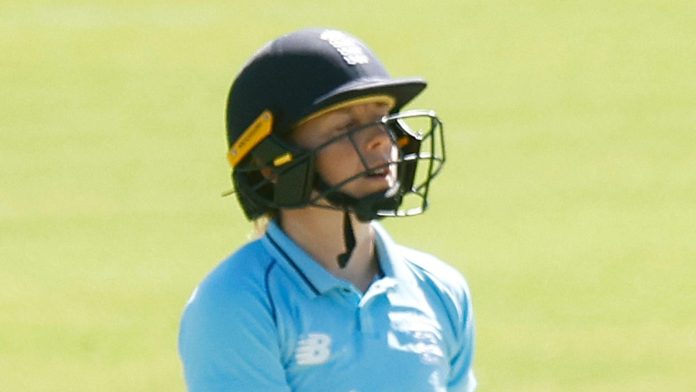 “We gave ourselves opportunities to win matches but we weren’t quite able to get over the line”; England captain Heather Knight was disappointed with her side’s lack of ruthlessness during the Women’s Ashes as they ended the multi-format series against Australia without a win

England captain Heather Knight said her side failed to capitalise when on top during the Women’s Ashes as Australia wrapped up the series in ruthless style in Melbourne.

With the series already gone, the tourists fell to an eight-wicket defeat in the third and final one-day international on Tuesday after being bowled out for 163.

Australia chased down their target with more than 13 overs to spare to remain unbeaten in the multi-format series and complete a 12-4 victory.

The hosts also won the opening two ODIs and the first T20 international, with England’s points coming from a draw in the one-off Test and a no result and an abandonment in the rain-affected second and third T20Is.

It is the first time a team has failed to win a single game in a Women’s Ashes contest since the multi-format was introduced in 2013, and comes hot on the heels of Australia’s 4-0 rout of England in the men’s Test series.

Knight feels her side were unable to make the big moments count.

“It has been a really good series, especially the start of the Test match and a few really tight games where we went toe-to-toe with Australia,” she said.

“But we couldn’t win those big moments and be ruthless in finishing off games. We gave ourselves opportunities to win matches but we weren’t quite able to get over the line.

“It’s been a brilliant series, it’s never easy touring Australia and there have been challenges to get the cricket on. I’m disappointed we haven’t been able to be successful out here in the Ashes.

“I think the last two games have been a bit mentally fatiguing, there’s a few injuries kicking around.

“We tried to go toe-to-toe with Australia which is a good strategy against them but we haven’t been able to win the big moments and they aren’t the type of team to give you too many opportunities.

“We haven’t become a bad side, we will go again and go again for the World Cup.”