Home Sport Champ out of picture for Gold Cup 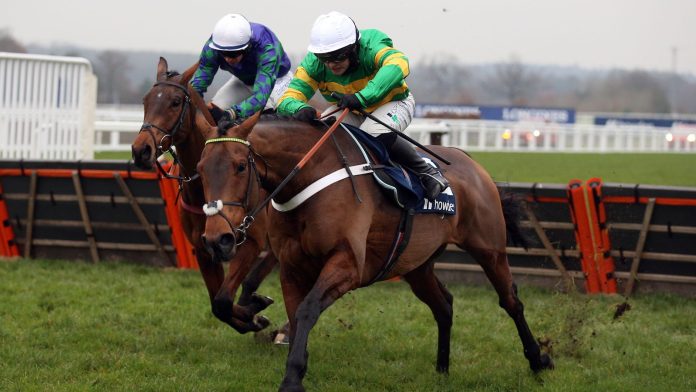 Champ has been taken out of the Boodles Gold Cup while Sharjah will miss the Unibet Champion Hurdle following the latest forfeit stage for the major Cheltenham Festival races.

Nicky Henderson’s 10-year-old Champ is already a winner at the big meeting having come from an unpromising position to land the 2020 RSA (now Brown Advisory) Chase and will take his chance in the Paddy Power Stayers’ Hurdle this year.

He ran in the Gold Cup last season, but was pulled up and it emerged he was suffering with a back issue.

The JP McManus-owned gelding started out this season back over the smaller obstacles, where he recorded an impressive success in the Long Walk Hurdle at Ascot. He has also has since run with credit in the Cleeve Hurdle, when second to Paisley Park.

“It think it just looked the obvious thing to do, he’s got to stay over hurdles now,” said Henderson.

“We’ve got Chantry House for the Gold Cup, we’re very happy with him. We all had a talk about it and the Stayers’ Hurdle just looks the right race for Champ.”

Veteran stablemate Buveur D’Air has also been taken out of his two engagements at the Festival, in the Champion and Stayers’ Hurdles, and he now has the Aintree Hurdle, which he won back in 2017, as his aim.

“There’s nothing wrong with Buveur, we’ve only really had major objective with him which is the Aintree Hurdle,” said Henderson.

“We want one run before that but we’ve only ever been aiming at the Aintree Hurdle, he ran very well in it last year.

“We think it would be unfair on him to use the Champion Hurdle as a prep race! That might be stretching it a bit far.

“I was thinking about the Kingwell (at Wincanton on Feburary 19), but he might not be ready for that but he could run in a handicap somewhere or something.

“It’s all been discussed and Aintree and Punchestown are his targets. We might get a run in before Cheltenham, but not in enough time to get him ready for Cheltenham so there wasn’t much point leaving him in.”

Sharjah has been second in the Unibet Champion Hurdle for the last years and was most recently seen winning the Matheson Hurdle at Leopardstown’s Christmas meeting for the fourth time.

Trainer Willie Mullins told www.sportinglife.com: “Unfortunately Sharjah won’t make Cheltenham and has been taken out of the race.

“The aim is to get him back for Punchestown, a track where he has already won the Morgiana Hurdle twice.”