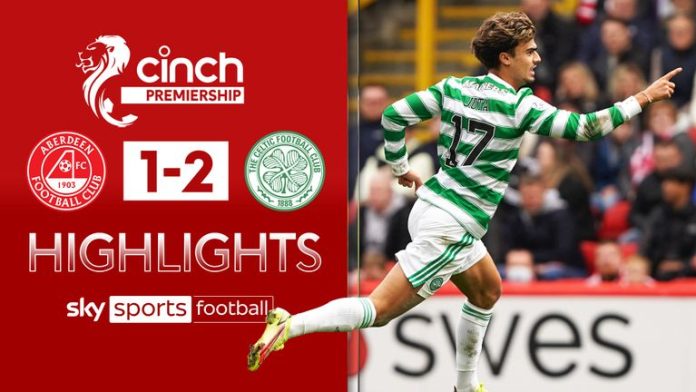 Ange Postecoglou always expected his Celtic players to take time to impose his preferred style of play on their travels but he feels they have shown they can do that.

Celtic beat Aberdeen 2-1 at Pittodrie in October to end an eight-month run without winning an away game in Scotland.

The hard-fought victory came courtesy of Jota’s late winner and after Postecoglou had suffered defeats in his first three league games on the road as well as three losses in European away games.

Highlights of the Scottish Premiership clash between Aberdeen and Celtic

Celtic have now won 11 and drawn one of their last 12 away games in Scotland as well as beating Ferencvaros in Hungary and just coming up short in a five-goal thriller in Leverkusen.

The latest away game was a 4-0 victory over Motherwell where the new Scottish Premiership leaders followed up their dominant derby win over Rangers with another classy display of attacking football.

“That’s part of the evolution of the team,” Postecoglou said.

“That’s always the tricky bit at the start, to get the team to believe we can play our football both home and away, until you achieve that and accomplish that, and the players embrace that even more.

“We tried to do it in Europe as well, whether that was playing away at Betis and Leverkusen. We didn’t win those games but it was further reinforced to the players that the way we play our football will be consistent irrespective of venue, opponent, competition.

“Again in theory that’s all great but you have got to get the buy-in through results as well.

“Since that (Aberdeen) game, you break the narrative of, ‘Can you win away from home?’ But, more importantly, ‘Can you play this kind of football away from home, in difficult conditions sometimes?’

“I think we have shown that we can do that. When you do it at a tough place like Pittodrie against a good side, it does give you that confidence that you can go away from home and win.

“It was important because the first three away games didn’t go well.”

With Rangers also winning heavily against a team in the top four at the weekend, beating Hearts 5-0 at Ibrox, some observers have questioned the wisdom of other Premiership teams voting through changes to the rules to allow five substitutes.

Highlights of the Scottish Premiership match between Motherwell and Celtic

But Postecoglou stressed the rule was more important for player welfare.

“If you look at the last two games, it’s not the five subs who made the difference, because we scored three goals in the first half,” he said.

“The subs for me help us in terms of managing the load on our players because we have got three games a week right up to the international break, and it will probably be the same afterwards.

“That’s a lot of football and if we want to maintain levels, intensity and tempo, we are going to have to manage our players through that process.

“Sometimes that’s going to mean making five subs, other times it might just mean we rotate players between games.

“You have got to have the squad to do that and we are getting to that space now where we have a core group of players beyond the 11 who are starting.

“In terms of managing the players’ loads, which protects the players, I think the five-sub rule will definitely help.”

Celtic are gradually recovering from the spate of injuries that affected them late last year and Postecoglou gave an update on the progress David Turnbull and Kyogo Furuhashi were making following hamstring tears.