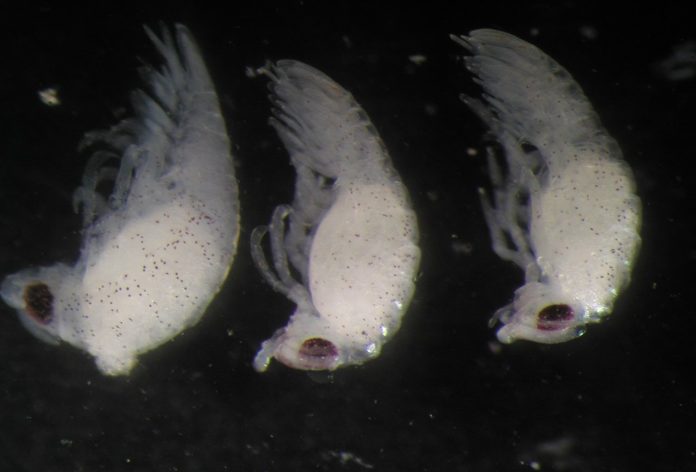 On a sunny day last summer, marine conservation science graduate student Don Marx was in his happy place — in a boat with a rod and reel in hand. The vessel drifted a few miles off shore near Cape Agulhas, the southernmost tip of the African continent. As a marine biology nerd and South African local, Marx knew the waters below him housed a particularly diverse ecosystem. Along this coastline, the cold, nutrient-rich water from the Arctic Ocean mixes with the life-giving warmth of the Indian Ocean, creating a hotspot for endemic species.

When he pulled in the next fish, Marx was pleased to see that it was a carpenter seabream, a near-threatened carnivorous fish. When he opened the creature’s mouth to pull the hook out, his day got a whole lot more interesting.

“Nothing could really prepare me for the moment I opened the carpenter’s mouth and saw this blue-eyed alien with a mustache staring back at me,” Marx told The Sun.

A Ceratothoa oestroides, a relative of C. springbok, in the mouth of a European sea bass. (Credit: Ivona Mladineo/Wikimedia Commons)

Marx took out his phone and snapped a picture. He would later discover he had captured the first-ever image of the parasitic isopod Ceratothoa springbok in its preferred habitat: the inside of a carpenter’s mouth. Once it finds a suitable host, the parasite swims through the fish’s gill cavity, latches onto its tongue (effectively replacing it) and lives off a portion of the food the fish eats. Colloquially, it’s known as a tongue-eating louse.

The Pursuit of a New Species

Nico Smit, a professor of ecology and zoology at North West University in South Africa, has studied members of the Ceratothoa genus for decades. In fact, he and his colleague Kerry Hadfield, an expert in fish parasitology, have documented 25 new species of Cymothoidae (the family that C. springbok belongs to) over their collective careers.

Smit and Hadfield’s search for the isopod had begun a decade earlier. During research for Hadfield’s PhD, the pair of scientists had convinced staff at the Iziko South African Museum in Cape Town to lend them their entire collection of preserved isopods. Smit and Hadfield then sifted through the samples, some of which dated as far back as 1904.

“In one bottle was this specimen that was 7 or 8 centimeters — it was the largest one we had ever seen,” Smit says. “We just started calling it ‘the big one.’”

Both Smit and Hadfield had a hunch that the creature was an undescribed species, but with a single poorly labeled museum specimen they had no chance of publishing. Then, long after they had given up hope, Smit’s brother sent him a WhatsApp message. On a roadside fishmonger’s table outside Cape Town, he had spotted an isopod in the mouth of a carpenter seabream.

Smit’s brother, who is not a scientist, sent the isopod to the researchers inside of a gin bottle. “It was ‘the big one,’” Smit says. “As soon as we knew that, we knew what the host was.”

With the new information, Smit and Hadfield were able to obtain 13 more samples of the isopod from colleagues. Finally they had context — the new specimens allowed them to differentiate the species’ physical characteristics from the idiosyncrasies of a lone sample. They measured eyes, antennae, scales and heads (cephalons in crustacean terms).

Above all, the new samples made it clear that this was the largest species of Ceratothoa known to science. When it came time to publish, Smit and Hadfield named the species after the South African National Rugby team The Springboks in honor of their 2019 World Cup win. “Similar to this species, the Springbok rugby team also stood out as the biggest among their peers,” they wrote.

It may have taken Smit and Hadfield a decade to identify Ceratothoa springbok, but the species has been going about its business, unbeknownst to us, for far longer than that. Over millions of years of evolution, the parasite has developed a miraculous niche.

The life of any Ceratothoa species is especially precarious in the beginning. After leaving its mother’s brood pouch, the larvae disperse into the wide ocean. The larvae have the most difficult task because they must find a host, Smit says.

While most of their siblings swim around in vain until they are too tired to go on, a select few larvae find a host, latch on and eat their first meal of fish blood. After drinking their fill, each isopod molts into its adult form and moves toward the fish’s gill cavity.

Here’s where it gets interesting: Ceratothoa species are all born male. They’re considered protandrous hermaphrodites since they actually change from male to female, Smit says.

If the newly arrived male is the first to infect its host, it will migrate to the fish’s tongue, latch on and molt into an adult female. Once it takes up residence in its host’s mouth, the female will secrete hormones that keep any new arrivals male. Through this adaptation, the species ensures that any two Ceratothoa that arrive on the same host will be able to mate with each other.

“In an environment where it is incredibly difficult to find the right host — because they are somewhat host specific — you want to make sure that your lineage is passed on,” Smit says.

And if a second male arrives at a fish with a pair of Ceratothoa already attached, it will simply move on to the next host. There’s no need for him to hang around because the deed is done, Smit says.

Once the two isopods mate, the female grows so large that she loses her ability to swim. She will live out the rest of her life in her chosen host. Soon, her brood pouch is full of eggs, which in turn develop into larvae. And the cycle begins again.

Smit acknowledges that imagining a tongue-eating parasite is bound to make your skin crawl. In fact, when the producers of the 2012 found-footage horror film “The Bay” asked to use one of his photos of Ceratothoa famosa for the film, he wholeheartedly agreed. But the ecological impacts of these isopods are surprisingly un-horrific.

“We haven’t found any difference in the condition and health of these fish species whether they have an isopod on their tongue or not,” Smit says. “The whole evolutionary drive of parasitism is to not kill your host.”

Once an isopod lodges itself inside of a fish’s mouth, the creature has a vested interest in keeping the fish alive. It is reliant on the fish for food and shelter. In fact, the host species relies on the parasite to feed itself.

The function of the tongue is to press the food into the upper palate, he says. “Because we can’t find any difference in host health, we assume that the isopod functions as the tongue.”

Though these parasites seem to be harmless in the wild, they can spell disaster for commercial fish farms. When a single species of fish is packed so closely together, the isopods spread rapidly between them. After a few generations, the water is so thick with blood-sucking larvae that the fish become anemic.

“You’ll have a situation where you get the simultaneous release of thousands of larvae released into one shoal of fish,” Smit says. “It will kill them off. In the wild this will never happen.”

Fish farmers may hate them and scientists may love them, but it’s hard not to be fascinated by Ceratothoa species. Just hope you don’t glimpse one staring right back at you the next time you pick up a fish.