Home Sport ‘He’s one of our better players’ – Moyes explains starting Zouma after... 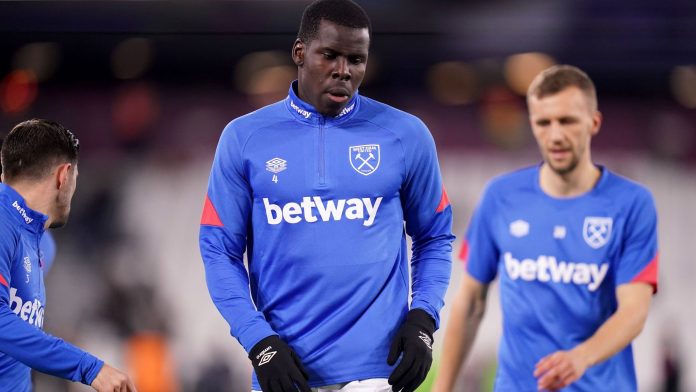 Kurt Zouma’s shocking cat-attack video did not impact the decision to start the West Ham defender against Watford because “he is one of our better players”, said manager David Moyes.

Zouma was condemned by his club, the RSPCA and other animal welfare groups after a disturbing video emerged of him hitting, dropping, and kicking his pet across his kitchen floor on Monday.

The 27-year-old Frenchman issued an apology but Essex Police have since confirmed “urgent enquiries” are underway in conjunction with the RSPCA.

Yet despite the widespread outrage and revulsion towards the video, boss Moyes controversially stuck with Zouma, naming him in the Hammers’ starting line-up for Tuesday’s Premier League match against Watford at the London Stadium.

When asked before kick-off if the video had had any influence on his decision to play Zouma against Watford, Moyes told BT Sport: “No, because he is one of our better players. But it is certainly ongoing and the club are dealing with it, so that is a separate matter.”

Moyes comments came shortly after Essex Police released a statement confirming they were conducting their own enquiries into the incident, which the Metropolitan Police has decided against investigating earlier on Tuesday.

The statement read: “We are aware of a video circulating on social media relating to an incident involving a cat which members of our communities may find distressing.

“We have recently been made aware that this incident may have taken place in Essex and we are liaising with the RSPCA and urgent enquiries are ongoing.”

Zouma’s brother, Yoan, is believed to have filmed the incident inside the defender’s home before posting it to Snapchat on Sunday afternoon, just a day after West Ham’s FA Cup fourth-round win at Kidderminster.

Zouma can be seen in his kitchen picking up the cat before dropping it and booting it into the air across the kitchen. He is also seen chasing the Bengal cat around his dining room in front of a child while the cameraman is heard laughing.

The £30m former Chelsea centre-back is then filmed throwing a pair of shoes at the animal as it tries to escape. A final clip shows him slapping the cat in the face and out of the child’s arms.

“This is a very upsetting video. It’s never acceptable to kick, hit or slap an animal, for punishment or otherwise,” an RSPCA spokesperson said.

“We are so grateful to people who report suspected animal suffering to us and we would like to reassure people we will always look into and, if necessary, investigate any complaints made to us about animal welfare.”

Zouma issued an apology for the attack and insisted it was an isolated incident.

“I also want to say how deeply sorry I am to anyone who was upset by the video,” he said. “I would like to assure everyone that our two cats are perfectly fine and healthy.

“They are loved and cherished by our entire family, and this behaviour was an isolated incident that will not happen again.”

A West Ham statement said: “West Ham United unreservedly condemns the actions of our player, Kurt Zouma, in the video that has circulated.

“We have spoken to Kurt and will be dealing with the matter internally, but we would like to make it clear that we in no way condone cruelty towards animals.”