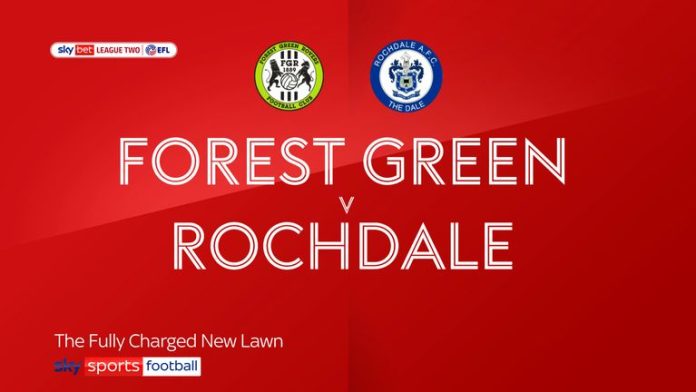 Matt Stevens’ goal four minutes from time saw runaway leaders Forest Green come from behind to maintain their 10-point lead at the top of League Two as they beat Rochdale 2-1.

Rochdale had nosed ahead after 47 minutes when James Ball fired in.

Rovers got back into the game with 17 minutes to go through Barnsley loanee Jack Aitchison before Stevens popped up at the death to make it 18 games unbeaten for Rob Edwards’ side with his 20th league goal of the season and his 10th in as many games.

Forest Green bossed a tepid first half – Aitchison driving into the box and inducing a diving save from Joel Coleman who did even better moments later with a gloved response from Jordan Moore-Taylor’s stinging header.

Rovers upped the tempo with Ben Stevenson hitting the base of the post from the edge of the box. Ebou Adams came close to breaking the deadlock when his left-footed strike went just wide from 25 yards.

Rochdale took the stuffing out of Rovers just two minutes after the restart as Corey O’Keeffe cut the leaders open for Liam Kelly to pick out Ball who fired beyond the exposed McGee.

Rovers drew level after 73 minutes as Jamille Matt fed Aitchison to bury a sumptuous strike from the edge of the box.

Baily Cargill headed against the bar from Dom Bernard’s cross as Rovers looked for the winner and they found it when Stevens’ header from Kane Wilson’s cross squirmed through the fingers of Coleman.

Ball almost snatched a point for Rochdale in stoppage-time but dragged his shot wide at the death.

Work smarter: Connect your Mac to an extra monitor