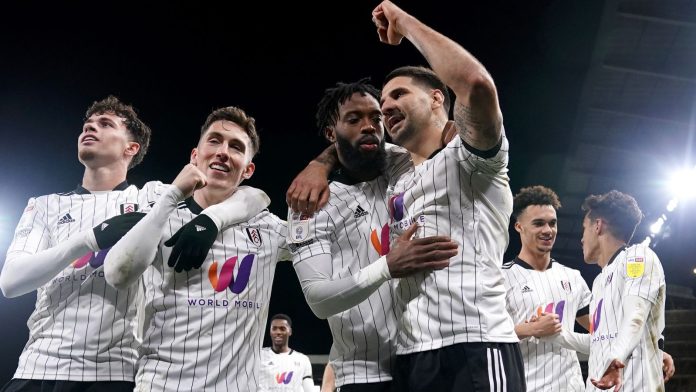 Aleksandar Mitrovic took his goal tally in this season’s Sky Bet Championship to 30 as Fulham beat Millwall 3-0 to move eight points clear at the top of the table.

Mitrovic opened the scoring in the 29th minute and doubled the home side’s lead shortly after the interval by firing in the rebound after Harry Wilson’s shot had been saved.

Bobby Decordova-Reid rounded off the scoring in the closing minutes as Marco Silva’s side extended their cushion over nearest rivals Blackburn.

Highlights of the Championship match between Fulham and Millwall

Luton are outside the play-off places on goal difference following a 2-1 win over bottom side Barnsley.

Allan Campbell’s opener was cancelled out by Carlton Morris on the stroke of half-time, but Brad Collins brought down Fred Onyedinma in the area on the hour mark and Elijah Adebayo converted the resulting penalty.

Stoke moved to within three points of the play-off places with a 3-0 win over 10-man Swansea.

Jaden Philogene-Bidace celebrated his 20th birthday with the opener just two minutes into the second half and Lewis Baker made it 2-0 from the penalty spot after Swansea defender Ryan Bennett was sent off for handling the ball on the line.

Highlights of the Championship match between Derby County and Hull City

Craig Forsyth’s header in the 19th minute put the home side in front and Tom Lawrence doubled the lead before the break turning provider for Festy Ebosele to make it 3-0 two minutes into the second half.

Forsyth’s own goal in the 65th minute gave Hull a glimmer of hope, but the Rams ran out deserved winners to move within four points of safety.

Coventry and Blackpool remain in mid-table following a 1-1 draw, Gary Madine’s 24th-minute opener for the visitors cancelled out by Viktor Gyokeres shortly before the interval.

Kayode scored moments after coming off the bench to fire the Millers nine points clear at the top of the table.

Karl Robinson’s team were unbeaten in four matches and are one of the top scorers in the division but they drew a blank at the Wham Stadium.

Barry Bannan’s penalty early in the second half gave Sheffield Wednesday a narrow 1-0 victory over Wigan to make it a fourth straight win.

Defender Harry Darling headed home Scott Twine’s free-kick to put the Dons ahead after 12 minutes on a rain-sodden night at Highbury Stadium.

But Lane was on hand to cancel it out six minutes after the restart, and deny MK Dons the chance to leapfrog Wigan into second spot.

Wycombe could not make their dominance count as they were held to a frustrating goalless draw by Shrewsbury at Adams Park.

Alfie May scored the winner as Cheltenham came from a goal down to stun managerless Sunderland 2-1 at the Jonny-Rocks Stadium.

The struggling Robins were without a win in 12 games and they fell behind in the first half to Alex Pritchard’s perfectly placed free-kick in the 32nd minute.

But Cheltenham levelled through Elliot Bonds’ first goal for the club in the 64th minute and the Black Cats conceded again with 12 minutes to go.

Ryan Hardie bounced back from his FA Cup penalty miss at Chelsea to score a second-half hat-trick as Plymouth came from behind to thump strugglers Crewe 4-1.

The striker passed up the chance to make it 2-2 late in extra-time at Stamford Bridge at the weekend when Kepa Arrizabalaga kept out his effort from 12 yards.

But he made amends in style as his treble kept Argyle three points off the play-off places.

Gillingham moved to within five points of safety after Vadaine Oliver’s goal four minutes from time fired them to a crucial 1-0 victory over Cambridge.

First-half goals from Morgan Whittaker and Cohen Bramall helped Lincoln earn a vital three points in their quest to move away from the drop zone as they beat Morecambe 2-1.

Toumani Diagouraga pulled a goal back for the Shrimps but despite some late pressure, they were unable to secure an equaliser.

Tyreeq Bakinson scored the only goal of the game as Ipswich kept pace with the play-off chasers following a 1-0 win at Doncaster.

Town, six points off the top six, were the dominant outfit throughout as bottom side Rovers struggled to make an impression on the game.

Michael Jacobs scored one goal and made the other as Portsmouth beat Burton 2-1to pick up their first win of 2022.

Elsewhere, defender Will Aimson scored his first goal for Bolton to earn his side a fifth victory in six league games with a late winner in a 2-1 victory over Charlton.

Rob Edwards’ side had to come from behind to extend their unbeaten run to 18 matches as James Ball gave Rochdale a shock lead after a goalless first period.

Jack Aitchison hauled Forest Green level deep in the second half and Stevens’ header four minutes from the end clinched them all three points.

Tranmere stay second as Kane Hemmings’ double helped them to a 3-0 home win against Swindon.

Hemmings struck in either half with his early opener and 72nd-minute penalty sandwiching Paul Glatzel’s effort just before the hour-mark.

Fraser Horsfall’s late effort clinched Northampton a 1-0 win against Newport at Sixfields and lifted them into an automatic promotion place.

The Cobblers leapfrogged up to third over Sutton, who were held to a goalless home draw by Salford.

Mansfield made it nine wins in 10 league games with a 2-1 home victory against Colchester.

It was a good night for the bottom two, with Scunthorpe and Oldham both securing wins as all seven clubs immediately above them lost.

Scunthorpe halted a run of seven straight league defeats with a 1-0 home win against fellow strugglers Walsall, courtesy of Jai Rowe’s first-half header and despite the 53rd-minute dismissal of Tom Pugh for his second yellow card.

Oldham made it back-to-back league wins for the first time this season under manager John Sheridan as they beat Bristol Rovers 2-1 at Boundary Park.

Davis Keillor-Dunn’s first-half double put Oldham in control and although Sam Nicholson reduced the deficit for Rovers before the interval, the Latics held on.

Carlisle slipped to a fourth consecutive defeat, losing 3-1 at home to Port Vale.

Crawley maintained their climb up the table with an impressive 3-1 win at Harrogate.

Hartlepool registered their first league win in five thanks to Luke Molyneux’s double in a 3-1 home win against Barrow.

John Rooney fired the visitors into a first-half lead, but Hartlepool hit back, with Molyneux’s double and Omar Bogle putting them 3-1 up at the break.