Home Sport Sherrock in the Premier League? What the players think… 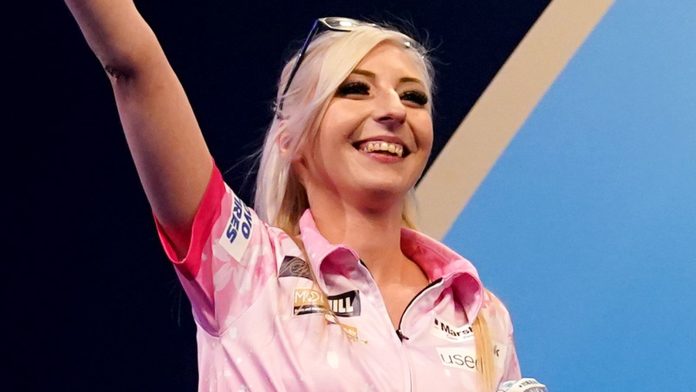 Quiz Fallon Sherrock’s rivals on her Premier League credentials and the verdict tends to be unanimous – secure that tour card and then let’s talk.

The easy answer might have once been a red carpet rollout for the Queen of the Palace, but by now the tungsten elite know they owe her more than feigned or trendy appreciation.

It’s perhaps testament to her ascent thus far that Sherrock falls under the run-of-the-mill ‘earn your shot’ category; here she is as a legitimate one to watch for years to come, with the finishing, global reach and big stage prowess others around her chasing a Premier League spot might only dream of.

If reaction to her future contention is ‘change the tune’ bandwagoning, it should be reminded that not once has Sherrock sought acknowledgement as anything but a competing player, nor has she personally thrust herself into the Premier League discussion. Her success in front of the cameras has done that, and after all, few can match the growth potential she offers the sport.

Sherrock recently missed out on a PDC Tour Card after failing to qualify from Q-School, and subsequently did not make the cut upon the announcement of the eight-player field for this season’s reformatted Premier League.

“The first step I think she has to concentrate on is to try to get a tour card and of course to do well on the women’s series, and from there on build to something bigger,” said Michael van Gerwen.

“It takes time – they won’t give it to her for free – you have to actually perform. Of course she’s done well in the past but it has to be slightly more.”

Masters champion Joe Cullen makes his debut in the competition after winning his maiden PDC major title, while Michael Smith and Gerwyn Price return after missing out last year, the latter being replaced by James Wade after testing positive for COVID.

Recently-crowned two-time world champion Peter Wright believes Sherrock would have had a chance had the field been larger.

“I think if it was more players involved, yes,” said Snakebite. “Not just the ruthless eight. It’s going to be bad enough for the eight players. Maybe if there was 10 players I would have said she would have a squeak of getting.

“She’s an awesome darts player, fantastic – great for women’s darts, great for darts in general. But seeing as it’s just down to eight, I could pick another six players that could be in this Premier League, so it’s very difficult to pick. “

Sherrock’s rise to stardom has been built on her impact before the eyes of the world, stemming from her landmark Alexandra Palace debut as she knocked out Ted Evetts to become the first woman to beat a man at the World Championship before seeing off Mensur Suljovic to advance to the third round.

She impressed again to reach the final of the Nordic Darts Masters on her World Series bow in September, only to lose 11-7 to Van Gerwen, and made it to the quarter-finals of the Grand Slam of Darts in November.

“If they start a women’s Premier League, maybe she’ll be in,” said Price.

World Championship finalist Smith added: “She needs a tour card first and then once she gets a tour card and plays on the circuit with us, then who knows, maybe. As for now, I think the selection we’ve got with these eight players are the best around at the minute.”

Sherrock topped the 2021 PDC Women’s Series Order of Merit to qualify for the Grand Slam and World Darts Championship alongside Lisa Ashton.

She can book her return to the Grand Slam in 2022 by winning the newly-announced Women’s World Matchplay, which will mark the first PDC women’s tournament to be fully televised.

Women’s Matchplay ‘great for the youngsters’

The competition will see the top eight players from the 2022 Women’s Series Order of Merit after the 12 events scheduled to take place over the first half of the year.

Price believes continued commitment to expanding the women’s game can contribute to its growth across all platforms.

Four-time BDO women’s world champion Lisa Ashton is second behind Sherrock on the Order of Merit, followed by Deta Hedman and Mikuru Suzuki.

The first of the 12 Women’s Series events takes place in Barnsley on the weekend of March 12-13 followed by a meeting in Wigan and a return to Barnsley.

“I think that’s great – great for the ladies game and great for the youngsters – the young girls, young women out there, giving them something to go for,” said Wright. “They’re going to be playing on Sky at the Matchplay itself, so it’s really good.”

“Of course it’s all part of it and they have to work really hard because women’s darts has to come a long way. With the help of the PDC I think they can achieve really big things in a really short period.”