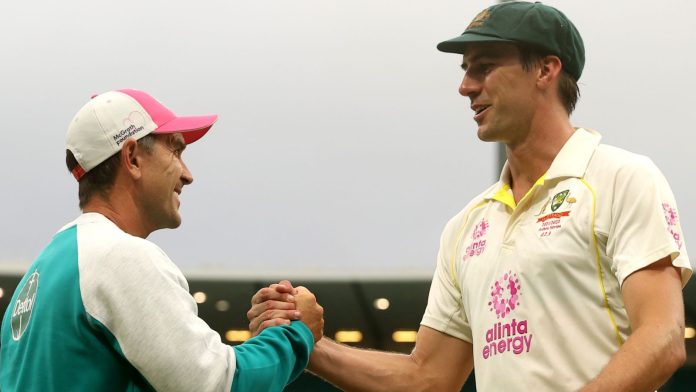 Pat Cummins: “I think the players benefit from a more collaborative approach. A big theme this summer was to be more calm, more composed. That’s been the feedback from the players, staff and Cricket Australia that that’s the direction we want to take the team.”

In the wake of Langer’s resignation on Saturday, Cummins and his team have been lambasted by several retired players for not publicly supporting the coach.

Langer left after a near four-year reign that was widely seen as instilling integrity and discipline in a team that had been disgraced by a ball-tampering scandal against South Africa in 2018.

His tenure culminated in a 4-0 beating of England in the Ashes series that ended last month.

Cummins said Langer’s renowned intensity was not the reason he had only been offered a six-month contract, describing Cricket Australia’s position as a “brave call”.

The captain said: “I think the players benefit from a more collaborative approach.

” A big theme this summer was to be more calm, more composed. That’s been the feedback from the players, staff and Cricket Australia that that’s the direction we want to take the team.”

Cummins praised Langer for driving high standards but said CA’s decision to move the coach on would not have come as a “big surprise” to him after two years of evaluation.

In a statement issued an hour before he was due to address reporters on Langer’s exit, Cummins said he was “sticking up for my mates”.

“There has been much public comment since Justin Langer’s resignation as the coach of the Australian cricket team,” said Cummins.

“For good reason, I haven’t made public comment before today.

“I’d never do that. I believe in respecting the sanctity of the change room and proper process.

“Now that a decision has been made by Justin to resign and given his own public comments and others by Cricket Australia, I can provide some clarity.

“Justin has acknowledged that his style was intense. And it was. He has apologised to players and staff for his intensity. I think the apology was unnecessary. Because the players were okay with JL’s intensity.

“It came from a good place – his fierce love of Australia and the baggy green – something which has served Australian cricket well for three decades.”

Cummins’s statement came after former Australian cricketers including Ricky Ponting, Shane Warne, Adam Gilchrist and Matthew Hayden criticised CA over the way Langer was treated when the team had just won a World Cup and the Ashes.

Cummins clarified that Langer’s “intensity was not the issue for the players and the support staff”, before addressing criticism levelled at the outgoing coach by former cricketers.

He said: “We also have a duty to our mates. Many former players have reached out to me and silently offered me their advice which is welcome.

“Some others have spoken in the media – which is also welcome and comes from a love of the game and their support of a mate.

“To all past players, I want to say this: Just as you have always stuck up for your mates, I’m sticking up for mine.”

Nasser: Why Langer or Ponting would fit England

Langer is a possible contender to replace Silverwood, with interim managing director of England men’s cricket Sir Andrew Strauss refusing to rule the 51-year-old out of the role, with Hussain believing the Ashes-winning coach would be a good fit for the England set-up.

“Langer would be very good for two reasons,” Hussain told Sky Sports News. “He has just played against England, so knows exactly where their strengths and weakness lie, as he’s literally been there and seen it.

“He’s also the type of character England need at the moment. They do need that micro-management and they do need that kick up the backside. There are not performing, and they’ve got to get results going, so Langer would be a good candidate.

“For me, Ricky Ponting would be an exceptional candidate. I’ve worked with Ricky and the moment I walk into a commentary box and listen to what he says or look at what he does in the IPL with Delhi, I just think that this lad has got a fantastic cricket brain.