Home Sport Skelton: Ground can give Lucki the edge in Edwardstone rematch 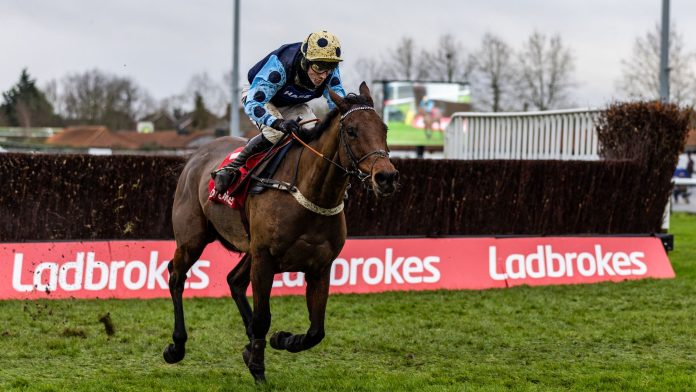 Third Time Lucki was sent off the 9/5 favourite for the Grade One Henry VIII Novices’ Chase at the Esher in December having won his first two starts over fences, but he proved no match for Edwardstone, finishing 30 lengths behind Alan King’s victor in third.

The seven-year-old has subsequently bounced back to form with a bloodless Grade Two strike on good ground at Doncaster last month and Skelton feels Third Time Lucki can avenge his defeat, as long as conditions remain in his favour.

He said: “I think the going is about what we expected at this point on Wednesday. I think it’s highly probable, especially on the chase track, that it will ride a lot better, it normally does and I would say that will be suitable for us.

“As long as it’s good to soft and no softer, he’ll be there.

“With the ground in our favour we can (turn around Sandown form), if we were to get some rain out of somewhere and it was soft in places then I wouldn’t be running him as the advantage definitely flicks to Edwardstone at that point.”

Third Time Lucki is a general 6/1 chance for next month’s Sporting Life Arkle Challenge Trophy Novices’ Chase at the Cheltenham Festival, but Skelton admits he will not run his charge should the weather take a turn for the worst before March 15.

He added: “People might say ‘why are you not going straight to the Arkle’, but I have a theory that when it starts raining, it’s going to keep raining and I could just envisage a scenario where Cheltenham’s very, very soft because we’ve had no rain realistically.

“History will tell you that throughout the course of a year you get the same amount of rain and if you don’t get it one month, you get it another.

“If it came up really soft at Cheltenham, Third Time Lucki actually wouldn’t be there, I wouldn’t ask him to run around on soft or heavy, it’s just not his cup of tea.”

Skelton also has Faivoir entered in the Kingmaker, but the trainer added: “He’s not running unless we got to tomorrow morning and they’d had 15mm of rain out of nowhere.

“I would run Faivoir if it was soft, but I’m not going to declare Faivoir as well. As it stands Faivoir is not running and Third Time Lucki is.”

Warwick clerk of the course Tom Ryall is not anticipating any kind of deluge.

He said: “We’re currently good to soft, soft in places. We had a dry couple of weeks, but we were lucky over the weekend as we got nearly 20 millimetres from Friday to Sunday.

“The forecast is dry from now on, but we’re in a good place and it’s not going to dry out too much.”

The ground is also key to Skelton’s plans for the Virgin Bet Warwick Mares’ Hurdle, in which he has entered Molly Ollys Wishes and Get A Tonic.

Molly Ollys Wishes won an Ascot Grade Two on her most recent start and Skelton thinks conditions are “borderline” for her at present and could instead wait for an alternative target at Haydock next week.

He said: “I’ve yet to decide, again I need to see the ground. Molly Ollys only ran 21 days ago, Indefatigable runs in this, Harry Fry’s (Whitehotchillifili) does, I don’t know if Nicky Henderson (Marie’s Rock) runs, so it’s no gimme.

“An extra week and going to the Rendlesham with Molly Ollys Wishes could be high on the agenda. We will work her and see how she goes and that will give an indication of her well-being and then the other thing is the ground.

“I would say, as it is, it is borderline for her. She definitely likes it a little slower.”

Should Molly Ollys Wishes miss out, Skelton would send Get A Tonic, who has won at maiden and novice level this term.

The trainer said: “If I didn’t run Molly Ollys, I would run Get A Tonic, but obviously being a novice in that field, you would have to realistic about her chances against those higher-rated horses.

“She’s no back number, I think she’s a mare, especially next season when she goes over fences, who can be significantly above average.”