Home Culture Which companies paid the reported $9m to air 30-second ads at this... 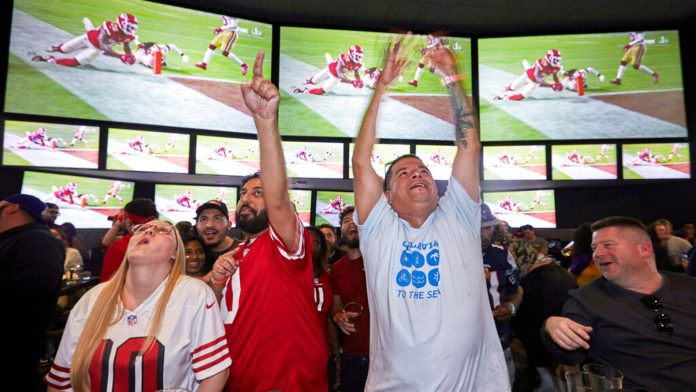 And nothing underlines the US’s capitalistic credentials like companies forking out a reported $9 million (£6.62 million) to air an advert for 30 seconds during the game, which this year takes place in Los Angeles.

Sky News has taken a look at the five of the companies who have taken out commercials during the game, and the big-name stars appearing in them.

She’s making an acting comeback this year in a Netflix Christmas film, but before that, she is centre stage in an ad for Super Bowl newbies Planet Fitness.

Lays Crisps (that’s Walkers to you and me) bring back the on-screen bromance between the seemingly never-ageing Paul Rudd and Pam And Tommy star Seth Rogan.

In the 60-second spot (presumably costing the snack giant close to $20 million…), it appears Rudd is trying to help Rogan shake off his cold feet ahead of his marriage by reminiscing about their time together.

The iconic American car company General Motors is no stranger to the Super Bowl, and this year it has teased an Austin Powers reunion.

Not wanting to give anything away, it has only released a short clip, but in it we see Dr Evil (Mike Myers), Scott Evil (Seth Green), Frau Farbissina (Mindy Sterling) and Number Two (Rob Lowe).

Its ad in 2021 had Will Ferrell in the starring role.

Hollywood power couple ScarJost appear in a spot for Amazon – which comes in at an eye-watering 90 seconds (surely it would have got a discount on the $27 million fee?!).

The couple joke, as many of us have, that Alexa is reading their mind, before imaging what that might look like on a daily basis.

The logistics-come-movie-production company has found a winning formula with married couples, after Ellen DeGeneres and wife Portia De Rossi appeared in its 2020 advert.

US cooking icon Guy Fieri appears in Bud Light’s ad for its new hard seltzer as the mayor of Flavour Town – his famous catchphrase.

In the 60 second spot he declares the drink to be the loudest flavour in the town – much to the delight of the Fieri lookalikes in the ad.