Home Sport Davy Russell: I’m in the 10 per cent who can walk again 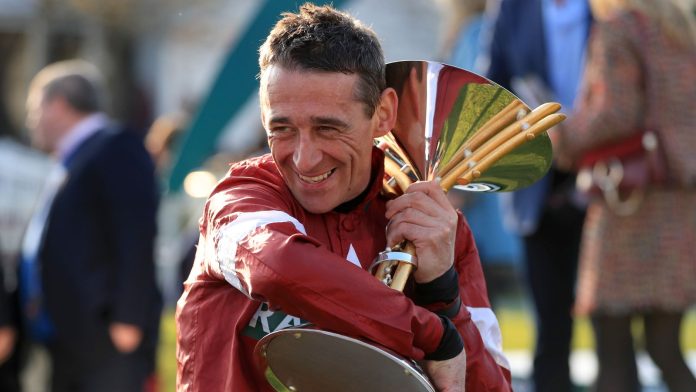 Leading Irish jockey Davy Russell has said he is lucky to be able to walk again having endured a “torturous” 11-month rehabilitation process from a horror back injury.

The Cheltenham Gold Cup and Grand National-winning rider sustained a fractured and dislocated vertebrae when Doctor Duffy fell at the first fence in the Munster National in October 2020.

That injury meant 42-year-old Russell missed the majority of the last National Hunt season, including the Cheltenham and Aintree Festivals.

While the likes of Cheltenham Gold Cup prospect Galvin were winning at the Festival, mounts Russell would have no doubt taken, he was having bolts drilled into his head and weights added to the back of his head in order to address the dislocation in his back and spine.

Russell says he could retire at any point and be happy with what he has achieved, having looked to the likes of Tom Brady for confidence at being able to still compete at the top level

But despite the rehabilitation Russell describes as “torturous”, the former Irish champion jockey told Sky Sports Racing that he considers himself fortunate just to be able to walk.

“The surgeon said I was in the 10 per cent of people who had that injury who walk again so its good to be in that,” Russell told Kieran O’Sullivan.

“It was a simple fall, I just landed awkwardly and fell on the top of my head and compressed down.

“I broke one, crushed another and dislocated another so I knew I was in a bother when it felt like a firework went off in my thumb.

“There wasn’t a huge amount of pain, just discomfort and I actually thought it was my shoulder that was broken.

“All the medical staff were fantastic – I had to go into traction to stretch me out to put the dislocation back in.

“When they were operating they had to go through the front and they didn’t want anything in the way.

“They bolt into the side of your head and add water and weights till it opens up enough to allow it back in and that was pretty torturous.”

Russell also had several minor setbacks along the way, meaning in the end it would be a total of 11 months out of the saddle.

Since his return, he has arguably been riding as well as ever.

Despite questions about his retirement during the injury lay-off, he is in no rush to quit the saddle, despite ribbing from retired weighing room colleagues AP McCoy and Barry Geraghty.

“My surgeon was always very upbeat,” he added. “He’d seen that injury in the past with a lot more impact sports than I have. We get falls but we don’t get falls every day.

“I had an awful problem of lifting my neck up to see the full landscape and it was only a few days before Cheltenham.

“I couldn’t see everything I needed to see – I could only see the horse’s tail in front of me and not the broader picture.

“I didn’t renew my licence till a few days before I came back. We schooled a few horses one day and it just clicked – it was time to come back riding.

“The beauty is now I can retire in the morning happy – it was great to come back and win the Irish Gold Cup but I’m not afraid. My bottle is intact and I have nice horses to ride.

“I was talking to AP McCoy and Barry Geraghty at the weekend and they were saying 48-year-old Davy Russell!

“It might be that long and it might not. It’s not really in my thought process and I’m just happy enough to have pushed myself and I didn’t wimp out when I could’ve.”

An unlikely inspiration for Russell comes in the form of seven-time Super Bowl-winning quarterback Tom Brady, who recently retired from playing in the NFL at the age of 44, having spent over 20 years at the top of the sport.

“Tom Brady is one that’s always in the back of my head because that’s a tough sport,” Russell added. “He has a target on his back the whole time so he’s one that you’d definitely be getting confidence from it.

“One thing that has kept my career going for longer is that Michael O’Leary has always insisted on increasing my riding weight and I didn’t listen.

“I was doing 10st 6lb or 10st 5lb and that was tough. I was murdering myself really and I realised that something had to change and it was that.

“My weight has just stabilised and I can eat reasonably normally – I still sweat a bit but not as much.”

Russell also weighed in on the ongoing debate around jockeys’ weight, insisting that saunas being taken out has helped his day-to-day approach to life, and that his family have also enjoyed the positive effects.

“The addition of the saunas being taken out has helped a lot because my approach to the day is much better.

“There’s no panicking about rushing in, losing 2lb and then going in a drinking a can of coke to get that sugar rush and put that back on. It’s a vicious circle as you are putting it on and bringing it down again.

“It’s definitely not good for your mind and your approach to the day. I’m getting home in the evening if I’ve not performed on the racecourse and everyone is feeling the effects of it.

“Even the fella inside the garage on the way home feels the effects of it! Some person might just come to you and say hi and you are thinking ‘what does this fella want?’.

“You become paranoid but now everything is grand and a lot happier.”