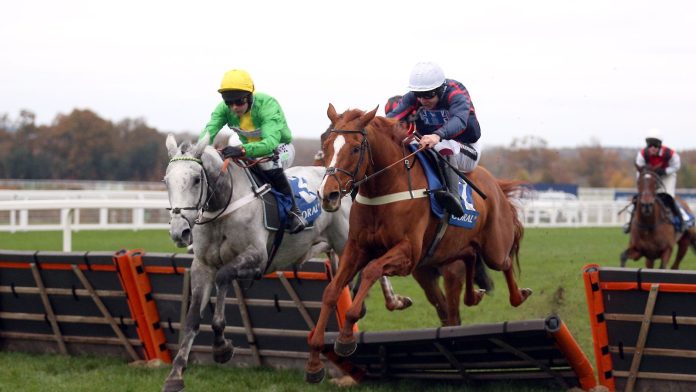 Nicky Henderson’s popular grey Buzz has taken the next step in his recovery from a fractured pelvis.

The dual-purpose gelding gave Henderson a Cesarewitch victory in October and then switched back to the National Hunt code to claim the Grade Two Coral Hurdle at Ascot in November.

A return to the latter track for the Grade One Long Walk was the next intended port of call, but he met with a significant injury the day before the race when fracturing his pelvis on the gallops.

Buzz initially began his recovery cross-tied to avoid aggravating the fracture, but his convalescence has gone smoothly thus far and he will now begin a three-month spell of box rest loose in his stable.

“We’re updated by the yard every few days, since he was released from his cross-ties we haven’t heard anything, no news is good news as far as I’m concerned,” said James Stafford of ownership group Thurloe Thoroughbreds.

“It would only mean trouble if we got a phone call to say he’d gone down and couldn’t get up or was cast, but he has been absolutely fine.

“He has been an admirable patient and he is very happily self-isolating.

“It is relief to have him out of the cross-ties, it’s a relief to any of us normal mortals who can’t bear the thought of a horse, or any animal, being strapped to a wall to make sure they’re staying still.”

“The last thing you want to do is have him running around the box and misbehaving, but he hasn’t, he’s been very, very good.

“He’s got three months of box rest ahead of him, but he is monitored the whole time and his box is right next door to Nicky’s house.”

Buzz’s Coral Hurdle run saw him head the market for the Stayers’ Hurdle at the Cheltenham Festival at one stage, with next-door neighbour Champ now the most-fancied Seven Barrows occupant for the big race race in March.

“Buzz is in an A1 position, he’s next to Champ and he’s probably putting his head over the stable door and saying ‘well if I can’t win the Stayers’ Hurdle, you better go and win it’,” said Stafford.

“There’s a constant flow of carrots and he can now look over the stable door and survey the scene at Seven Barrows.

“It’s rather remarkable, the following he has got on social media, but it’s marvellous. Maybe it’s because he’s a grey and he’s won over hurdles and won the Cesarewitch, from Aintree to Newmarket was quite a move.

“There’s still quite a long way to go yet, we’ve got to get through this box rest and then at the next scan we will just hope things are mending properly.”