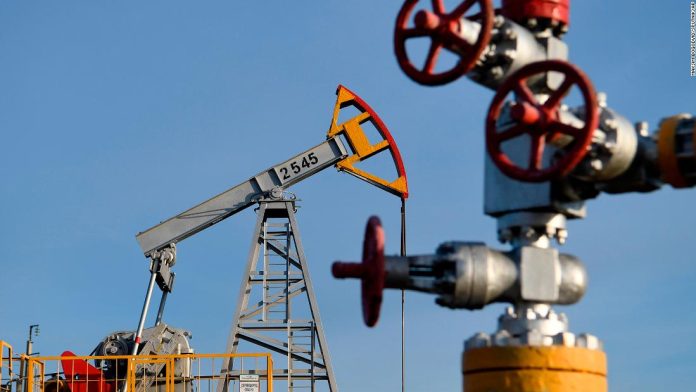 The forecast underscores how a potential invasion of Ukraine would cause wide-ranging ripple effects that would be felt by inflation-weary consumers around the world.
“Any disruptions to oil flows from Russia in a context of low spare capacity in other regions could easily send oil prices to $120,” Natasha Kaneva, JPMorgan’s head of global commodities strategy, wrote in the report published late Tuesday.
Such a spike from about $91 today would drive up prices at the pump, which hit a fresh seven-year high on Wednesday.
JPMorgan warned that if Russian oil exports are cut in half, Brent oil prices would likely race to $150 a barrel. The all-time high for oil prices was set in July 2008, when Brent spiked to a record at $147.50 a barrel.

How oil supplies could be threatened

Russia-Ukraine tensions have helped inflate oil prices in recent weeks. Brent crude hit a fresh seven-year high of $94 a barrel on Monday, although it has since retreated to around $91.
Russia is the world’s No. 2 producer of both oil and natural gas, second only to the United States for each category. The country plays a key role at OPEC+, the producer group that has only gradually added back production that was sidelined during the onset of Covid.
The Russia-Ukraine crisis poses several risks to the oil market.
First, such a conflict could potentially damage energy infrastructure in the region. Secondly, Western powers could seek to punish Russia by imposing sanctions that cripple the country’s energy exports, although US officials have signaled a preference for penalizing other sectors of its economy first.
And then there is the risk that Russian President Vladimir Putin retaliates by weaponizing exports of oil and natural gas. Higher natural gas prices in Europe would drive up oil demand as factories and power plants switch to oil instead.

Prices at the pump are at seven-year highs

Oil prices have cooled off a bit in recent days on hopes of easing Russia-Ukraine tensions, as well as signs of progress on reaching a new Iranian nuclear deal.
Gas prices, which move with a lag to oil, are still catching up to the recent oil surge. The national average for gas hit $3.47 a gallon on Wednesday, up seven cents in the past week alone, according to AAA.
Despite the Russia-Ukraine standoff, the Energy Department’s forecasting arm is projecting energy prices will cool off later this year as supply finally meets demand.
The US Energy Information Administration projects gasoline prices will average $3.24 a gallon this year. That’s below current levels, although it is above the EIA’s December forecast for $2.88 a gallon in 2022.
The EIA expects prices at the pump will slide below $3 a gallon in the final quarter of this year and Brent crude to tumble to an average of $68 a barrel for all of 2023.
Russia is also leading producer of natural gas — and its biggest customer is Europe, which is already grappling with very high home heating costs.
“A disruption in exports on any of the major pipelines could place Europe’s natural gas balance in a precarious situation, particularly given that 2022 started with record-low European gas inventories,” JPMorgan warned.