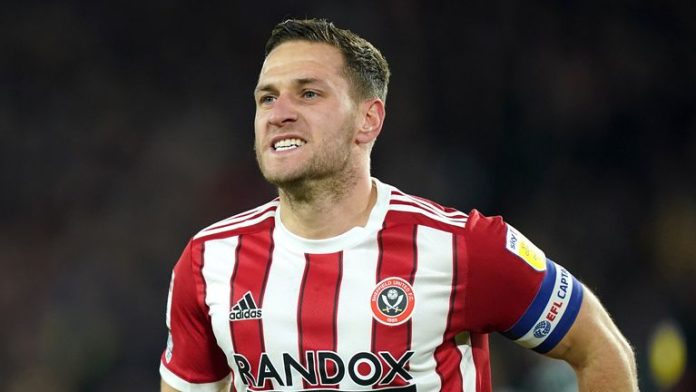 Billy Sharp bagged a brace to seal Sheffield United a 2-0 win over 10-man West Brom and move them one point off the Championship play-off places.

In a crucial contest for the Blades’ top-six prospects, Sharp took his tally to four goals in three games after netting either side of a Jake Livermore 39th-minute red card for dangerous play.

The result also represented a losing start for new boss Steve Bruce with the Baggies having now failed to net for five consecutive away contests, equalling the club’s worst sequence since 1923.

After Chris Basham cleared the crossbar from the edge of the box having exchanged passes with David McGoldrick, it was the visitors that threatened the most during the early exchanges.

Home defenders Basham and Jack Robinson were then fortunate to escape punishment after giving away possession deep in their own half, with Livermore shooting tamely at Wes Foderingham and Reach wayward from 25 yards.

Sharp was in no mood for profligacy, however, when he opened the scoring midway through the half after McGoldrick threaded a perfect pass down the left for George Baldock to chase.

He then picked out Sharp, whose 10-yard shot beat Sam Johnstone after deflecting off Mowatt.

The Baggies wasted an excellent chance to level when Grady Diangana showed horrendous hesitancy after being played clear on goal by Reach, allowing John Egan to make up 10 yards to block his eventual attempt.

Sharp then swivelled and blasted straight at Johnstone after the ball had bounced up invitingly in the box and the evergreen 36-year-old was also flagged offside after netting expertly from Conor Hourihane’s left-wing cross.

Albion’s task was made even trickier moments later when Livermore was dismissed after scything down Hourihane 10 yards inside the home half.

After the break, Johnstone did well to save low to his left from Jayden Bogle’s firm, 15-yard drive.

At the other end, Matt Clarke then headed well wide following Mowatt’s free-kick before the Baggies keeper thrust out his left arm again to deny Iliman Ndiaye after Sharp and McGoldrick had combined to send the 21-year-old Frenchman clear on goal.

Reach, meanwhile, directed a weak shot straight at Foderingham after Karlan Grant had nutmegged Basham through the left channel.

A close-range header by Basham subsequently flashed wide for the hosts before Sharp put the outcome beyond doubt in the 80th minute.

Substitute Morgan Gibbs-White swapped passes down the right with Bogle before running into the box towards Sharp, who took responsibility by bending a brilliant 15-yard strike beyond Johnstone’s despairing dive to his left to wrap up an eighth win in 10 Championship contests for the in-form Blades.

Sheffield United’s Paul Heckingbottom: “They beat us down there and, if a team want to put the ball in your box, you can’t stop them, but tonight we won every first or second contact and all their efforts on goal came from outside the box, which was pleasing. Three points is everything and I’m pleased that we’ve got them against a top team with a good squad and a manager now who knows his way around this league better than anyone.

“It was a vital result for us because it’s moved us a point outside of the play-offs and it was three points taken from a team who will be up there and will only be moving upwards from now on. There’s no better man for chances to
fall to [than Billy Sharp] and he’s back among the goals because of the energy we are playing with up there and the opportunities that’s creating.”

West Brom’s Steve Bruce: “Up until the red card, even though we were a goal down, I thought we were the better side. I also thought the red card was harsh. I felt it was a decent challenge and there was one close to me 15 minutes earlier that the referee did not even give a free-kick for, let alone a yellow card, so it’s about the consistency you’re always looking for. I don’t think Jake’s tackle was dangerous or reckless at all and he’s also got to bear in mind that, when you give a red card, it spoils the spectacle, because it was a good game up to then, but playing with 10 men gave us a lot to do.

“Having said that, we were still in it going into the last 10 minutes after our keeper made two excellent saves, but we huffed and puffed and couldn’t make the breakthrough before Billy Sharp scored an excellent second goal for them. We’ve now got to find that cutting edge because Granty [Karlan Grant] has got 10 goals but, apart from that, nobody has got many and that’s what we’ve got to work on and why I’m here.”

Shields vs Marshall ‘signed’ for undisputed clash in September