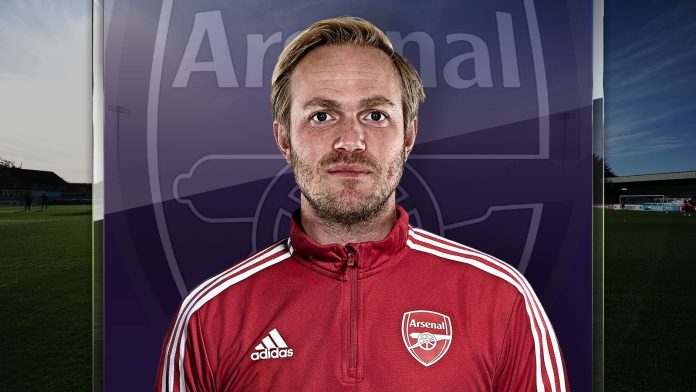 As Jonas Eidevall prepares to take Women’s Super League leaders Arsenal to second-placed Chelsea the head coach is placing little emphasis on the table, instead focusing on his players’ belief, development and ability to overcome adversity.

Arsenal travel to Chelsea on Friday with a two-point lead at the top, looking to secure a domestic double over the reigning champions after beginning their title charge in sensational style with a 3-2 victory at the Emirates in their opening game of the season.

While it was a result Eidevall and his team take plenty of belief from as they get set to face Emma Hayes’ Blues, the Swede insists the idea of the return fixture being labelled a ‘title-decider’ is premature.

In an exclusive interview with Sky Sports, Eidevall said: “It fills us with a lot of belief going into Friday knowing everything is possible if we perform to our levels.

“It’s the most important game because it’s the next one. It’s three points in this game, like in any other in the league.

“We’re going to bring everything for it and, in the end, we will see how much it’s worth, winning the game on Friday.

“Of course we will try and do everything to win.

Jonas Eidevall hopes Arsenal’s win over Chelsea at the Emirates in their first game of the season ‘was a sign’ of how the reverse fixture may unfold when they meet at the top of the Women’s Super League on Friday.

‘We will get much, much better’

Having replaced Joe Montemurro as head coach last summer, Eidevall has spent this season instilling his playing identity and is “looking forward” to evolving the team over time, as he warned his side is yet to peak.

“We’ve played 25 games so far this season. We’ve played with 19 different central defender combinations in those 25 games. That’s no time in developing relationships,” he said.

“Of course I have a belief and an idea that we will get much, much better together once we start practising together and fine-tuning those relationships and those roles and responsibilities.

“There, I really see a lot of potential.

“It’s all about what adversities we’ve overcome. It’s so important for us that we don’t think we are the finished product or a product that cannot develop anymore just because we have come halfway through this season.

“We need to continue to develop, not only for this season but for next season as well.

“I think we have a never give up mentality – always trying to make the most of all situations, which is very important.

“For me, it always starts with belief. It cannot start with success as the starting point. Belief creates success.

“Whenever we get the chance to practise together and to fine-tune things, I see development. That’s why I’m optimistic about the future and see we can develop this much, much further than we already have.

“I’m looking forward to it.”

Highlights of the Women’s Super League match between Arsenal and Manchester United.

A first goal for new Arsenal signing Stina Blackstenius rescued a point against Manchester United last time out, while Chelsea – who have a game in hand on the leaders – enter the match on the back of victory over Manchester City.

Eidevall is spending plenty of time studying the strengths and weaknesses of Friday’s opponents, but says he will be paying “very little” attention to the performances and results of his title rivals during the remainder of the season.

Jonas Eidevall says he is spending a lot of time studying opponents Chelsea but generally places little focus on Arsenal’s title challengers, unless preparing his side to face them.

“Right now I’m spending a lot of time understanding Chelsea with what makes them good and what their weaknesses are and so on,” he added.

“I’m a big fan of spending a lot of time on things you can control and that will affect your own performances.

“If you want to survive as a head coach, you have to be positive.

“I enjoy it. It makes me feel very alive and I look forward to Friday.”

British teenager dies in Turkey after getting into trouble while swimming