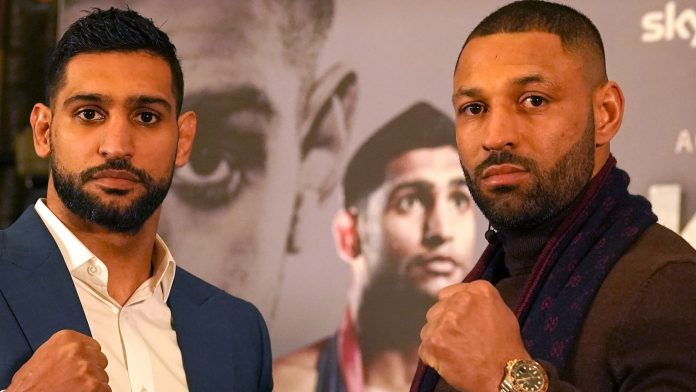 Amir Khan says opponent Kell Brook was “always smoke, always talk” in what could be a career-defining fight for the Bolton fighter on Saturday, February 19, live on Sky Sports Box Office.

Khan and Brook’s lengthy rivalry, which stems from their teenage years, will finally be settled at Manchester’s AO Arena in Britain’s biggest grudge match for years.

“One of the reasons why I took the fight was because of the public demand,” Khan told Sky Sports. “The first press conference showed that we don’t really like each other. It’s war! We’re going to go in there and it’s going to be a fight.

“We’re not friends and obviously we do dislike each other, but I’m going to show people why I’m the better fighter on fight night.

Khan v Brook: The Gloves Are Off

Khan admits the last 10 weeks spent training with former opponent Terence Crawford and under the watchful eye of trainer BoMac in Colorado Springs and Omaha, Nebraska in the US have been “brutal”.

“I know I’ve done everything that I’ve needed to to go into this fight. I’m fit, ready and strong to win this fight. It’s going to be tough but I’m going to go in there and do what I do best,” he said.

“I feel sharp, I feel good, the weight’s amazing – I’m literally there on the weight, so I can’t wait to get in the ring and fight.”

Khan, who is a former unified super-lightweight world champion but has not boxed for almost three years, says he won’t have any problems reaching the agreed catch-weight of 149 pounds for the big fight, which is closing in fast.

“I wanted the fight at 147, but Kell didn’t want to do the fight at 147. He wanted to do 149 so obviously we had to agree with that and I agreed with it, but it gives me another couple of pounds of muscle to put on and strength so come fight night I’ll be a lot more stronger,” Khan said.

“It’s going to be the first time where I’m going to be at a weight where I feel comfortable.”

Khan has been complimented on looking lean again by his wife, Faryal Makhdoom, after the fighter admitted putting on a few extra pounds during the pandemic.

But he is now ready to walk into a UK ring again for the first time since his unanimous points victory against Colombian Samuel Vargas in Birmingham four years ago.

“It’s a great fight for the fans,” he said. “The fans are going to see an electric fight because both of us have trained hard and we’ve talked a lot about this fight so I’m sure Kell’s going to be ready as well because not only is he’s not only going to talk and not come in in shape for this fight – I’m sure he’s going to be more than fit and ready.”