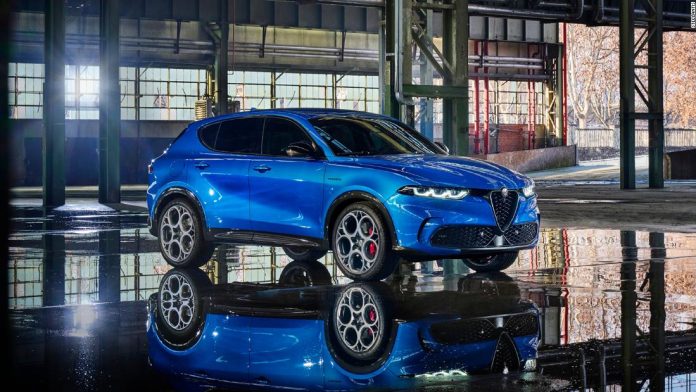 Alfa Romeo does have its ardent fans in the United States. There are dozens of clubs for “Alfisti,” as Alfa Romeo fans call themselves (singular: “Alfista”). But, while Alfa Romeo sells far more cars than those exotic brands, its sales numbers are tiny compared to its German luxury competitors that sell hundreds of thousands of vehicles in the United States each year. Even South Korea’s Genesis sold more than twice as many vehicles as Alfa Romeo’s roughly 18,000 units in 2021, according to data from the automotive website Edmunds.com.
For Alfa to have any hope of greatly increasing its sales, a new SUV is badly needed. Alfa Romeo’s current line-up is the opposite of a traditionally sumptuous Italian meal. At this feast, only two plates are now being served. There is a sedan, the Giulia, and one mid-size SUV, the Stelvio. SUVs are far more popular than sedans in the US, and Alfa’s German competitors offer countless different ones in various sizes and body styles.
Alfa Romeo, Italy’s competitor to brands like BMW and Mercedes-Benz, is hoping a new, smaller SUV, the Tonale, will help. Pronounced “toe-NAH-leh,” the new offering is a badly needed addition to Alfa Romeo’s minimal line-up.
The Tonale, unveiled on Tuesday, will go on sale in the United States early next year. It will be available to American customers in two versions: a 272-horsepower plugin hybrid with about 30 miles of all-electric driving range and a 256-horsepower gasoline-only SUV. Both will have all-wheel-drive. Alfa Romeo has not yet announced pricing for the Tonale.
Alfa faces other challenge besides its limited line-up. As it first entered the US market around 2017, the Giulia received glowing reviews for its attractive design and its quick and entertaining driving performance. It was even named Motor Trend’s Car or the Year that year.
Reliability was another matter, though. In Consumer Reports, arguably the most influential resource among American auto buyers, Alfa Romeo has received poor ratings for Predicted Reliability. Auto enthusiast publications like Car & Driver and Jalopnik also reported “unforgivable reliability issues” and critical software failures with early cars they tested.
Larry Dominique, head of the Alfa Romeo brand in the US, insists that’s changing. Based on the brand’s internal tallies of repairs, problems on more recent models are a small fraction of what what they once had been, he said.
Unfortunately for Alfa Romeo, the brand’s sales have dropped in recent years after an initial rush when the Giulia and Stelvio first hit the market, said Jake Fisher, head of auto testing at Consumer Reports. That means there haven’t been enough more recently built Alfa Romeo models among Consumer Reports subscribers, the people who are surveyed to gather reliability data, for the publication to update its ratings.
“Reliability was a nightmare,” Fisher said. “Then they kind of just fell off the map just because of their sales.”
That’s left an impression of problematic vehicles even if, assuming Dominique is correct, things have improved.
Alfa Romeo is also introducing something to, hopefully, address concerns future owners may have about a used Alfa Romeo’s maintenance and repair history. Tonale buyers will be able to have an NFT — a digital non-fungible token — that will store records any time the car is serviced or worked on. Alfa Romeo hopes that this will help with the SUV’s resale value, something that’s been a problem for the brand. According to data from Edmunds.com, the value of three-year-old Alfa Romeos, as a percentage of their original cost, is among the lowest of all major luxury brands.
Reliability issues aside, Alfa Romeos are just not for everyone. The Giulia and Stelvio have a more aggressive sound and driving feel than typical sedans and SUVs. Drivers looking for a more relaxed luxury car experience, like Mercedes buyers, for instance, could be put off by an Alfa’s edginess.
“The main feedback I get from our customers as to why they bought Alfa Romeo is that It’s not German, it’s something different,” said Dominique.
That peppery flavor is what Alfa is selling. The brand’s 21st-century reintroduction to America was led by the Alfa Romeo 4C sports car in 2014, a model that is no longer available. Even compared to other sports cars, the 4C was extremely impractical. It had no power steering and a tiny steering wheel, so maneuvering at low speeds provided a gym-quality upper arm workout. The four-cylinder engine, mounted right behind the car’s two seats, produced a high-volume snarl that made the stereo nearly pointless. With stiff suspension, ride comfort depended entirely on the quality of the asphalt under the tires. But, on a good road on a nice day, the Alfa Romeo 4C could be outrageously fun, providing an Italian exotic car look and driving experience at a fraction of the price.
The Giulia and Stelvio offer some of that fun and excitement but with less noise, better ride quality and more passenger and cargo space. They retain an emphasis on quick steering and good handling. The new Tonale, Dominique said, will allow a driver to tone things down a bit more than they can in either of the current models.
“It’s an opportunity to bring more of a lifestyle,” Dominique said, “making sure we have all the technologies and all the comforts for driver and passenger that make a great vehicle for two people or a family or whatever it might be, but it still delivers on the excitement and the energy and the fun that Alfa brings.”
There are plans to expand the model line-up further so there could be even more family-oriented vehicles in the future, Dominique said. Alfa Romeo has also announced it will become all-electric by 2027. The challenge will be to manage these transitions to more practical and more environmentally sensitive products without losing the Alfisti along the way.
“As volume grows, if eventually we [sell] 200,000 units, great,” he said. “But if we stay smaller, but we deliver on all those attributes and we have high loyalty, we’re fine with that, too.”